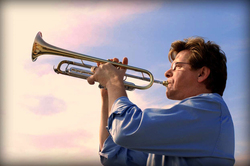 The performance is a feature of the College of Fine Arts' 2013-2014 University Series, "Live Out Loud."

A much sought-after trumpeter, Bergeron is one of the most active musicians in the world with studio dates, international touring, jazz concerts and guest solo appearances, according to John W. Goodall, associate dean of the College of Fine Arts.

"As a sideman, Bergeron's list of CD credits reads like a who's who in contemporary jazz and pop, running the stylistic gamut from Ray Charles to Green Day," Goodall said. "It's going to be exciting to see him perform with our jazz band students, and it will be a memorable experience for them."

According to his website at waynebergeron.com/home.html, Bergeron landed the lead trumpet position with the Maynard Ferguson Band in 1986 and can be heard on such recordings as "Body & Soul," "Big Bop Nouveau," "Brass Attitude" and "The One & Only Maynard Ferguson."

Bergeron has worked on more than 300 TV and motion picture soundtracks. A partial list of film credits includes "Toy Story 3," "Despicable Me," "Sorcerer's Apprentice," "Star Trek," "National Treasure," "Marley & Me," "Superman Returns," "Pirates of the Caribbean," "Dreamgirls" and "Hairspray." His featured trumpet solos can be heard on the motion pictures "The Green Hornet," "Duplicity," "Rocky Balboa," "The Incredibles" and many others.

After being behind the scenes for many years, Bergeron stepped out on his own with his first solo effort "You Call This a Living?" This debut project earned him a Grammy nomination in 2004 for Best Large Jazz Ensemble as well as rave reviews from fans and press worldwide. His latest recording, "Plays Well With Others," was released in 2007 and is being met with the same acclaim, according to the website.

Among Bergeron's signature tunes to be performed with the Swingin' Axes are "High Clouds and a Good Chance of Wayne Tonight," arranged by Tom Kubis, and "Maynard and Waynard" by Gordon Goodwin.

Prior to the concert, there will be a 7 p.m. informative talk about the artist and his music in Griffith Gallery located across the hall from Turner Auditorium. The audience is invited back to the gallery for a post-performance reception.