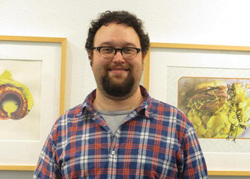 The Jones scholarship, established by the SFA Friends of the Visual Arts, is awarded on an annual basis to a junior, senior or graduate level student with drawing or printmaking as his/her major study area. Students must show initiative and a broad appreciation of all of the fine arts with a concentration on printmaking, according to the eligibility criteria established by Jones.

Nominated by Neal W. Cox, associate professor of art and printmaking coordinator, Herbert is Cox's teaching assistant and will teach a printmaking class in the fall. It is the second time for him to receive the award.

"Not only is he a great help in my work, he is also producing great work of his own, and is helping his fellow classmates to succeed," Cox wrote of Herbert in his nomination letter. "He contributes to the studio environment by having a great attitude and striving for excellence. He excels in printmaking, digital media and photography not to mention his reported excellence in art history.

"Carlton is the type of student who is the first to arrive and the last to leave," Cox wrote. "Considering the fact that he commutes to Nacogdoches from Longview, his work ethic and commitment is astounding."

Jones is professor emeritus in the SFA School of Art where he taught printmaking, drawing, Mexican art history and the "Art of The Book" from 1971 to 2011. During that time, he was named a Regents Professor and received a Distinguished Professor Award from the Alumni Association and a Teaching Excellence Award from the university. He is now the director and master printer for the LaNana Creek Press in the College of Fine Arts and has had exhibitions of his work worldwide.

The SFA Friends of the Visual Arts is made up of community members who support the arts in East Texas and provide monetary assistance to students enrolled in the School of Art by conducting fundraisers, such as the upcoming annual 12 x 12 event in July.