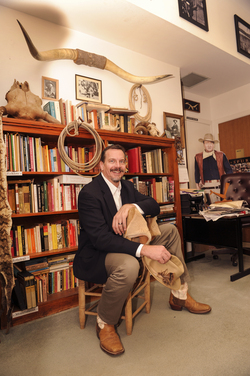 From the outside, the casual observer might not notice anything unusual about the small office tucked away among the regular business operations on the first floor of the Rusk Building on the SFA campus, but a glance inside reveals the roots of an organization stretching back more than a century.

Amid countless books and artifacts ranging from antique toys and rusty pieces of history to vintage furniture and a cardboard cutout of John Wayne is the home of an organization with beginnings in the campfires and cowboys of Texas lore.

In 1909, when noted historian John Lomax went to Harvard University with a lifetime's knowledge of cowboy tunes and customs learned from the people who lived the iconic Texas lifestyle, he was laying the foundation for what is now the longest-existing, state-based folklore organization - the Texas Folklore Society.

And arguably no other organization has done as much to preserve the roots of traditions that people throughout Texas, the Southwest and world know, but don't have a name for, said Dr. Kenneth Untiedt.

"You know about folklore, but you maybe don't know it by that term," said Untiedt, a towering former lawman, professor of English and the society's secretary-editor for the past decade. "People are already interested in folklore. They just don't know it's folklore."

The Texas Folklore Society's mission is to preserve in books, papers and presentations the traditions and customs that make up cultural identity in Texas and the Southwest, all the while keeping it vibrant and alive.

This year, the society will publish the 70th edition of its annual book series - this volume being a collection of stories and customs, as well as recipes deriving from foods from all across the state. The society has been responsible for more than a hundred books chronicling the cultural knowledge of Texas and the Southwest, including more than two-dozen single-author publications, Untiedt said.

To Frances Vick, those books represent more than just something that put food on her family's table for years, but a noble endeavor. The SFA alumna had more than a casual role in publishing many of those books. She was a founder and owner of the E-Heart Press, which operated in the late 1970s and took its name from some of her own family's folklore - their cattle brand from the 1850s.

"It's the most important thing professionally that ever happened to me," Vick says of her work with the Texas Folklore Society. "I cannot stress enough what the [society] meant to me."

In their own tradition, Vick's family members are all part of the society, and her son is a member of the board. She is one of only 14 people in the society's 105-year history to be awarded the position of fellow.

"We desperately need to know where we come from - our culture, our values passed down to us from our families," she said.

For someone whose family has long-standing ties to SFA - her father graduated from the university in 1932 - Vick says there is pride in knowing she's helped spread the university's name around the world.

Each of the Texas Folklore Society's publications carries the university's name stamped somewhere on it, and those publications are resources for folklorists around the globe, Vick and Untiedt agree.

The relationship isn't one sided, though. Untiedt said the university has been a wonderful home for the society since legendary East Texas folklorist and society secretary-editor emeritus Dr. Francis Abernethy, who passed away in March, relocated it to SFA in 1971.

"Once we got here, we were a perfect fit," Untiedt said.

Untiedt added that the overwhelming support of the university, its faculty and staff members, and other regional history and cultural organizations at SFA have allowed the Texas Folklore Society to continue to flourish in its mission.

While Texas Folklore Society members like Vick and Untiedt take folklore and their jobs seriously, that doesn't mean the tall tales, traditions and stories they work with get reduced to dry academic papers.

In fact, Texas Folklore Society members will tell you that's precisely what they avoid during their annual meetings. After all, a full third of the weekend-long conferences are what even the society's official literature affectionately calls the Hootenanny.

Asked what he thought the role of the society should be, Abernethy said it was "to preserve folklore without embalming it … I do not believe that our purpose is to proliferate esoterica and pedantry among a small, specially educated clique."

That's the spirit of the meeting and Hootenanny, which is as much live music, storytelling and cowboy poetry as it is the presentation of formal papers.

That friendly, informal atmosphere is what has attracted some big names to the society over the years, Untiedt said, names like storyteller and official Best Liar in Texas Donna Ingham, Western author Elmer Kelton, who has been voted the best western author of all time, and Texas' poet laureate Jan Seale.

"Everyone should come to a meeting," Vick said with a laugh. "It's like a family reunion."

Likewise, Untiedt encourages anyone with an interest to join the Texas Folklore Society and attend one of the meetings. Who knows, you might even walk away with a story for the ages yourself.