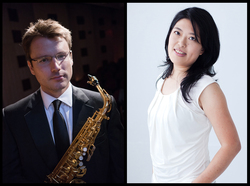 Nabb selected two of his favorite pieces to be performed - the Sonata in A major (originally for violin) by César Franck and Sonata by William Albright.

"I chose these pieces because they are two of my all-time favorite works," Nabb said, "but also because I have the privilege of performing with my long-time friend and collaborator, Chialing Hsieh, who brings such a depth of understanding and nuance to this music."

Originally written as a wedding present for the young virtuoso violinist Eugene Ysaÿe, the four-movement Sonata in A major received its premiere in December of 1886, and has since been performed on many other string and wind instruments, though Franck only officially approved the alternate cello version, Nabb explained. This version is an adaptation by French saxophonist Jean-Yves Fourmeau.

Nabb described Albright's Sonata as "a very personal piece," which was written shortly after one of his close friends and mentors, George Caccioppo, passed away. It is dedicated to his memory.

"This work, characteristic of Albright's style, blends ancient music and aesthetics with modern sounds and compositional devices," Nabb said. "I think this dramatic work is a fascinating counterpart to the Franck piece."

Hsieh is an active solo and collaborative pianist with a large repertoire of both standard and lesser-known works from the Baroque to the present. She is a music instructor at Morehead State University in Kentucky where she also directs the piano accompanying program, and she also serves on the faculty of Lutheran Summer Music Academy. She performs at a variety of regional and national conferences and accompanies at competitions throughout the United States.