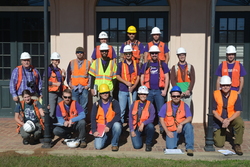 Last semester, 17 Stephen F. Austin State University forestry students from the Arthur Temple College of Forestry and Agriculture developed a comprehensive land-management plan for the Port Jefferson History and Nature Center, located in Jefferson, Texas. The plans, which were presented to members of Collins Academy, included recommendations for the removal of invasive species, the enhancement of wildlife habitat and wetlands development.

NACOGDOCHES, Texas - As spring approaches, the City of Jefferson and Collins Academy, a program developed to create educational and economic opportunities for the community, prepare to institute land management recommendations provided by students in Stephen F. Austin State University's Arthur Temple College of Forestry and Agriculture for the Port Jefferson History and Nature Center.

Developed by students enrolled in the college's forest management plans course, the recommendations focused on the creation of a Geographic Information Systems database, which will assist the center in achieving land-management goals. The U.S. Army Corps of Engineers completed the basic infrastructure for the center in June 2013. However, until the partnership with SFA's Arthur Temple College of Forestry and Agriculture, the park operated without a written management plan.

The students' plans also sought to improve and expand habitat for threatened species such as the Neches River rose-mallow and Rafinesque's Big-eared bat. Milkweed gardens and butterfly nectar plants also were recommended in the core section of the Port Jefferson area.

"The work of this capstone class is providing what Collins Academy and the City of Jefferson need for improved park operations now and into the future," said Municipal Judge Mike Gannon, business manager for Collins Academy. "The real people, real places and real problems slogan for the Arthur Temple College of Forestry and Agriculture has real meaning."

On Dec. 5, 2014, students presented their final recommendations to representatives of Collins Academy and the City of Jefferson. Posters depicting management recommendations accompanied their explanations.

"These soon-to-be professional foresters are on the cutting edge of their discipline," he said. "Focusing their knowledge and skills on a management plan for our park is a huge benefit to Jefferson and the entire region."

Students from the college will continue to assist the center's staff as they begin planting a butterfly garden and removing invasive species. Updates to the nature center's GIS database also will reflect progress made as the collaboration evolves.

Collins Academy is a program of the Today Foundation, formed by Dallas native Richard Collins. In addition to preserving historic sites, the academy establishes national heritage areas in Jefferson and offers a variety of programs that create opportunities for students and families, focusing on nature and the environment, history and preservation, life skills and economic growth.

For more information regarding this project or the Arthur Temple College of Forestry and Agriculture, call (936)468-3301 or visit atcofa.sfasu.edu.