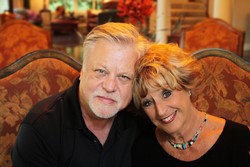 NACOGDOCHES, Texas - An informal, intimate evening with two of the most beloved performers in East Texas is a must-see event when the Friends of Theatre at Stephen F. Austin State University host a reading of A.R. Gurney's "Love Letters" at 7:30 p.m. Friday, Sept. 9, in W.M. Turner Auditorium on the SFA campus.

Brad Maule and Rhonda Plymate Simmons will perform close to the audience and conclude the reading with a casual conversation with everyone in attendance. Proceeds from the event will provide scholarship opportunities for students in the SFA School of Theatre.

"Love Letters" is a play that depicts a life-long romance conducted almost entirely through the mail, according to Scott Shattuck, who will direct the reading. Gurney, the play's author, may be best known for having written the Broadway play and the film "Sylvia," in which a woman plays a dog adopted by a married couple, according to Shattuck.

"'Love Letters' is written to be performed as 'reader's theatre' where two actors (a man and a woman) sit side by side with scripts open and perform the play with minimal movement or other theatrical spectacle," Shattuck said. "Their relationship begins with a simple thank-you note from one child to another and extends through several decades of successful, complicated lives lived mostly separately but always with an undercurrent of powerful connection between the two.

"It is funny, poignant and surprisingly suspenseful as the audience becomes rapt in the ups and downs and very human surprises of this singular relationship," he said.

The inspiration for the reading came when Simmons, who is the longtime president of the Friends of Theatre, expressed a desire to raise funds for the students of the School of Theatre.

"She and Brad had been hoping for a chance to perform together again after the fun they had appearing in the School of Theatre's Mainstage Series production of 'August: Osage County' in the spring of 2015," Shattuck said. "Gurney's play presents an ideal opportunity."

The Friends of Theatre is the local community support organization for SFA's School of Theatre. Generous Nacogdoches community members contribute and raise funds for scholarships, awards and other projects that benefit theatre students and the school's theatre productions. They also provide hospitality for guest artists such as the playwrights that come to Nacogdoches for Jack Heifner's biennial Festival of New American Plays.

"Members also serve as advocates for theatre by influencing other community members to attend productions and support our work," Shattuck said.

Recently, the School of Theatre used Friends of Theatre funding, in part, to provide scholarships for students who traveled in 2015 to Edinburgh, Scotland, to perform in the International College Theatre Festival at the renowned Festival Fringe and who traveled this past June to Ireland to study Irish theatre, culture, history and literature.

"Hopefully, the proceeds from this reading will replenish these funds to give the school the flexibility to award scholarships or other support for similarly exciting opportunities in years to come," Shattuck said.

Maule is a faculty member of the schools of Theatre and Art at SFA. Before returning to his alma mater in Nacogdoches, he spent 22 years as a star of television's "General Hospital," earning two Daytime Emmy Nominations for his acting, and as a guest star on dozens of primetime series. He is well known in Deep East Texas not only for his television and commercial appearances but for his long-running radio talk show, Maule in the Morning (which recently concluded its run on Lufkin's KSFA) and his support of countless local charity events and businesses.

Simmons was a professional actor and singer in Dallas and New York City for several years before coming to Nacogdoches to start a family, open a business, and earn a master's degree in theatre at SFA. As a student here, her roles included Mama Rose in "Gypsy" and Portia in "The Merchant of Venice." She later appeared with SFA faculty and staff members in "Murder at the Howard Johnson's" and later in the Summer Repertory Theatre production of "The Beauty Queen of Leenane." She is also owner of Express Employment Professionals serving Nacogdoches and Lufkin.

Shattuck, who recently became associate dean of the College of Fine Arts after nine years as director of the School of Theatre, is the co-author of the textbook "The Director's Vision" Second Edition. At SFA, he has directed productions including "The Arabian Nights," "August: Osage County," "Romeo and Juliet" and "Little Shop of Horrors."