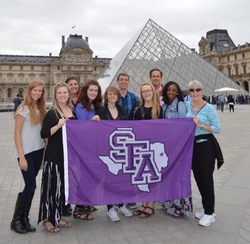 Participants were accompanied on the trip by Dr. John Hendricks, chair of the Department of Mass Communication, and Dr. Linda Bond, associate professor of mass communication.

"Each student was in charge of one segment of the trip," Bond said, "and wrote about the organization both before and after the trip."

A major event occurred while the group was abroad when Britain voted in favor of exiting the European Union. Students were able to discuss the effects of that vote with European citizens.

"Britain's exit, or 'Brexit,' took many Londoners by surprise," Hendricks recalled. "The historic vote was on the mind of many business people the class met. The day after the Brexit vote, the exchange rate of British pounds to American dollars plummeted from 1.58 to 1.15."

As part of the course, students met with Matthew Hall, head of engagement for CIPR. He informed students every organization must have a crisis plan in place and acknowledged that CIPR's crisis plan was already in place to manage changes brought about by the Brexit vote to members of the public relations organization.

The class also met with Kevin Craig, an elected politician in the London government and a candidate for Parliament in the 2005 national elections. He is now managing director of PLMR. He discussed balancing the vote of his political district with his own personal interests and, like many of the business people students met, said he was surprised that Britain had voted to pull out of the union.