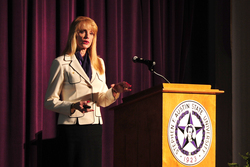 Stephen F. Austin State University Regent Nelda Luce Blair, an attorney and president and owner of The Blair Law Firm in The Woodlands, recently spoke at the second annual Women in STEM Luncheon and Style Show. Blair related stories from the beginning of her own career in a male-dominated field to the current lack of female participation among STEM disciplines.

SFA Regent Nelda Luce Blair - an attorney and president and owner of the Blair Law Firm in The Woodlands - presented to the audience three guiding principles she said comprise some of women's "Super Natural" traits.

"We have a whole bunch of those super natural traits, but we are only going to talk about three today," Blair said, "Optimism, which is very natural to us; encouragement, which we do as an inborn trait; and 'seriously?' I will explain that one later."

Blair related personal struggles she encountered as a female lawyer that mirror issues facing women in STEM disciplines, especially the underrepresentation of females in STEM professions. According to Change the Equation - an organization working to ensure all students are STEM literate through collaboration with schools, communities and states - female STEM students are 6 percent more likely to change their major. Also, only 30 percent of elementary school teachers feel well prepared to encourage girls to participate in science.

"Motivation is the heart of encouragement, because if you give people a motive to do something, that's encouraging them," Blair said. "I bring in women and young girls during the summer and have them work in my law office because it helps them realize they can do anything they want to, just like women pursuing STEM fields."

After detailing personal stories and urging women to "seriously, not to take yourselves or others too seriously," Blair joined a dozen other professional women and female STEM students on the runway to model clothing designs ranging from business to formal wear. Fashions were provided by the Town House, a Nacogdoches boutique.