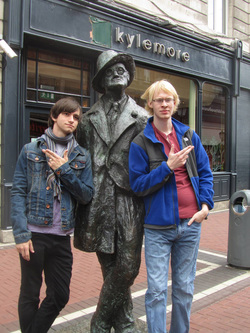 SFA theatre students Gary "Chipper" Morris, left, of Grand Prairie and Tanner O'Neal of Longview pose with the statue of Irish novelist and poet James Joyce in Dublin, Ireland, in 2014.

NACOGDOCHES, Texas - International experience and cultural exchange are at the heart of the biennial trip Stephen F. Austin State University theatre students make to Ireland every other June.

Visiting the sites of major events in Irish history, which is inextricably tied up in the country's dramatic tradition, is another key benefit. Throw in a lot of museum visits and theatre-going, and you have the makings of a once-in-a-lifetime learning experience, according to Dr. Richard Jones, professor of theatre in the SFA School of Theatre.

"Many of the students who go on the trip have never been out of the U.S. before, and simply the day-to-day process of experiencing a different culture, even for a couple of weeks, expands horizons," he said.

Every other summer since 2006, Jones has taken a Summer I theatre class to Ireland where students see Irish plays performed in famous theatres, tour historic sites, and participate in workshops and seminars with noted artists, scholars and theatre administrators. The students will leave June 12 and return June 29, spending 10 days in Dublin and six days in Galway.

Among the more interesting events the SFA students have attended included a poetry reading and book-signing with Nobel laureate Seamus Heaney and Dutch poet Rutger Kopland in 2006 and a one-woman show of "Molly Bloom" (the entire last chapter of 'Ulysses") on Bloomsday night in 2008. A highlight in 2010 was a completely unscheduled tour of the Smock Alley Theatre led by Kristian Marken, the man in charge of converting the space back into a theatre. This same tour with Marken is now a regular part of the trip, along with a visit to the house Oscar Wilde grew up in (a site not open to the general public). There's been a private production of the award-wining "The Cambria" with only the SFA group and a group from the University of California in the audience in 2012, and a workshop with the Abbey Theatre's voice director, Andrea Ainsworth in 2014. The students also visit the Books of Kells and the Long Room at the Old Library at Trinity College. They've done walking tours of both Dublin and Galway, and they're going to an evening of music and story-telling at the Brazen Head Pub (established 1198) for the third time this trip.

The students have done day-trips out of Galway, including one to Inis Mór, the largest of the Aran Islands, and the other to Thoor Ballylee (W.B. Yeats's tower in County Galway), Coole Park (Lady Augusta Gregory's estate, where much of the planning for the Irish Literary Theatre took place), and the monastery ruins at Kilmacduagh.

"This year, for the first time, we can actually go inside Thoor Ballylee, which had been closed for several years because of flood damage," Jones said. "And we're adding the Woodville Walled Garden to that tour this time around. And, of course, we see theatre productions every year. This year will include productions at the Peacock, Abbey and Smock Alley theatres in Dublin and at the Town Hall Theatre in Galway, plus Trad on the Prom, an Irish dance show in the ballroom of a Galway hotel."

This year's trip coincides with the centennial of the Easter Rising.

"We've always covered the Easter Rising in the readings and lectures that precede the trip, but this year promises to be special," Jones said. "When we were there 10 years ago, the 90th anniversary commemorations were everywhere, so the centennial promises to be even crazier."

The students have traditionally toured Kilmainham Gaol (jail), and they've stopped at the GPO (General Post Office, where the proclamation of an independent Ireland was read) on a tour Jones leads up O'Connell Street. This year, the O'Connell Street tour will be incorporated into a commercial walking tour called Revolutionary Dublin, 1913-23.

The students are eagerly anticipating a private session with award-winning Irish writer, performer and musician Little John Nee, who struck up a friendship with SFA students after they watched him perform in his show "Sparkplug" in Galway in 2014.

"I'm not sure how much will be performance and how much will be a seminar, but we're excited, either way," Jones said. "And we were thrilled to hear that John was recently elected to Aosdána, an honorary organization for Irish artists, limited to 250 members."

Other learning sessions will be with Willie White, formerly the artistic director of the Project Arts Centre for several years who is now artistic director of the Dublin Theatre Festival. "He's been kind enough to meet with us every trip," Jones said. "We were also lucky enough to get a seminar with Willie's successor at the Project, Cian O'Brien, and we'll be meeting with him for the third time this trip. We'll also have a seminar with Nicholas Grene, one of the most celebrated scholars of Irish theatre; I think this is the fourth time Nicholas will be joining us.

"Our students are not merely encouraged but required to see other cultural sites," Jones added. "There's a point system requiring students to go to shows, museums, etc., on their own. No specific show or venue is required, but most students find their way to the National Museum of Archeology, the National Gallery, the Dublin Writers Museum, Christchurch Cathedral, the Cliffs of Moher, Galway Cathedral and other venues." 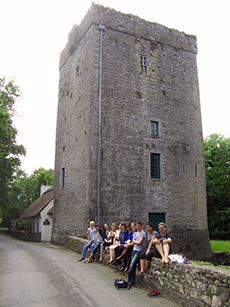 SFA theatre students tour Thoor Ballylee during the School of Theatre's biennial trip to Ireland. This tour and others of historic sites are scheduled again this year when the group makes the trip June 12 through 29.