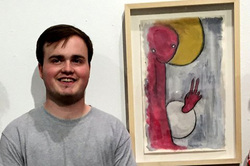 The SFA Friends of the Visual Arts established the scholarship last year in honor of retired SFA School of Art faculty member Gary Parker, who was employed for 31 years in the School of Art where he not only taught courses but also directed the school's Summer Art Academy program for children and served as the gallery preparator.

Jeff Brewer, assistant professor of sculpture and drawing in the School of Art, nominated Welch for the award. Among the Parker scholarship criteria is the expectation that the recipient "must have demonstrated promise in the field of art by using their hands and minds to create art."

"Josh has a passion for sculpture, a genuine excitement for knowledge and the drive to make a difference," Brewer wrote in his recommendation. "He is more than deserving of this scholarship in that he embodies all the ideals that Gary Parker champions. He makes (art) not only with his hands but with his head and heart."

Brewer said he has watched Welch "push" himself, his fellow students and others, including his teachers, toward excellence, and he is always willing to go the extra mile.

"When I need a hand, he is there without prompting and is the last one to leave the studios at night, he said. "Be it Art Alliance, Showcase Saturday, Art Day or keeping me on task, Josh is my 'go-to.'"

Welch will attend a residency this summer in Germany.

"He has what it takes to make it in the art world, and this scholarship will only help propel him faster in that direction," Brewer said.

The SFA Friends of the Visual Arts is made up of community members who support the arts in East Texas and provide monetary assistance to students enrolling in the School of Art by conducting fundraisers, such as the annual 12 X 12 event every July.