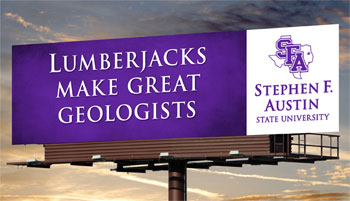 The SFA marketing campaign has launched! SFA messages featuring our traditional spirit logo are now being delivered on billboards and mall signage, on Internet banner ads and the Pandora music app, and on the home page of the university website and its social media accounts.

All 26 SFA billboards are in place in Dallas, Houston and East Texas (Nacogdoches, Athens, Huntington, Kilgore, Lufkin, Marshall and Tyler). In order to highlight each profession being advertised in a variety of locations, in one month the vinyl will be removed from each billboard and shipped to a new location. This rotation will occur again in early June, which is the final month of the campaign.

Our Internet banner ads are optimized for appearance on mobile devices, tablets and desktop computers. Fifteen million impressions will be delivered during the 16-week campaign. The SFA ads will appear 2.5 million times with a 30-second online radio commercial with banner ads on Pandora streaming radio.

Selected graphics representing the ad campaign are being featured on the home page of the university website and on the SFA Facebook and Twitter accounts. The “Lumberjacks make great teachers” graphic was particularly popular – with 793 “likes” and 34 comments posted. It was “shared” on the pages of 110 of our SFA Facebook fans.

SFA ads will appear an additional 375,000 times through banner ads on the Texas Tribune website. Texas Tribune is a nonpartisan, nonprofit media organization that promotes civic engagement and discourse on public policy, politics and other matters of statewide concern.

For more information about the SFA marketing campaign, please visit http://www.sfasu.edu/branding/. If you have questions, call Shirley Luna at 468-2605.