Representatives from the Richards/Carlberg agency were on campus Sunday and presented an update to the Board of Regents regarding the fall media campaign, which includes media purchases of approximately $500,000. Elements of the campaign began appearing in SFA target markets on Sept. 15. 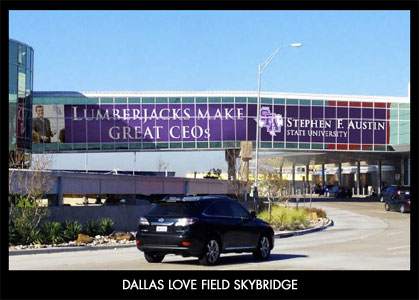 Twenty-five billboards will be posted during the three-month campaign in key market locations, with seven in the Houston area, seven in the Dallas area and the remainder scattered throughout East Texas. Billboard purchases have been geographically targeted to coordinate with areas where SFA Admissions recruiters are visiting, so that high school students will hear from the university in a variety of ways.

The billboard-placement method has been modified to give the campaign a greater impact. Rather than purchasing a location for three months and changing the vinyl on that board each month to promote a new profession, each board location is being rented for just one month. At the end of the month, that vinyl will move to a board in a completely new location. So, in the Dallas area, for example, rather than renting seven boards for three months, SFA has purchased 21 one-month billboard contracts so that seven vinyls appear in locations around the city. Two of the Houston boards will be utilized to briefly promote the Lumberjack football team's Battle of the Piney Woods, and two boards in Nacogdoches will promote the Lumberjack basketball game that will be televised by ESPN2 on Nov. 18.

The professions featured on the billboards are based on responses to a survey that was advertised to and completed by alumni, current students, and members of the faculty and staff. SFA students were recruited to assist in the creation of photography illustrating the new professions, and those photos are featured on many of our SFA advertisements and on the street banners that recently were placed on the light poles around campus. Approximately half of the banners are currently in place, and the remaining half will be installed in the next few weeks.

Mall advertising will again be a major component of the campaign, with banners appearing in the Willowbrook (Houston), Stonebriar Centre (Frisco) and Broadway Square (Tyler) malls. In the Lufkin Mall, SFA advertisements are being utilized on floor banners.

SFA advertisements soon will greet travelers at Love Field Airport in Dallas and at Hobby Airport in Houston. The Love Field airport Skybridge arches over the main entrance to the airport and soon will be adorned by an 11-foot-tall and 108-foot-wide SFA vinyl. In addition to the Skybridge and billboard-style advertisements in the airports, digital ads will be featured on nine electronic screens at Love Field and on eight screens in Hobby. Both the mall and airport advertisements will remain in place through January 2015 to take advantage of the increases in traffic associated with holiday shopping and traveling.

Campaign graphics are being featured on the homepage of the SFA website, on the SFA Facebook and Twitter accounts, and in Facebook and Google ads that are being purchased on a pay-per-click basis. An advertising network service is being utilized so that SFA ads appear in online and mobile platforms based on audience characteristics targeting both prospective students and their parents. Geographically targeted radio advertisements are playing on Pandora streaming radio and will soon be heard on Spotify.

Richards/Carlberg representatives reported to the regents that the ads are performing strongly, but it is important to remember that it takes approximately three years to effect change on an institutional brand. However, we do expect to see incremental indicators of perception change and believe the current efforts will have a positive impact on enrollment in fall 2015.

Meanwhile, planning for the spring advertising campaign is underway, as well as planning for the redesign of the SFA website, which will begin in November. The website redesign will include the selection of a new content management system.