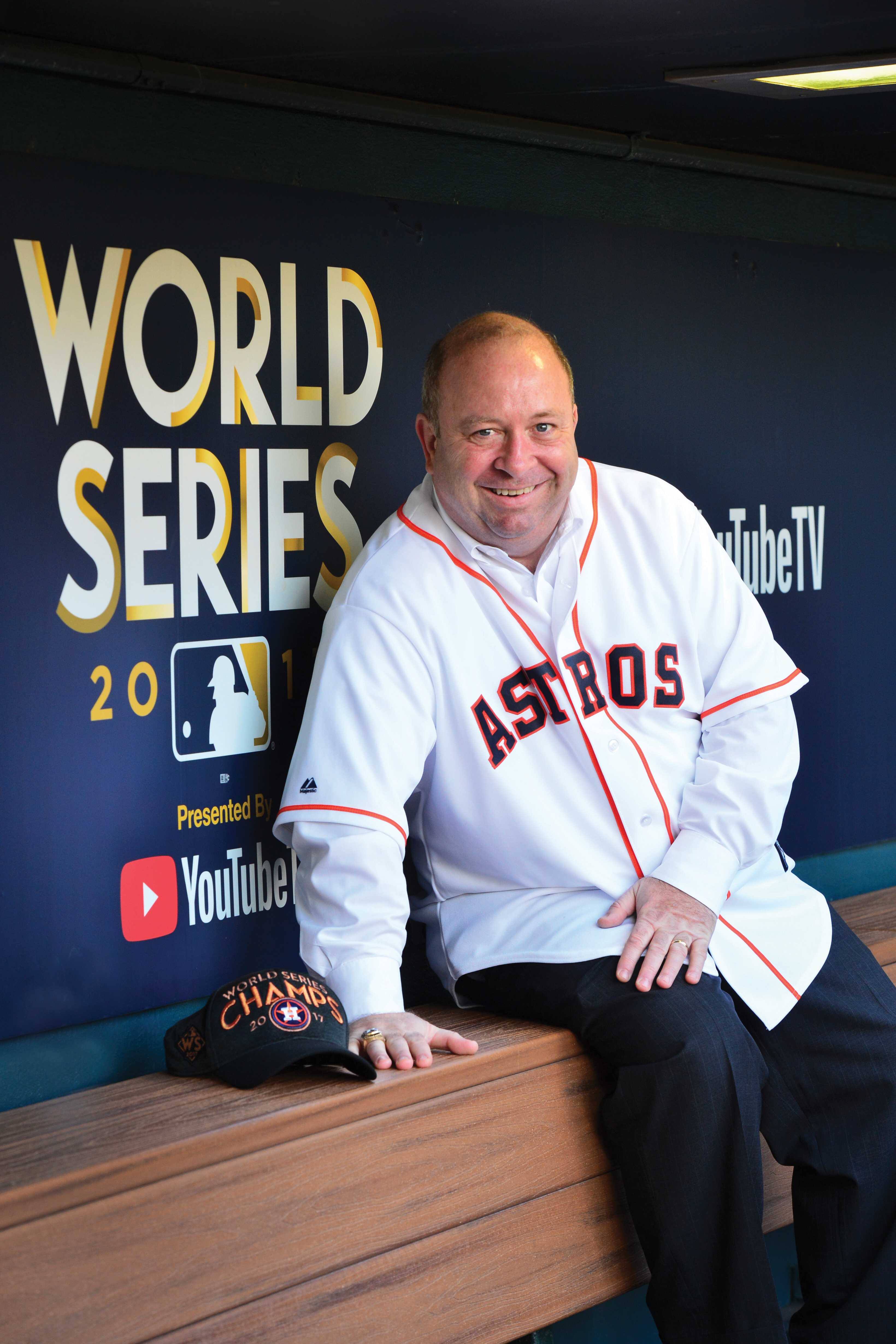 Brent Broussard ’86 rounded third base and stole home plate (figuratively speaking) in 1994 when he went to work for the Houston Astros. During the past 24 years, he has worked his way up in the organization, now serving as a senior account executive for group ticket sales.

With an office space adjacent to the historic Union Station, a building that originally opened in March 1911 as a hub of rail transport and now serves as the cornerstone of Minute Maid Park, Brent is a stone’s throw from the baseball field where the 2017 World Series champions play ball.

Growing up in Houston, Brent attended as many home games as he could.

“Back in the 1970s, my Uncle Jeff came to live with us the summer before his final year of college,” Brent said. “We are both huge baseball fans — especially fans of the Astros.”

Brent said his uncle, Jeff Broussard, was working a summer job as an assistant manager at a Woolworth’s variety store, so he had a little spending money.

“My uncle’s nickname for me is Bud, and I remember during that summer he said, ‘Bud, I have a choice for you to make. We can go to a couple of home games in the Astrodome and sit in the more expensive field box seats, or we can go to a lot of home games and sit in the pavilion.’ That really wasn’t a choice for me. Of course, I chose the pavilion. I think seats were about 50 cents each back then. We attended a lot of games that summer.”

Jeff now lives in Austin but continues to support the Astros by attending all home playoff games and a few games during regular season at the team’s Minute Maid Park facility, the home field for the Astros since 2000. This past fall, Brent was able to reciprocate the generosity his uncle showed him as a young boy by taking him to Game 7 of the World Series in Los Angeles.

According to Jeff, it was a very special moment on Nov. 1, 2017, when he and his nephew were together when the Astros won the World Series.

“It felt like we had kind of come full circle,” Jeff said. “Being there with Brent to witness the Astros’ first World Series win was one of the most-memorable moments of my life.”

As any Major League Baseball fan can attest, winning the World Series is the pinnacle for the fans, players and teams that comprise America’s favorite pastime. Another major highlight is receiving a World Series ring, which is yet another perk of Brent’s affiliation with the Astros.

“The Houston Astros organization provides rings for the players and employees,” Brent said. “I have two rings I’ve received through my employment with the Astros — the 2004 All-Star Game ring and the 2005 National League pennant ring. In April, we are due to receive the 2017 World Series championship ring. Having three rings is very special to me because I have three boys who will each receive one someday.”

Another perk of being an Astros employee is witnessing firsthand the way the organization gives back to the community. Although the team played many games away from Houston in the aftermath of Hurricane Harvey, the players helped with relief efforts and wore jerseys emblazoned with the logo “H Strong” in tribute to the city and its people.

“Although the team had been on the road for an extended period of time, players and other members of the Astros organization volunteered at the George R. Brown Convention Center on a rare day off to help uplift the evacuees staying there,” Brent said. “They visited with evacuees in a showing of solidarity and helped raise millions of dollars toward recovery efforts.”

Decades have passed since Brent was a young boy sitting with his Uncle Jeff in the Astrodome watching the Astros. Those inexpensive seats they occupied during the 1970s have graduated to stadium seating along the first base line where the duo celebrated the Houston Astros’ first World Series win.