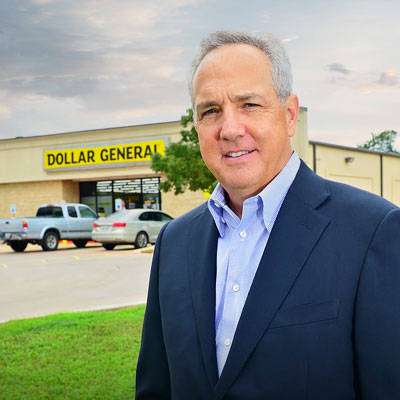 The rolling ladder looked like a good ladder, like you could jump on and wheel around the room in a frenzy or climb its steps to slowly peruse book titles. Although it stood immobile just behind Michael Calbert ’84 as he sat in his wood-paneled office, the object commanded attention.

In fact, Calbert always wanted a rolling ladder, he confessed. And after years of rising through the private equity world, starting with minor accounting positions and ending in his appointment as lead director and chairman of the board of multiple corporations, he was able to include the ladder in the design of his Austin lake house.

It’s hard to not see the ladder in Calbert’s home office as a metaphor for all that he has accomplished in the world of business. Not only did he climb the “corporate ladder,” but his successes in business positioned him to create a home — and a life — that fulfills his own dreams.

“I’m an oddball when it comes to private equity,” Calbert said. “If you go down the list of partners at private equity firms, there are a handful of schools they attended — Harvard, Stanford, Princeton, etc. But I’ve always believed everything would work out if I worked hard, was intellectually curious about everything, and maintained the highest integrity and best reputation.”

And worked out it has. Months after graduating from SFA, Calbert landed a job at Arthur Andersen in Houston, one of the “big five” accounting companies in the country that provides auditing, tax and consulting services to large corporations. This began a string of professional successes that placed Calbert in chairman, board member and chief financial officer positions at some of the largest retailers in the country doing what he loves — “helping ordinary people do extraordinary things.”

“The thing that’s been most enjoyable is solving a problem that helps people, whether it’s a management team struggling with a competitive issue or an accounts payable department that needs to be re-engineered for more efficiency,” he said. “I love being able to unlock a problem that others haven’t been able to unlock. I really love to see people trying to do a good job be successful.”

Life in the Piney Woods

Born in Tyler and raised in Longview, Calbert journeyed to SFA by way of his older brother, Craig ’82.

When he wasn’t participating in activities organized by his fraternity, Sigma Chi, Calbert worked as a cashier at a Diamond Shamrock in Nacogdoches. Those two worlds collided one day when he met Barbara ’84, his wife of more than 30 years.

“When I was pledging Sigma Chi, as part of the process they assign a ‘big sister’ to you (from a sister sorority). You have to try to guess who it is, so they try to throw you off,” Calbert explained. “My ‘big sister’ was in the sorority with my now wife and had (Barbara) call me pretending to be my ‘big sister.’ Later, I figured out who my big sister was, and I didn’t think much about it [the phone call].

“Well, one day, Barbara stopped to get gas, walked in, saw my name tag, and she said, ‘Oh my gosh, you’re the guy I called and told all those lies to.’ And it was love at first sight.”

Not sure what kind of professional life he wanted, Calbert hesitantly entered SFA as a music major. However, one accounting class got him interested in public accounting, and he quickly changed his major.

During his sophomore year, Calbert began a full-time position at Elliott Electric Supply in Nacogdoches, where he worked closely with owner Bill Elliott, who became a mentor. The position would become an early guide for his time in the business world.

“Mike was our credit manager when we had three stores,” Elliott said. “He was professional and insightful beyond his years. We enjoyed talking about the business, and we both wanted to make a difference.”

Learning the language of business

Calbert began at the Houston office of Arthur Andersen in 1985, starting as an auditor and later working on projects that included profit enhancement and strategy operations.

“Accounting is like the language of business, so Arthur Andersen provided great training to learn this language and what financial statements are about. But I always had this pull to understand more about how business operates,” Calbert said.

Later, the firm picked up a San Antonio-based retailer, H-E-B, and Arthur Andersen placed Calbert on the team. He worked with Charles Butt, chairman and CEO of H-E-B, and the grandson of its founder, Florence Thornton Butt. Charles reminded him in a lot of ways of Elliott for both his business savvy and inquisitiveness.

“Everything Charles did in the 1980s was preparing the company to compete against Walmart,” Calbert said, explaining that Walmart wasn’t in the grocery business at the time. “He would think about strategic, important issues — issues he would have to deal with three or five years down the road.”

H-E-B laid the groundwork for Calbert to spend the rest of his career in and around retail, he said. In 1994, a Houston-based partner of Arthur Andersen approached Calbert to assist in helping consult for another family-owned grocery retailer, Randalls. The company had purchased Tom Thumb and was struggling to integrate the two businesses into one.

“I was in my early 30s, and it was a position that was probably several years more advanced than my age, so it was attractive. I loved the family, and I loved this problem that we had to solve, and I thought I could be a part of solving it,” Calbert said.

Ironically, the success of his former account, H-E-B, and that of Walmart complicated the integration of Randalls/Tom Thumb. The family eventually sold 80 percent of the company to the U.S.-based private equity firm Kohlberg Kravis Roberts and Co.

The purchase was Calbert’s professional introduction to KKR, which asked him to move to California and join the firm to run its retail practice in 2000. The firm remains one of the largest in the country and has, during the past 20 years, grown from two offices in the U.S. to 21 offices in 15 countries.

“It’s funny. My youngest son is a planner. He’s in college, and he wants to plan exactly what he’s doing the day after he graduates, but that’s not the way life works,” Calbert said. “You have a lot of lucky and unlucky breaks. You find yourself in the right place at the right time, and you do your best to capitalize on it. I never would have guessed when I was at Arthur Andersen that I would become CFO of Randalls or that I would have gone on to KKR, but it just happened that way. I had several great mentors during my career. I tried to learn everything possible from each one.”

KKR began working to purchase Dollar General in 2006 and reached a deal in the summer of 2007. At the time, Dollar General was a public company, meaning its shares were traded on the New York Stock Exchange. It had approximately 8,500 stores and 74,000 employees, “and the company was broken,” Calbert said.

To Calbert, Dollar General wasn’t just another acquisition — the company’s culture stood out.

“I’m a believer in real missions,” he said. “Dollar General’s mission is to serve the underserved — to offer products at or below Walmart prices in neighborhoods where the single mom on a tight budget can walk down the street and get what she needs. Without us there, it will be much harder on her. That’s a really strong mission.”

Today, Dollar General has approximately 15,000 stores and nearly 140,000 employees, and KKR has managed to grow the company while keeping its culture and mission as strong as before.

When the news of Dollar General’s purchase by KKR broke, Calbert was standing in the foyer of the company’s headquarters speaking to approximately 4,000 employees, laying out the game plan and assuring them they would not lose their jobs. This practice of talking to employees in person was something Calbert said he did for every buyout.

“I believe you have to get the people part of business right, or you’re not going to produce the profits you want,” he explained. “It starts with the CEO, but it goes all the way down to the person working the cash register. They have to know who you are, what you’re going to do and how it’s going to impact them. Particularly in retail, it’s all about people.”

Back at his Lake Austin home, Calbert rose from his chair and walked over to the office bookshelves to explain how the various trinkets lining the shelves represent each transaction he’s ever made.

Calbert retired from KKR in 2014, although he remains chairman of the Dollar General board and serves on three other corporate boards. He admits that, as an undergraduate at SFA working as a cashier for a gas station and studying accounting, he never imagined the life he has made for himself.

“Regardless of where you’re from, if you start with the belief that you can do anything, you’re willing to put in the time and do the work, and you push to be intellectually curious about everything, you can be successful at whatever you do,” he said.

Calbert takes a seat at his large, polished desk. It’s clear that not just the rolling ladder but the whole of his executive office is a symbol of how much Calbert has accomplished in his personal and professional life since graduating from SFA.