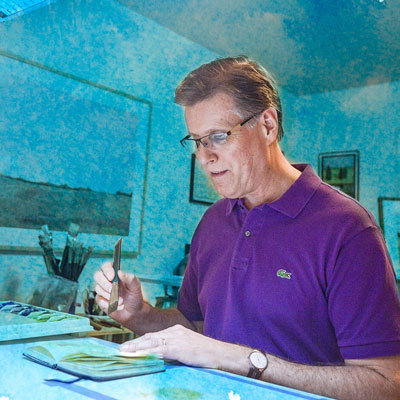 “As far back as I can remember, I’ve been interested in art,” Sekula said. “I always made stuff. During grade school, my interests were drawing, painting and sculpture.”

Today, Sekula draws inspiration from his East Texas surroundings, from fence lines and hay fields to unusual doorways and windows.

“My creativity is inspired from just about anything,” Sekula said. “But architecture and the East Texas surroundings are my main subjects.”

Growing up in San Antonio, supportive teachers at St. Gerard Catholic School and family members encouraged him to pursue his dream of becoming a working artist. After graduating from high school, his interest in art as a profession became apparent.

Sekula attended San Antonio College where he studied advertising design. In the late 1970s, he moved to East Texas to live with his sister and began working at Rusk State Hospital.

Initially, Sekula worked with geriatric and adolescent patients in Rusk State Hospital’s Valley View Unit, teaching them arts and crafts. Eventually, he taught at the hospital’s Skyview Unit, the area within the facility that houses patients with mental illnesses.

“We did painting, clay, all kinds of arts and crafts,” Sekula said. “I would teach five to six patients at a time. The art classes kept them busy and helped break the monotony. It was a type of therapy for them.”

Soon, Sekula enrolled at SFA, working toward a Bachelor of Fine Arts. He recalls his SFA art teachers with fond memories and credits them with giving good and practical advice that still serves him well.

“Some of the art faculty members were and still are my heroes and mentors,” Sekula said. “The late Dr. Diane Ford guided me to become an art teacher, and Piero Fenci, through his love of art and words of encouragement, lifted me to become the artist I am today.”

Fenci, professor of ceramics, still teaches at SFA and remembers Sekula as an accomplished student and artist.

“Arthur stands out as one of the most dedicated and talented students I have mentored in 44 years of running the ceramics area at SFA,” Fenci said. “He has devoted his life to teaching people how to express themselves artistically. He’s so smart, thoughtful and professional in his dedication to exhibiting his art in regional and competitive shows. He’s a teacher who has his hat in the competitive arena, practicing what he preaches.”

After Sekula’s graduation from SFA, he continued to work at Rusk State Hospital, teaching art until 1994. Although he changed his teaching location throughout the years to Jacksonville, Rusk, New Summerfield and now Tyler, teaching sixth- and seventh-grade art at Three Lakes Middle School, he has remained a devoted educator for more than 20 years.

“I think of myself as both artist and educator,” Sekula said. “Looking back, I remember Dr. Ford reviewing my degree plan and saying, ‘Arthur, you’re going to need a job. Consider teaching art.’ At that time, I thought there was no question about being an artist. But now I know what she was trying to say — it might be hard to make a living as an artist. I needed a backup plan, and teaching art has been a way to make a living and enjoy the creative process.”

Although teaching takes up a great deal of his time, Sekula still manages to create artwork of his own, mostly watercolor landscapes and architectural paintings that have earned him accolades in contests and exhibitions. He also paints residential home portraits and has worked in ceramics and sculpture.

“I’ve been invited to regional, national and international exhibits,” Sekula said. “The latest career highlight was being invited to exhibit at the Brownsville Museum of Fine Art, where I won first place in the water media division and the Octavia Arneson Award for best painting. I was invited back the next year and once again took home first place.”

Some of his surreal landscapes were inspired by personal experiences from the past and present, he said.

“My wife (Susan ’83) not only gives me her love and support but also inspires me creatively.”

One such idea from Susan that Sekula is currently working on is painting items in watercolor that involve visual puns.

“I’m currently working on a small watercolor of a pocket watch sitting on a golf tee,” Sekula said. “The painting is titled ‘Tee Time,’ and it is just a fun picture. Although I work a lot in landscapes, I also like to experiment with surrealism and other types of painting styles.”

Before he begins to paint, Sekula said he makes a detailed drawing, often using a grid to ensure the artwork will be produced to scale. He then works to fill in the spaces with paint.

“Painting in watercolor can be extremely difficult,” Sekula said. “Acrylic and oil paints are much thicker and tend to hold their place when applied. However, watercolor tends to control you. It flows wherever it wants.”

Bluebonnets are a favorite subject for Sekula to paint. Pointing to a picture hanging on his studio wall, Sekula detailed how he was contacted by a consulting company about purchasing several prints of the artwork.

“I was skeptical at first,” Sekula said. “The consulting company contacted me on behalf of a client who wanted to use artwork from Texas artists in his hotels. The caller said they saw my artwork and wanted to use it. Specifically, they liked this painting of bluebonnets they saw on my website.”

Sekula said after working for months on the contract, they later made an agreement where 97 prints would be made from the artwork to hang in hotel rooms.

“If you go online to the Courtyard Dallas Addition/Midway website, you’ll see a photo of that painting hanging on one of the room's walls,” Sekula said.

Although he spends much of his time in his own classroom teaching, Sekula said he often thinks back to his time at SFA and the wonderful memories he has of creating art alongside faculty members who left a lasting impression on him.

“Professor Fenci and I have become good friends,” Sekula said. “Not long ago, I told him I would love to own one of his ceramic pieces. Shortly thereafter, he arrived at my house with one of his incredible leaf boxes. That piece is proudly displayed in my studio right next to my drawing table. It gives me inspiration and reminds me of my SFA roots.”