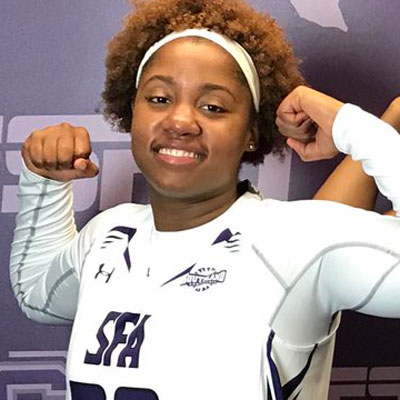 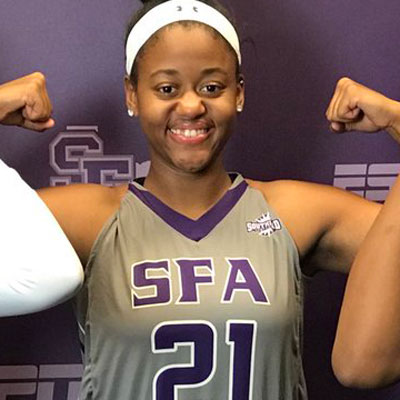 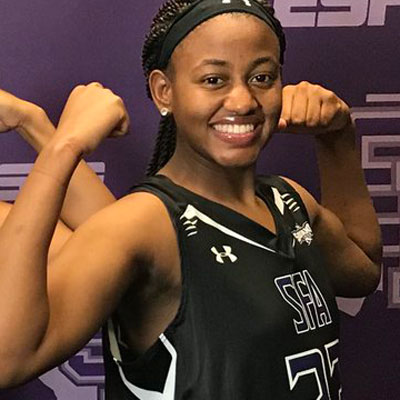 It is not unusual for siblings to excel at the same sport. It also is not uncommon for them to be recruited by the same college or university to participate in an athletic endeavor. What is unique is for three siblings to play the same sport simultaneously at the same university. This rare occurrence is underway at SFA, as the Johnson sisters from Lee’s Summit, Missouri, are all suited up for the 2018-19 Ladyjacks basketball team.

There are only two sets of three sisters playing together in Division I basketball this season. SFA’s Johnson trio is among them. For Aaliyah and Aiyana, the opportunity to play with older sister, Imani, was an opportunity too good to pass up.

“I was fortunate to get to play with both of my sisters during high school,” Aaliyah said. “However, since I was a few years younger than Imani, I just watched her and the team and did what they needed me to do. When I got to play with Aiyana, we were more equals on the court. I made great memories and enjoyed playing with both of them.”

The journey to play basketball began at a young age for the siblings, with Imani starting at age 5 and Aaliyah and Aiyana showing interest during kindergarten. As the years passed and their passion for basketball grew, so did the sisters, with Imani reaching 6 feet tall, Aaliyah 6 feet 2 inches tall and Aiyana, the youngest, 6 feet 3 inches tall.

All three sisters played basketball at Lee’s Summit North High School, a powerhouse program in Missouri. Each sister dominated the court during her time there, with the trio earning recognition on most of the program’s top 10 career statistical leaderboards.

“Aiyana is the most athletic of the trio,” said Mark Kellogg, Ladyjacks head coach. “She’s had the opportunity to watch and learn from her sisters. She definitely looks to them as mentors; however, she has a chance to leave her own mark on our program. Aiyana is extremely skilled, versatile and will be able to play multiple positions for us at some point. The sky is the limit for her.”

After graduation and being named her high school’s leading scorer, Imani played basketball at Southeast Missouri State University. She played two seasons for the Redhawks before looking for a change of scenery.

“I was excited to have the opportunity to come to SFA and play for the Ladyjacks,” Imani said. “It felt like a good fit for me, and I was impressed with Coach Kellogg and the team. It was the type of program I felt I could find my place.”

Imani, a senior forward, is in her second season with the Ladyjacks.

“After I got to SFA and started attending classes and being part of the team, I told my sisters how much I liked it here,” Imani said. “That kind of piqued their interest in possibly coming to SFA, too.”

Noting their own impressive lists of high school basketball accolades, Kellogg and his assistant coaches eventually recruited sophomore center Aaliyah to the squad, followed by forward and center Aiyana, who is in her first season with the Ladyjacks.

“Having all three Johnson sisters in our program is extremely rare at this level,” Kellogg said. “When we signed Imani as a transfer, we knew it was a talented family, but we certainly didn’t know it would end up with all three of them here at SFA. Not only is the situation unique, but they all play a little differently on the court, as well.”

With abundant athletic talent among the siblings, one might expect that the sisters come from a long line of basketball players, but that is not the case. They are the first in their immediate family to play college basketball.

“I started out playing for the Amateur Athletic Union in third grade,” Imani said. “It was really competitive and forced me to get better. My sisters grew up watching me play, and so they kind of understood the intensity that was needed to play at that level. When they made their own way onto competitive teams, they were able to apply that knowledge and grow as players.”

The trio’s commitment to basketball and playing for SFA has spurred some enthusiasm from other members of the Johnson family, including mother Carri, father Amos III and brother Amos IV, who relocated to Houston to be closer to Imani, Aaliyah and Aiyana and be fixtures at the Ladyjack games.

“Our family 100 percent supports us,” Aiyana said. “They’re all in and backing us as we do the best we can for each other and our teammates. I know that me and my sisters will be each other’s biggest fans during the games — yelling at each other from the bench. It will be really special to have my parents and brother there, too, and hear their voices from the stands.”

In addition to the support of their family, the sisters are making lasting friendships and a positive impression on their teammates.

“They have good chemistry,” said freshman guard Brii Mitchell. “Imani can do everything. She’s vocal and uplifting. Aaliyah is positive. She’s always finding the silver lining in every situation. Aiyana is a strong person and has a little bit of both her sisters in her, which is only going to help her grow as a player.”

The Ladyjacks are picked by the Southland Conference Preseason Poll to finish in second place, but whatever happens on the court this season, one thing is clear — it will be a very special time for the Johnson sisters.

“This is the type of experience that stays with you for life,” Imani said. “I know all three of us will think back to this time and remember how special it was. It is something we will talk about over and over again.”