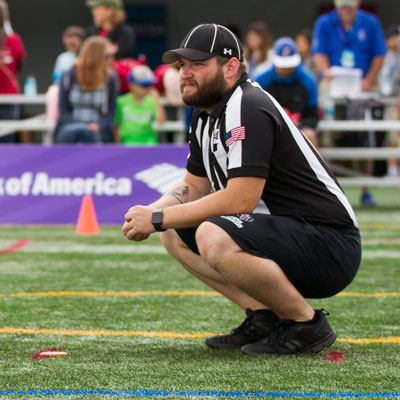 For the Love of the Game

The song “Warriors” streamed from the speakers as singer and musician Allen Stone took the stage. In a sea of excitement, thousands of athletes from across the nation waved streamers, danced and sang as they prepared to compete in the premier national sports competition that showcases the power and joy of sports at the highest level — the 2018 Special Olympics USA Games.

During the opening ceremony, Dustin Sturdivant, an SFA senior kinesiology major, stood on the sidelines of Husky Stadium in Seattle, Washington, and paused to let the reality of the moment sink in. He was one of only four National Intramural-Recreational Sports Association members in the nation selected to serve as a unified flag football official for the games.

In July, more than 4,000 athletes, their coaches, and thousands of fans and volunteers participated in the games, which are held every four years. This year’s event was even more special — it marked the 50th anniversary of the Special Olympics movement.

For the first time in the event’s history NIRSA: Leaders in Collegiate Recreation, an organization that works within higher education to advocate for the advancement of recreation, sports and wellness nationwide, partnered with Special Olympics to give college students an opportunity to serve as game officials. Sturdivant said it was an honor being among the inaugural group for this experience.

“It’s exhilarating because you know you are a part of it,” Sturdivant said. “When you are officiating, it’s not about you. You’re involved in something much bigger. The competition almost seems secondary, as you get to witness the pure joy of the athletes who are participating. It’s special in every way.”

Sports have always played a major role in Sturdivant’s life. Growing up in Lumberton, he played soccer and football and was goalkeeper for his high school soccer team.

“I’ve always loved studying the rules for everything,” he said. “Even as a high school soccer player, my coach asked me and a teammate to learn the rules so if players had questions, we could help.”

Sturdivant initially enrolled at SFA as an education major. However, working for SFA’s Campus Recreation Department during his freshman year was a game changer.

“I fell in love with the family environment,” he said. “I got the opportunity to do something I love and work alongside people who also share my passion for sports. In many ways, it’s not like work at all.”

Sturdivant started at Campus Recreation as a soccer official before advancing to his current job as the competitive sports program assistant. In this role, he serves as an official for various SFA intramural sports, while also helping train officials, schedule and hire employees, and manage the program’s summer camps.

His supervisor, Christopher Morriss, coordinator for intramural sports and camps, describes Sturdivant as a “go-getter” and a person who always helps the staff stay on or ahead of schedule.

“Dustin has grown tremendously while at SFA,” Morriss said. “He has attended community, state and national events and represented SFA so well. He has been an excellent ambassador for the university and our program.”

As a multisport official, Sturdivant travels throughout the region and state working tournaments and games.

“I’m one of the few people who likes getting screamed at by coaches because it keeps me on top of my game,” Sturdivant laughed.

As a NIRSA member, Sturdivant has officiated for many tournaments and received several All-Tournament honors for his work. During his second NIRSA flag football national championship tournament in 2017, he was named a top 10 official and received All-American Honors. It was during that tournament he learned of the opportunity to serve as an official at the Special Olympics.

Officiating the Special Olympics seemed like a once-in-a-lifetime opportunity for Sturdivant. However, since the application was open to thousands nationwide, he thought his chances of being selected were slim.

“When you know there are only four positions available, you understand the odds of being chosen are not in your favor,” Sturdivant said. “I had kind of put it out of my mind. About three months later, I received an email congratulating me. I was shocked.”

During the weeks leading up to the games, Sturdivant and the other selected flag football officials held weekly phone conferences to network. For many of them, this was a new type of event with different rules.

“It was cool to see the partners work with the athletes. The athletes run the show and call the plays,” Sturdivant said. “I enjoyed seeing the sheer excitement on the athletes’ faces; they were so happy to be there.”

Daily from 7 a.m. to 5 p.m., Sturdivant officiated numerous games. “This is the only time I’ve officiated and been the recipient of a high-five after I called a penalty,” he smiled. “It was great. No one got mad. It was probably the biggest crowd and the happiest environment I’ve seen.”

When he wasn’t officiating, Sturdivant was able to act as a spectator. He remembers watching a game in which the underdog scored in the last few minutes to win. Both as an official and fan, Sturdivant said he was impressed with the level of sportsmanship and learned a lot from this experience.

“It broadened my outlook on life. Some people are put in different situations,” Sturdivant said. “The athletes can make the best of their lives and compete at the highest level doing something they love. They are not letting anything hold them back. It was incredible to watch.”