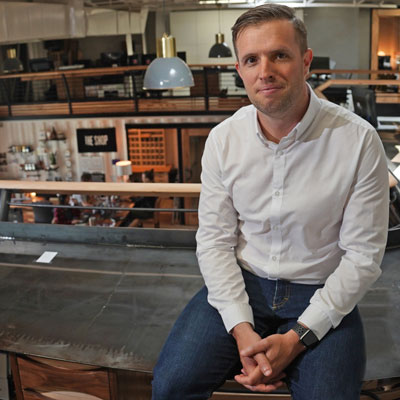 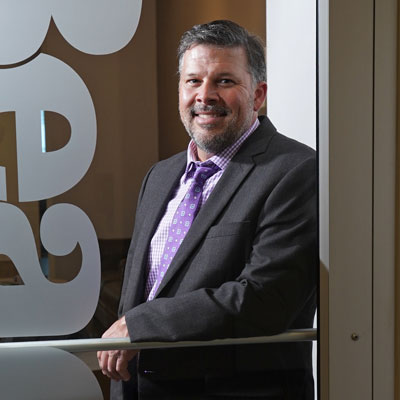 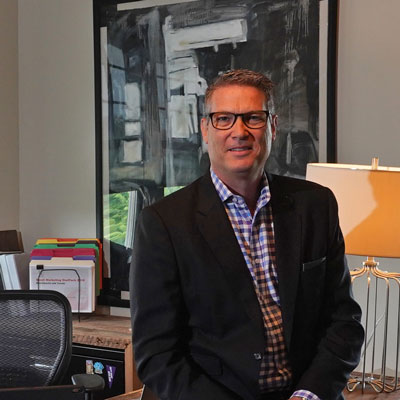 Surrounded by skyscrapers in downtown Dallas, three SFA alumni met for the first time, but they were not strangers.

A chance search in 2017 by Matt Sitser ’04 on LinkedIn had revealed that, in addition to their shared career interests, each member of the trio owned an advertising/marketing agency in the Dallas-Fort Worth metroplex. They also were tied together by their places on the Lumberjack family tree.

With each alumnus’ SFA graduation year separated by nearly a decade, Sitser, Steve Choppin ’94 and Ken Schaefer ’85 broke bread in a downtown restaurant on a sunny May afternoon and bonded over their shared past.

With the opening of The Shop in 2017, Sitser was eager to establish professional connections. He often would go through LinkedIn, a popular business social networking site, and look for people with whom he could network.

“It was then I came across two fellow Lumberjacks who already owned advertising agencies in the metroplex,” Sitser said. “Finally, two years later, we’ve had the opportunity to meet.”

A first-generation college student, Sitser traveled all the way from Liverpool, England, to eventually land at SFA.

“I’ve lived in four countries on three different continents,” Sitser said. “When I was 17, my family moved to Houston, where I attended a massive 5A high school. It was overwhelming. The thought of going to a university with tens of thousands of students was something I did not want to do. SFA was the perfect size.”

As a mass communication major, Sitser worked for the intramural program at SFA. His job was to market the various sports offerings and grow the program. It was during this time he got his introduction to what a career in advertising might entail.

“It was my opportunity to use the concepts I was learning in my advertising classes,” Sitser said. “As a fellow student, I was in a unique position to be the same age as the target audience. I think that helped a lot. The intramural program grew, and professionally, so did I.”

Another introduction at SFA also would become a big part of Sitser’s future — he met his wife, Angela ’04, at the university. The couple resides in East Dallas and has two daughters, Alexandra, 5, and Charlotte, 3.

After graduation, Sitser began work at his first agency job, where he remained until 2008. He then worked for energy provider First Choice Power and later for Dallas-based ad agency Moroch for almost nine years.

Now a principal in his own agency, Sitser said The Shop specializes in creative — the emotional side of advertising. “My partners and I are incredibly fortunate to work with some amazing people and brands, including Tiff’s Treats Cookie Delivery, Garrison Brothers Distillery, Grandy’s Restaurants and Wilsonart.”

Sitser and his partners employ six full-time staff members. He said depending on the needs of their clients, they also work with several specialty contractors to build the team their clients need. This collaboration, he said, enables the agency to fit the people to the project.

“Our mission is simple — to help turn businesses into brands. We do this by creating compelling, consumer-faced marketing materials that tell insightful brand stories,” Sitser said. “Our work is authentic, genuine and covers everything from print and outdoor to TV and online video to digital and social media content.”

Choppin’s segue into the advertising industry came by way of his father, who owned his own agency.

“My father was my biggest career influence. He grew up in the ad business and worked for iconic Bloom Advertising in Dallas and later on the client side at Continental Airlines,” Choppin said. “Then, in the mid-’80s with five kids to feed, he started his own agency. You can say advertising and not being afraid to bet on myself is in my blood.”

While an SFA student, Choppin interned for Nacogdoches’ Hancock Advertising. “Chris Hancock was a real mentor to me,” Choppin said. “He encouraged me to pursue my dreams, even when I had the wild idea of moving to New York City after graduation.”

In 1994, Choppin and his wife, Jane ’94, whom he met in an advertising class at SFA, moved to the Big Apple where he worked as an assistant account executive for Y&R, a marketing and communications company. He later worked for The Richards Group in Dallas before deciding to branch out on his own.

Choppin and his partner launched Beacon Advertising in April 2015. The agency employs 24 professionals.

“We’re a full-service branding agency that works with retail, consumer packaged goods, restaurants and business-to-business clients,” Choppin said. “Our brand mantra is simple, ‘Nothing artificial.’ This means our focus is to always develop brands and messaging that are genuine, straightforward and believable — and, internally it drives our belief of never letting process or politics get in the way of solving our clients’ problems.”

As an owner, Choppin is hands-on. “Through our leadership group’s day-to-day involvement, it allows us to cut out unneeded filtering and meet the really aggressive go-to-market deadlines our retail and restaurant clients have come to count on from our agency.”

With 25-plus years’ experience in advertising, Choppin offered two pieces of advice to current SFA students pursuing a career in the industry.

“First, have two good internships and be able to describe how those experiences will help your success in our industry. Second, during an interview, ask the interviewers multiple questions that are relevant to their position within the company. It’s sad how many applicants get to me during the interview process and say, ‘Nope, I don’t have any questions.’ Their résumé immediately goes in the trash. They are demonstrating they are not perceptive or self-aware and lack curiosity.”

Schaefer grew up in Houston but now resides in the “incredible city of Fort Worth.” His introduction to SFA came through his older brother, David ’74, who now serves as the pharmacy director for Nacogdoches Memorial Hospital.

Schaefer traces his entrepreneurial roots to his childhood newspaper-recycling venture. “I collected the neighbors’ used newspapers, then went home and rolled them into tight logs that could burn forever in the fireplace,” Schaefer said. “I then turned around and sold them back to the people who had just given them to me.”

As a marketing major at SFA, Schaefer ran a small business, Cakes Plus, out of his dorm. “I promise, I’ve gotten better at branding since then,” Schaefer laughed. “I would deliver birthday cakes and balloon bouquets to students on campus. The cakes were home-baked by two sweet women who lived nearby. My target audience was the parents of freshmen. I sold that business during my junior year, and a partner and I opened a deli and gelato place at the corner of North and East Hospital streets during my senior year.”

After graduation, Schaefer headed back to Houston, where he initially worked for Proctor & Gamble and later for the ad agency Taylor Brown & Barnhill. He was recruited away by Ogilvy & Maher and remained with that agency until 1991, when he moved to Fort Worth to become the director of marketing for Justin Boot Company, one of the largest boot retailers in the world.

“That’s when I fell in love with Fort Worth,” Schaefer said. “It’s an amazing city, and you’d never know it’s the 15th largest city in the country. It still feels more like a community. I’m partial to Fort Worth; it’s still a handshake town.”

Since 1994, Schaefer has owned his own business. Located in a restored 1914 home in the Fairmont Historic District in downtown Fort Worth, Schaefer Advertising Co. employs 30 team members.

“During the past 24 months, we have increased our staff by 66%,” Schaefer said. “We have really smart people at Schaefer, but just as important, we have really good people. Our culture is our secret sauce, and we fiercely protect it and work hard to foster an environment built on trust and respect for each other.”

That recipe is working. In 2018, Fort Worth Inc. Magazine named the agency among the Top 25 Best Companies to Work For in the city. The agency focuses mainly on serving clients in real estate development, health care, and destination and entertainment.

“My passion has always been marketing strategy,” Schaefer said. “We exist to solve our clients’ business problems, and we use marketing to help do that. We relentlessly focus on strategy. There’s an old saying, ‘Advertising without strategy is artwork.’ We are not in the artwork business.”

The aspect Schaefer said he enjoys most about his job is collaborating with people who possess different abilities and talents, including creativity and problem-solving.

“Our industry is always changing,” Schaefer said. “It’s never boring, and if you think it is, you’re doing it wrong. I believe brilliantly crafted and thought-through strategy is every bit as creative as a poignant TV commercial or a photo shoot that perfectly captures the message.”

Although imagination and logic are qualities Schaefer values in his employees, he says the ability to think critically is paramount.

“Nothing we do is cookie-cutter,” he said. “There’s not a textbook that will teach you the ‘Six Steps to an Effective Digital Campaign.’ It doesn’t matter if you’re on the creative or digital team, the ability to think critically and develop crisp, concise and effective solutions is crucial. Schools need to focus more on that. Nothing will serve a graduate better — except a trust fund, and most of us don’t have one of those.”

With more than seven decades of advertising and marketing experience among them, the entrepreneurs said they are tossing around the idea of collaborating on a project.

“During our lunch meeting, we shared stories about our experiences at SFA and in business,” Sitser said. “As the youngest in the group, Steve and Ken’s insight was invaluable. It’s one thing to connect with professionals through LinkedIn, but it’s quite another when they are fellow Lumberjacks and that initial connection develops into friendship. I know we’ll stay in touch and hopefully team up on a project soon.”