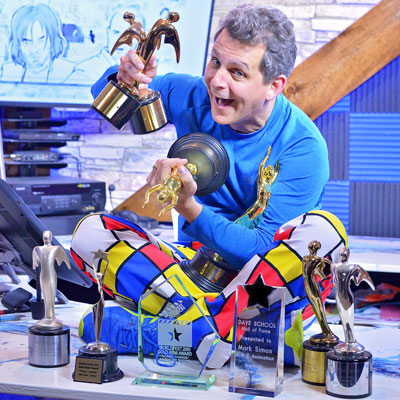 Bringing the Dead to Life

Pick a random career out of a hat, and there is a good chance Mark Simon ’86 has worked it.

At 12 years old, Simon designed skateboards for Schwinn Bicycles. By 14, he was a crew supervisor for his father’s Houston-based custom home building company. The flyers and signs Simon created there sparked attention from other businesses, so in high school, he formed his own company, Nomis Creations (“It’s just Simon spelled backward. Highly creative, right?” he laughed) and started designing for other Houston businesses.

He’s a go-getter and, more than that, really doesn’t like the word no.

“I’ve always started at the top,” Simon said, standing in his Atlanta basement surrounded by shelves of books he’s written and posters of TV show storyboards he’s designed. “For the most part, it’s worked out well because I always go to the person who can say yes instead of the five people before him who could say no.”

Trying to tell Simon’s story is like attempting to catch the Tasmanian Devil midwhirl and force him to give up his secrets. He’s a machine, the Energizer bunny, or like a commercial where the car whips full-speed through the mountains, which is actually a type of commercial he’s designed.

Living life full-tilt has worked out well for Simon. It got him a job working for Nickelodeon in the network’s earliest years and for acclaimed director Steven Spielberg in the 1990s. Most recently, Simon worked as lead storyboard artist for AMC’s “The Walking Dead” television series.

But we’ll start his story toward the beginning — as a high school senior drawn to SFA by a faculty member whose influence never left him.

Art ties all of Simon’s professional pursuits together.

“It’s always been art, design and wanting to tell stories,” Simon said. “I was doing cartoons in high school, and I sold a few editorials. When I got to SFA, I wanted to do strips and editorials, so my first semester, I became The Pine Log’s cartoonist.”

Simon didn’t just want to be an artist. He also wanted to know how to market his own work and understand the business side of selling his creations.

“My best friend was going to SFA. I also ended up going to an SFA theatre camp the summer after my junior year and getting a theatre scholarship,” he said. “When I toured the school and saw what [William] Arscott was doing, I was blown away.”

Arscott, a professor of art and SFA’s longest-tenured faculty member, came to SFA in fall 1963 and developed the cinematography program.

“Arscott had a computer-controlled animation stand, but no one knew how to use it for animation,” Simon added. “No one knew animation, so I’m self-taught. When I first met him, he was building a crane that he mounted in his pickup truck. I knew I wanted to be around a guy who was innovative, creative and working with students, so I joined the program.”

It’s obvious that when Simon decides to do something, he’s all in. In fact, being all in is more of a starting point for him.

For example, when The Pine Log didn’t publish some of his editorial cartoons concerning race relations in East Texas, he didn’t just quit the paper. He started his own competing newspaper; aptly named it the Belligerent Beacon; stole about half of The Pine Log’s advertisers, he claims; and expanded the paper to three other Texas universities.

Simon double majored in art and general business and graduated from SFA with a Bachelor of Fine Arts. To this day, he says Arscott continues to have the most lasting effect on him as an artist.

“Mark was a great student,” Arscott said. “He was an achiever, and I’m not surprised he is very successful.”

“I took a test in film animation and failed because I’m self-taught,” Simon explained. “The artwork was fine, but I didn’t understand the industry standards … so I figured with my construction and design experience, I could design and build sets.”

One of L.A.’s largest set building companies hired Simon. Then, about four months later, he learned a movie at Roger Corman’s studio needed a construction coordinator. Corman is an American director widely known as the “King of B-Movies.”

“I got the job and, two weeks later, I became the art director,” he said. “The production designer didn’t know how to run a crew, so he drew pretty pictures, and I did everything else. One day, he said, ‘Well, you’re really acting as art director,’ so they gave me that credit, and that launched my career.”

Simon became a construction coordinator and storyboard artist for “1st & Ten: The Championship,” an HBO sitcom. The show was one of Simon’s introductions to storyboarding, and he realized the trade was the perfect intersection between the things he loved most — drawing in black and white (he’s partially colorblind) and telling stories.

He brought his portfolio to Storyboards Inc., an industry leader in advertising and film visuals, only to be told he wasn’t ready, given notes and sent away. But Simon kept returning to receive more notes until the company said he was ready and asked him to storyboard a Honda commercial.

“If an opportunity shows up, I jump on it,” Simon said. “I have no problem speaking my mind or telling someone, ‘I think I should be doing that.’”

While working at HBO, Simon met his wife, Jeanne, who was the art department coordinator for the network. After the deadly 1989 San Francisco earthquake, the Simons left for Orlando, one of the new boomtowns for TV and film.

“I started doing commercials, and my wife got a job as a production manager at Nickelodeon before it opened,” Simon said. “In her interview, she mentioned my background, and they said they were in desperate need of art directors. I interviewed the next day, started the week after her and was the second designer at Nickelodeon when they opened the new studios in 1990.”

As if Simon’s life wasn’t already a string of relentless successes, he got wind of a rumor that a Steven Spielberg show was coming to town, had one person introduce him to the next until, in about 15 minutes, he was hired. He storyboarded 21 episodes of the Spielberg show “seaQuest 2032.”

Tallying up his work in film, commercials and TV, Simon is nearing 5,000 productions. His most recent project also is one of his most exciting — in the midst of moving to the Atlanta area last year, Simon landed a deal storyboarding the ninth season of AMC’s “The Walking Dead.”

Upon opening the basement door of the Simons’ suburban Atlanta home, a life-size cardboard cutout of Negan, one of the villians in “The Walking Dead,” greets you. As you turn and begin to descend, you find a narrow ledge running the length of the staircase is home to dozens of trinkets representing shows Simon played a part in creating.

At the bottom, it’s hard to know where to look first. Most eyes might drift left, where a sliding door backlit by a projector appears to show zombies struggling to claw their way out of a room. In one corner to the right is another life-size cardboard cutout, this one of beloved character Daryl Dixon of “The Walking Dead.” Past it, the room opens to a desk covered in monitors and storyboarding gadgets.

Having circled the basement, perused the bookshelves and studied the comic strips hanging from the walls, one might think the tour is over until Simon pushes a section of the faux-brick wall to reveal a secret door.

Simon and his wife were in the process of moving to their home in Atlanta when he reached out to a friend and one of two directors of photography for “The Walking Dead.”

“I’m a huge fan of the show,” he said. “Spielberg was my first dream job, and this is my second.”

Simon’s responsibilities on the live-action show are to storyboard stunts and special effects. Given that there’s typically a different director on every episode, his storyboards help pictorialize the director’s vision for the cast and crew to reference during filming.

“If you and I read a script, we’re seeing totally different things in our head,” Simon explained. “Only the director’s vision matters. So I have to get into the director’s head, figure out what he or she wants the shots to look like and draw them … so the 200 to 500 people on the crew work toward one vision.”

“I was packing up my house in Orlando, so I storyboarded the first episode with executive director Greg Nicotero long distance,” Simon said. “His assistant told me that Greg hates working with story artists. They never get what he wants. But after we collaborated, Greg went to the executives and said, ‘Hire this guy on this whole season. This is the only storyboard artist I want to work with.’”

Simon literally wrote the book on storyboarding. He has published 10 instructional textbooks, but his best-sellers are a series of facial expression books he compiled as visual references for artists. In his spare time (not that he has much), Simon lectures at conferences and universities and produces instructional videos for aspiring artists.