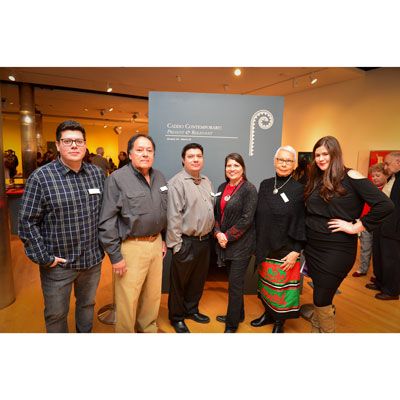 Unique works by Caddo artists exhibited at SFA earlier this year still have historians and members of the art world talking. The exhibition was considered significant for several reasons.

It was the first to exclusively highlight the work of living Caddo artists, and it was the first time for contemporary Caddo art to be displayed in Nacogdoches, the home of the Caddo Nation for thousands of years before leaving its East Texas home and eventually being forced to relocate to Indian Territory in Oklahoma.

“Caddo Contemporary: Present and Relevant,” which featured ceramics, paintings, beadwork, stonework and drawings, was a collaborative presentation of the SFA School of Art and Art Galleries and the Caddo Mounds State Historic Site in Alto.

This presentation of Caddo contemporary art in the artists’ native homeland brought with it “tremendous meaning,” according to John Handley, director of art galleries at SFA.

“It was an attempt to address and heal from past wrongs done to the Caddo people and to highlight the beauty of their work,” Handley said. “Some work was directly based on ancient traditions, and other work spun off into new contemporary art forms. This exhibition showed that the Caddo people are alive and well — that they contribute to the continuation of their own history. It was a celebration in every way possible of their very existence as American artists, who also just happen to be Native Americans.”

The Caddo Nation, previously known as the Caddo Nation of Oklahoma, comprises descendants of Caddo tribes. Their ancestors, who historically inhabited much of what is now East Texas, Louisiana, and portions of Southern Arkansas and Oklahoma, were known for building huge earthwork mounds at sites in the territory.

In the early 19th century, the Caddo people left their East Texas home because of overcrowding by other tribes and Anglos. They relocated to a reservation along the Brazos River area in Texas; then the government moved them to Indian Territory in Oklahoma in 1859 as European-American settlement migration moved west. They refer to this time as their time of homelessness. Today, the federally recognized Caddo Nation’s capital is in Binger, Oklahoma.

The idea behind this exhibition started several years ago after local art patrons began asking Handley if there were any plans for a Native American exhibition. He approached Rachel Galan, the educator/interpreter at the nearby CMSHS, about the possibility of an exhibition of Caddo art.

CMSHS is a prehistoric village and ceremonial center located on the original El Camino Real de los Tejas, along State Highway 21 west of Nacogdoches. According to information on the Texas Historical Association’s website, visitors can walk a self-guided interpretive trail that features a grass house, an interpretive garden, Snake Woman’s Garden, three earthen mounds and a borrow pit.

One of the more significant aspects of the CMSHS is that it is actual ancestral Caddo land. In recent years, the Caddo have partnered with CMSHS to help build a traditional Caddo house, give lectures and demonstrations on a variety of topics ranging from traditional stories to teaching about the Caddo in K-12 classrooms, and participating in festivals and other celebrations.

According to Galan, the CMSHS staff members often grapple with the challenges of attracting visitors to and engaging them in interaction with a historically significant space “that is no longer home to the people who made it so,” she said. Staff members attempt to meet that challenge through “collaboration, conversations and interpretation,” she said.

“Added to this challenge is preserving the historic landscape and archaeological resources of CMSHS, documenting and sharing the intangible cultural heritage of the Caddo, and engaging the Caddo people to help tell their story and honor their contributions to contemporary society,” Galan said. “This art exhibition is a wonderful example of this work, thanks in part to John and his willingness to embrace the importance of engaging Caddo artists in the development of this show.”

During his conversation with Galan, Handley said he started with the typical questions: What would an exhibition on the history of the Caddo Nation look like? What would be included?

“Rachel quickly pointed out to me that there was already a lot of scholarship on Caddo history, but little about the current Caddo Nation — especially living artists,” Handley said. “This conversation continued for some months until I put some dates on the calendar, and we were off and planning.”

Galan and staff members at CMSHS have made important connections in recent years in establishing relationships with Caddo people now living in Oklahoma.

“Building on these relationships, we contacted several artists and asked if we could visit them with an exhibition proposal we had in mind,” Handley said. “Once in Oklahoma, we met with artists Chase Earles, Yonavea Hawkins and Jeri Redcorn about the exhibition, which was warmly received.”

During the meeting, the artists asked who would select the pieces to be included in the exhibition. Handley told them each participating artist would select the work he or she wanted to show.

“That answer was exactly what they wanted to hear,” Handley said.

Additionally, the three artists were asked to compile a list of other working artists who, in their opinion, also took pride in representing the Caddo Nation. Based on that list, Chad Earles, Wayne Earles, Raven Halfmoon and Thompson Williams were later added to the exhibiting group.

Handley said he invited the artists to essentially curate their own show because he had slowly come to realize that there had always been a history of people who were eager to talk about the Caddo as if they were not in the room.

“Maybe no one had asked them to tell us about themselves directly through their art and presence,” he said. “This became paramount for the vision of the show.”

Chase described the exhibition as the epitome of his mission as a Caddo native artist.

“And that’s to educate and inform the public of the unique, beautiful and often overlooked cultural identity of the Caddo people who are native to the Southeastern region,” he said. “As it is one of the only exhibitions and public showings of contemporary Caddo artists, I definitely feel like it shows progress, not only in understanding of Southeastern Native American art, but also in acknowledgment of the native tribes’ specific cultural identities, such as the Caddo, who are originally from these lands.”

Chase said he hopes exhibitions like Caddo Contemporary will bring about an awareness to the public “and our own people” about Caddo prehistoric and historic art and culture.

“And that it shows our young Caddo members that we are trying to carve out a space for them to advance, to thrive in the arts and to have a voice for our tribe,” he added.

In addition to the artwork on display, the collaboration featured storytelling sessions by Kricket Rhoads-Connywerdy, a member of the Caddo and Kiowa tribes of Oklahoma, who has been telling Kiowa and Caddo stories in Oklahoma, across the United States and internationally for more than two decades.

Also, the PBS film “Koo-Hoot Kiwat: The Caddo Grass House” was screened at Cole Art Center as part of the School of Art and Friends of the Visual Arts’ Friday Film Series.

As a result of the SFA exhibition and other projects at Caddo Mounds, Chase will be welcomed to CMSHS in April as its inaugural resident artist, Galan said.

“This event will mark the first time in 800 years a Caddo person will live in his East Texas ancestral home,” she said, referring to the Caddo Mound site. “In addition to creating works inspired by the site, Chase will be integral in helping to tell the stories of the place and share in the work of developing educational and interpretive materials and programs. He will mentor interns, engage with visitors and help us build a sustainable program to provide other Caddo residency opportunities.”

CMSHS will host a Caddo Culture Day April 13, and Hawkins will teach a beadwork class April 14.

The exhibition was sponsored in part by William Arscott, The Flower Shop, Nacogdoches Junior Forum, Humanities Texas and Friends of the Visual Arts.