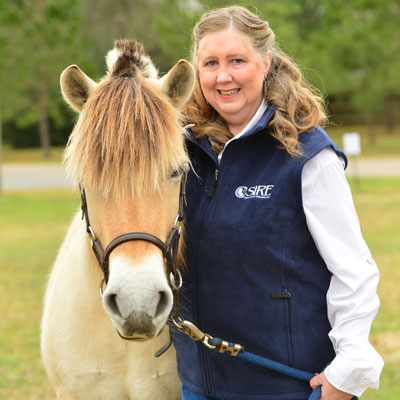 Gripping the lead rope, K Leonard ’80 steadies Gertie, a sandy-colored pony that loves apples and flaunts a multicolored mane, as 20-year-old Lauren Igler settles into the saddle to begin her lesson.

Since 2016, Leonard has served as a board member for Sire Therapeutic Horsemanship, a nonprofit organization that provides horse therapy for adults and children with special needs.

“Being able to play a role in educating people about our results and helping provide the funds to build facilities and offer riders scholarships is something I’m very passionate about,” Leonard said. “It gives me joy to give back in a very meaningful way.”

With three locations in the greater Houston area, Sire is one of the largest organizations of its kind, serving almost 300 riders a week ranging in age from 3 to 83, who have been diagnosed with a variety conditions, including cerebral palsy, autism and Down syndrome.

“Each rider is treated as an individual. When the riders come into the program, our instructors and site managers discuss their diagnosis. They complete an evaluation to better understand their goals and what they want to work on to improve the quality of their lives,” Leonard said.

Situated in the middle of a subdivision, Sire’s location in Spring is a 37-acre property with an arena and sensory course for therapy. Other locations include a site in Hockley and a program based at the Richmond State Supported Living Center in Richmond. Sire is recognized by the Professional Association of Therapeutic Horsemanship International as a Premier Accredited Center, and all of its instructors are PATH certified.

“Sire started with horse lovers who knew the healing power of these animals” said Joe Wappelhorst, Sire executive director. “Our mission is to help people with special needs meet their life goals through partnership with horses.”

Sire’s history spans three decades, and Leonard has been with the organization since its beginning when founder Cindy Lindh boarded her horses in Nacogdoches.

“I was a college student and didn’t have my horses in Nacogdoches, so instead of being homesick, I was horse sick. I had the opportunity to work with Cindy doing arena work. She was just getting the program started,” Leonard said.

While Leonard grew up near the Galleria in Houston, she’s a self-proclaimed country girl. “I have loved horses for as long as I can remember,” she said. “When I was in elementary school, my dad purchased a small farm, and I got my first pony, Blaze, and it sort of mushroomed from there.”

Throughout junior high and high school, Leonard showed Appaloosas and competed in equestrian events. She continued to compete at the world and national levels throughout her adult life, earning multiple year-end high-point awards in dressage, halter, and various Western and English performance events. Her love of all things country sparked her interest in attending SFA. In fact, she remembers driving by the university on her way to her grandparents’ house and being drawn to the landscape.

Leonard entered college with the goal of becoming a writer for a horse magazine and decided to major in agriculture and minor in journalism. She said she discovered more opportunities in journalism and flipped her major. Leonard served as a sports writer for The Pine Log, covering the women’s track team. She also worked as the Friday edition editor when the paper was produced twice a week. During her time at SFA and on The Pine Log staff, Leonard interviewed and wrote articles about ABC news reporter Sam Donaldson, comedian Bob Hope and Olympic athlete Wilma Rudolph.

Dr. Francine Hoffman, former SFA journalism professor, had a major influence on Leonard’s life. “She called me into her office one day and said there was an internship opportunity at Conoco in the public relations department,” Leonard said. “With that introduction from Dr. Hoffman, Conoco sent me an application. I spent a summer there and was hooked on working in the energy industry and corporate communications.”

Leonard’s internship with Conoco blossomed into a 36-year career in corporate communications within the energy sector. “It was an introduction into corporate America that never really entered my mind before,” Leonard said. “I had the opportunity to work on projects all over the world, and I tie these opportunities back to the mentor relationship I had with Dr. Hoffman.”

After graduating from SFA, Leonard began working for Union Texas Petroleum in Houston as the editor of the company’s employee publication. She later transitioned to a position with Columbia Gulf Transmission, a natural gas pipeline company, where she worked for more than 20 years managing all aspects of corporate communications, internal and external relations, charitable programs and service projects.

She later opened her own communications firm before working for Anadarko Petroleum and then as director of communications at Calpine, an electric power producer. Leonard finished her career as the public relations manager for Enron Oil and Gas Resources, one of the biggest independent oil and gas companies in the U.S.

As she began thinking about retirement, Leonard brainstormed ways to marry her corporate communications experience with her passion for horses.

“I fondly recalled volunteering with Sire in 1980 when it was still in Nacogdoches, and I stayed involved with the organization during the years. I thought the organization was one where I could give back,” she said. “I talked with administrators and told them if there is an opening on the board to please keep me in mind.” It wasn’t long before Sire connected with Leonard.

When talking with Leonard, it’s easy to see she is passionate about Sire. “K has used her influence in the community to shine a light on Sire. She’s not shy about talking to anybody about it,” Wappelhorst said. “It’s been fabulous to have her in that role. She knows the program, knows what we need and is able to communicate that to the public. She has had a huge impact.”

Since becoming a board member, Leonard has helped garner more recognition for the organization and has chaired Saddle Up for Sire, an event that combines online fundraising with a trail ride to connect the equestrian community with Sire and its riders.

“This organization is so important to me because you really see the changes that it makes in people’s lives,” Leonard said. “The neat thing is the value of the horse partner. The tactile sensations of touching their soft, warm coats and feeling the motion when riding are incomparable from a therapeutic standpoint. It’s something that simply can’t be duplicated in a traditional clinical setting.”

Leonard shared stories of Sire riders whose lives have been changed since entering the program, including people who were once nonverbal now speaking their first words. Others have regained their ability to walk following strokes or other debilitating illnesses. “When you can give someone the gift of communication, mobility, socialization and self-esteem, it’s truly amazing,” she said.

While Leonard’s board responsibilities keep her on the road and phone most of the time, she said she tries to visit the sites as often as she can.

“Sire matches an important need in our community,” she said. “When I see the smiles on the faces of our riders, that’s better than any paycheck I could ever earn.”