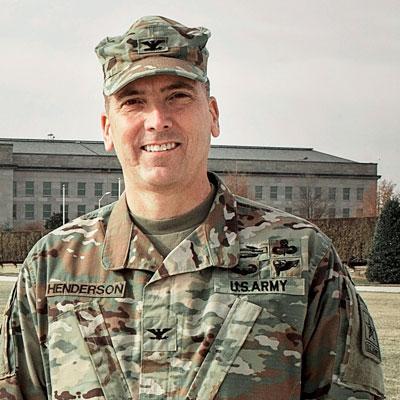 A 17.5-mile maze of hallways and offices replace the rugged battlefield terrain Col. Clarence Henderson ’89 & ’91 has grown accustomed to during his 28 years of military service.

Dressed in battle fatigues, Henderson navigates the Pentagon in Arlington, Virginia, as a staff member assisting with the military budget for the Department of the Army Military Operations — Strategic Plans and Policy for War Plans. While his mission is now different, his goal remains the same — to defend the U.S. Constitution.

“I joined the Army because I needed money and expected adventure,” Henderson said. “Upon accepting my commission, I realized my oath was to the U.S. Constitution. It’s important to understand the Constitution. We serve the people of the United States, and we answer to the civil authority of our elected leaders.”

Working near the nation’s capital and at the Department of Defense headquarters gives Henderson a different view of the military. “I like seeing the executive side,” he said. “I think it’s important to be effective in whatever you’re doing. If I’m not learning then it’s time to leave. I wanted to come here, learn new things and grow.”

The son of a Korean War veteran, Henderson never planned on joining the military. Instead, his interests in agriculture and track led him to SFA.

“I’ll never forget my first day in class at SFA with Dr. Joseph Devine (professor emeritus of history). He lectured on the importance of history and its reflection on our lives,” Henderson said. “Though I studied agriculture, from that passionate speech, I became a student of history for the rest of my life. The ability to reflect, meditate and pray about events we have experienced and studied is extremely important.”

While an undergraduate, Henderson lived on the 13th floor of Garner Apartments, and he and his roommate often survived on day-old doughnuts purchased from Shipley’s.

“We had the best view of campus. Everyone would come up to our room and listen to records,” he said. “I still recall my roommate yelling out the window at me trying to see how far his voice would travel. I think our record was to Taco Bell on North Street.”

“I spent hours running with my teammates on every Nacogdoches back road. Everyone needs to belong to something, and for me, it was the track and cross-country teams,” he said.

After graduating with his bachelor’s degree, Henderson planned to stay in Nacogdoches and pursue a master’s degree in soil science. However, during the summer he attended basic training to earn some extra cash. Little did he know this summer job would change his life.

Upon his return to SFA to attend graduate school, Henderson also became an ROTC cadet. He was commissioned as a second lieutenant the day he received his master’s degree. His goal was to serve in the National Guard, but as the only SFA cadet offered active duty, his plans changed. “I loaded up my truck and drove to Fort Campbell, Kentucky,” he said.

Henderson began his military career as a medical officer with the 101st Airborne Division. He later attended Airborne, Air Assault, Pathfinder, Jump Master and Ranger schools. At Air Assault School, he won the coveted 12-mile Road March Champion title while carrying a 30-pound rucksack. After attending Ranger School, he left the Medical Service Corps and transferred to the infantry, where he has served ever since.

According to Henderson, Ranger School is among the toughest schools, and it tests soldiers on their leadership abilities and knowledge of small-unit tactics. Henderson trained in the Georgia forests and Florida swamps, where he lived on two hours of sleep and one military field ration a day.

In 1999 and 2000, Henderson and his partner finished among the top 10 teams in the Best Ranger Competition, a grueling 60-hour event many soldiers don’t complete. “We were each presented with a custom bayonet. I carried mine into combat in Afghanistan and Iraq,” he said.

On the front line

Walking through the Pentagon’s E-wing, Henderson pauses where American Airlines Flight 77 crashed Sept. 11, 2001. An aerial view of the Pentagon’s collapsed wall is on display in front of him, complete with photographs of those who helped save others inside. To the right, wooden plaques engraved with 184 nameplates serve as a visual reminder of those who lost their lives in the terrorist attack.

Henderson was working for the 36th Infantry Division of the Texas Army National Guard when he saw the twin towers collapse on TV. “That day, I drove to headquarters in Austin and told them to put me in the fight,” he said.

After volunteering, he was sent to Fort Hood for overseas processing and departed to Afghanistan to serve with the 2nd Brigade, 10th Mountain Division. His commanding officer was Col. Mark A. Milley, now a four-star general whom President Donald Trump selected in December to serve as the next chairman of the Joint Chiefs of Staff.

Serving in a hostile area in Afghanistan along the Pakistan border, Henderson’s goal was securing it and helping establish the Afghan National Army. He received a Combat Infantry Badge and Bronze Star for actively engaging and destroying an enemy force in ground combat.

Col. Scott MacLeod, who now serves as Texas Military Department Liaison to Army Futures Command, which is aimed at modernizing the Army, was Henderson’s commanding officer on a subsequent deployment in Iraq and has worked with him in various capacities for a decade.

“Clarence is a truly exceptional infantry officer whose experience and competencies place him in the top 1 percent of officers with whom I’ve served,” MacLeod said. “His professional attributes and skills have been honed through decades of service to our nation. He is the type of leader who inspires confidence in his soldiers and is always entrusted with tough, tier-one assignments, often in dangerous places.”

Henderson has been deployed around the world in various units and roles, and his service includes commanding thousands of soldiers at the platoon, company, battalion and brigade levels.

“The hardest thing I’ve ever done is lead soldiers. I have been entrusted with the treasure of our country, which is the sons and daughters of parents who trust the Army will take care of them,” Henderson said. “They volunteered to be a part of the profession of arms, and I must make sure they are properly trained for any situation they might encounter.”

What started out as a way to make money and discover adventure has developed into a lifelong calling for Henderson. Whether he remains at the Pentagon or receives orders to once again lead troops into battle, he will be ready.

“Military service comes in many forms,” Henderson said. “It may be supporting an effort by driving a truck, processing administrative orders in a combat zone or directly engaging the enemy. Wherever Army commanders determine I can do the most good and decide to send me, I’ll be ready. My focus is on service and its transcending effect.”