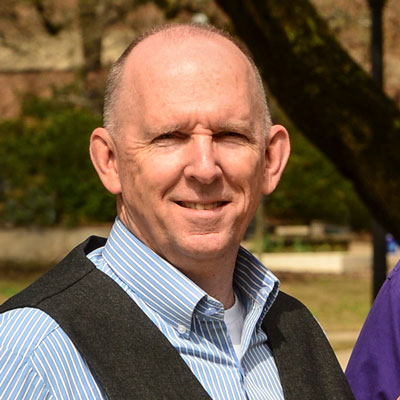 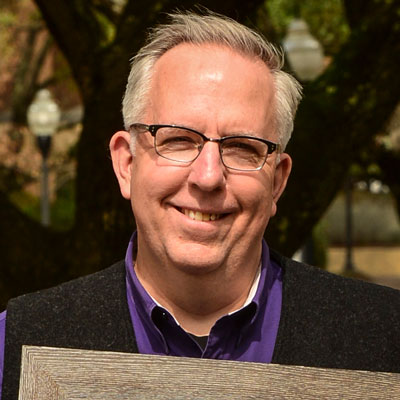 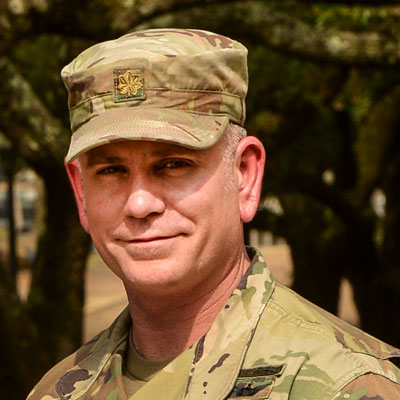 In 1968, U.S. Army Lt. Col. James “Jim” Calahan came to SFA to serve as professor of military science and launch the school’s ROTC program. Fifty years later, U.S. Army Maj. James Attaway, who was a member of the program from 2001 to 2004, has come back to campus to lead it. The half-a-century timespan has helped produce many top military leaders, including three generals. It also has served as an anchor point for cadets, past and present, to connect with their brothers and sisters in arms.

Dr. Ralph Steen, who served as SFA’s president from 1958 to 1976, wanted to start a collegiate officer training program. He believed that publicly funded colleges had an obligation to produce graduates capable of filling military leadership roles, and the types of courses designed for this purpose would attract a higher percentage of quality students.

Steen applied to the government to start the program, and Jim, a combat arms officer in the Regular Army, who led troops in combat in Korea and Vietnam, was assigned to establish it. Less than enthused about this new mission, Jim said, “I do not like college students. I have a low regard for ROTC programs, and East Texas appears rather akin to a third-world country.” But, Steen was unfazed.

According to Jim, Steen said, “Colonel, it won’t work. I’ve read your file, and you’re the one I want.” Jim arrived on campus in February 1968, bringing his wife, Martha, and two sons, Phil, 7, and John, 16 months, with him.

“Initially, dad had much to manage on the administration side of launching an ROTC program during wartime,” said John Calahan, a retired U.S. Army lieutenant colonel who now serves as the director of institutional effectiveness at SFA. “Dad delivered recruiting talks to fraternities and student clubs and accompanied admissions staffers to college day events across Texas to recruit cadets. He also began to prepare the curriculum and lay out areas in which to train on campus.”

By June 1968, the program enrolled 35 sophomores, who were all sent to Fort Benning, Georgia, for six weeks of intensive training. Upon returning, those who made the cut worked toward becoming commissioned officers.

“Lt. Col. Calahan was my military science professor when I joined the SFA ROTC in 1970,” said David C. Treadaway. “It was a love/hate relationship. Looking back, I wished my son would have had a mentor in his life such as I had in the lieutenant colonel. No one had a greater impact on me during my college years than him. He was a friend and a role model for all of us in the program.”

Although Jim passed away in 2005, his legacy lives on not only in his sons, but also in the program itself.

“Dad became a father figure to many of the cadets,” said Phil Calahan ’82, a retired U.S. Army colonel. “Every few years, up until he passed away, about 20 or 30 ROTC graduates would show up at our house at random times or all together. Dad enjoyed those cadets and liked being around them, and the feeling was mutual. When he passed away, guys came from all over the country to attend the funeral and pay their respects.”

Phil was a member of SFA ROTC from 1978 to 1982. He credits older cadets he met through his dad and former ROTC instructors for his successful military career. After his SFA graduation, Phil was among a group of military officers chosen to form the 3rd Ranger Battalion at Fort Benning. He later served in the 2nd Ranger Battalion at Fort Lewis, Washington. Thirteen of his 30 years of service were spent in special operations.

After he had served in the Army for almost two decades, Phil was selected to attend the Army War College, which is a graduate school for very successful lieutenant colonels and colonels. Admittance is by invitation only, and invitees must have served in the armed forces a minimum of 18 to 20 years. Annually, only approximately 380 military officers are invited to attend.

“I was able to do all these things because of the training I received at SFA,” Phil said. “The people I was exposed to as a young boy helped me make the ranks. My foundation began there.”

Phil now lives in Belton and works at Fort Hood as a Department of the Army civilian.

For John, who began working at SFA in 2013, the Calahan thread of military continuity is still tangible on campus. “When I walk past my dad’s former office or see my brother’s picture displayed in the Military Science Building, I still feel their presence here,” John said.

John received a Regular Army commission as an infantry officer and served 21 years on active duty with numerous deployments in Iraq, Korea, Bosnia, Alaska and the United Kingdom. He commanded the 1st Battalion, 13th Infantry Regiment at Fort Jackson, South Carolina, from 2008 to 2010, where he led the training of thousands of soldiers prior to their deployment to Iraq and Afghanistan.

“I had the privilege of being stationed with men I’ve looked up to my entire life,” John said. “I was with my brother in Iraq, Lt. Col. Ken Osmond ’73 in Korea, Col. Marshall Reed ’73 and Lt. Col. Herb Flora ’71 at Fort Benning, and Col. Craig Morton ’74 at Fort Polk, Louisiana.”

During its five decades, the SFA ROTC program has commissioned more than 600 cadets who have held ranks across the spectrum. However, not all cadets enter the military.

“It really doesn’t matter what career path they choose in life,” John said. “ROTC helps them be a better citizen and leader.”

For the first time in the program’s history, SFA ROTC is now under the leadership of a former member. In May 2018, Maj. James Attaway ’04 assumed responsibility as chair and professor of military science.

Attaway, who had left active duty as a U.S. Army paratrooper with the 82nd Airborne Division, enrolled at SFA and was attracted to the ROTC program after a friend suggested he take a military science elective course. He said his interest in that course eventually hooked him, and he joined the program in fall 2001.

“After getting to know the military science professors, it felt like a close-knit team and environment. It was something I wanted to be a part of,” Attaway said. “I immediately fell in love with the program and felt connected.”

Attaway fondly recalls cadets and faculty members, like then University Police Department Detective Richard Shelton, who also was a master sergeant. “He was an exemplary non-commissioned officer who led from the front in everything he did,” Attaway said.

Two weeks into joining the program, Attaway stood with other cadets and instructors in a classroom as they watched the twin towers fall Sept. 11, 2001. Since he had just recently left active duty, he was seriously thinking of leaving SFA and joining the fight against terrorism until his dad visited campus to talk him out of it.

“I remember my dad saying, ‘I know what you’re considering. Don’t do it. You need to finish college first,’” Attaway said. “He told me if I was going to fight, I needed to do it as an officer.”

So, Attaway stayed in college and upon his graduation had the opportunity to serve in several locations, including Afghanistan, Iraq and Korea, as well as Alabama, Florida and Kentucky.

Like Jim, Attaway feels the pressure to make the ROTC program the “best it can be” by pushing it forward. “My goal is to keep growing the program and increase our exposure,” he said.

What started as one man’s mission in 1968 has developed into a top-notch ROTC program that now enrolls approximately 100 cadets — nearly 25 percent of them female. The program celebrated its 50th anniversary in February with more than 100 former members visiting campus for festivities that included social activities and a luncheon. The events provided a forum for past and current members to connect and share a bond.

Both Phil and John were there, as was Attaway. Jim was there, too, in the stories and remembrances shared by those who fondly remember SFA’s first professor of military science.