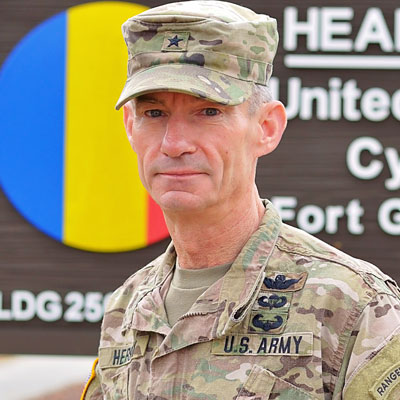 With walls covered in framed distinctions and bookshelves filled with mementos from the past 30 years, Brig. Gen. Neil Hersey’s office is like a 3D, freestanding, four-walled scrapbook of his decades-long military career.

Two years ago, the 1986 SFA graduate was appointed commandant of the U.S. Army’s Cyber School, located in Fort Gordon, Georgia. But a quick scan of his modest office tells at least a surface-level story of the journey that led him to such a prestigious position.

“I did not join and go through the [SFA ROTC] program with the intent of staying in the military for 30 years and eventually becoming a general officer, and I would say that is a typical story,” Hersey said with a slight grin.

A sea of Army and Joint Commander coins for excellence lay beneath a thick layer of glass that covers a round table. “My plan was to get experience and then move over to law enforcement. But what I found was the mission, the people and the opportunities have continued to keep me in.”

Hersey came to SFA interested in law enforcement and with the long-term goal of attending a federal or state law enforcement academy. He did not pursue ROTC at the start, but one elective course pointed him in that direction.

“One of the electives I took was marksmanship, and when I was in that class, they told me there were scholarships available for ROTC, so I started asking questions,” Hersey said. “I realized ROTC suited the kind of person I am. It was well aligned with my long-term goals.”

Hersey received a Bachelor of Arts in criminal justice from SFA with a minor in military science. He earned his commission, went into the military intelligence field and kick started a career that would, at key moments, build upon his past experiences and draw him further into a career in which he is very passionate.

“The Army is a people business, and I’ve met some of the best people in the world. One percent of our population raises their hand to serve, so I thank them as often as I can,” he said, adding that it’s surreal to think how far he’s come. “About the time I was selected for lieutenant colonel, I had to finally admit to myself that I was a career guy. To think about where I am now — I have to pinch myself. It’s very humbling.”

Membership in the armed forces has led Hersey to cities all around the world. But an expeditionary lifestyle was not foreign to him. Hersey’s father worked for the Army and Air Force Exchange and, at a very young age, Hersey had already logged multiple moves, at least one overseas, before his family settled in Southwest Dallas.

After graduating from Duncanville High School, enrolling at SFA was an easy choice.

“SFA was seen as one of the best in the state school system,” Hersey said. “Then I visited the campus and just thought it was a spectacularly beautiful area in which to live. The size of the school was perfect for me at the time, too.

“Like many, I didn’t really know what I wanted to study when I went into college,” he added. “I was interested in law enforcement when I started, and SFA had a very good criminal justice program and liberal arts school. Those are other things that drew me to the university.”

Upon graduation, Hersey was commissioned into Army military intelligence, which luckily was one of his top five branch choices.

Hersey’s first duty assignment was with the 7th Infantry Division at Fort Ord, California. Then, in August 1991, he was board selected for rotary-wing flight training and moved to Fort Rucker, Alabama.

Duties within the military intelligence sector run the gamut, but essentially, “you’re taking information and synthesizing it,” Hersey explained.

“Within a formation, you have a commander who runs the organization, and he or she is given a mission. The first thing the commander has to do is understand the terrain, understand the operating environment and understand the conditions needed to be able to fight. As an intelligence officer in the military, you are the person who educates and prepares the commander to complete the mission.”

The weight of such an important responsibility, Hersey said, really only helped him to hone his intelligence skill set.

“One of the great things about the Army is that as soon as you get good or comfortable at something, they’ll throw you new challenges to up your game,” he added. “So, it’s a continual process of leader development and improving your abilities. I think it’s healthy to never completely feel comfortable with what you’re doing.”

In April 1994, Hersey was reassigned to 1st Military Intelligence Battalion (Aerial Exploitation) in Wiesbaden, Germany, before serving a second overseas tour at Ramstein Air Base in Germany. He held several positions at both. In 1999, Hersey was selected to serve as a troop commander and squadron executive officer before being reassigned in 2004 as a special programs officer for the U.S. Army Special Operations Command at Fort Bragg, North Carolina.

“Then I went back to Germany, back to the same unit I was a captain in … and I commanded that battalion,” Hersey said. “Actually, as a lieutenant colonel, I flew the same aircraft that I had flown as a captain. It was fantastic. Then I took that organization and deployed it to Afghanistan.”

Fast-forwarding through a few other reassignments that took him through Fort Hood, among other locations, Hersey took responsibility Aug. 4, 2017, as the commandant of the U.S. Army Cyber School at Fort Gordon, Georgia. The school had opened exactly three years prior.

The world of cybersecurity

The move to cyberspace was a natural fit for Hersey’s talent and experiences. With technology being one of the fastest-evolving industries, staying at the forefront of cybersecurity requires talent in exactly what military intelligence offers — the quick and succinct synthesis of massive amounts of information.

“When the information superhighway was created, it was all built to make information sharing convenient and to create connections,” Hersey said. “As that grew, it became a very easy way for people to be able to do bad things with relatively limited resources. The proliferation of smart devices just creates what we call more attack surface. As that grows, that requirement to be able to defend those will continue to grow.”

With partnerships forming between Augusta University and other Georgia and local entities, the military and commercial sectors are increasingly sharing their information to approach cybersecurity from a more holistic vantage point.

“[Cyber]attacks all fall to one central problem and that is information gathering,” said Dr. Christopher Ivancic, assistant professor and creator of SFA’s new graduate cybersecurity program. “Our online presence has never been so ubiquitous and will continue to grow. Private and government jobs need people who understand cybersecurity and the potential threats we have to deal with.”

Just like SFA’s cybersecurity graduate program, the Army Cyber School builds curriculum based on the National Security Agency’s recommendations. In fact, one of the NSA’s four cryptologic centers is located at Fort Gordon.

“We have a kind of ecosystem in the Augusta area that is very much plugged into what is going on at Fort Gordon,” Hersey said. “The three-star headquarters of Army Cyber Command is moving here in 2020, and we’ll probably have about 70 percent of the Army’s cyber operational force here at Fort Gordon, so there’s a lot of growth.”

Propped up on the windowsill in the corner of Hersey’s office is an insignia of a shield with an upright sword in the middle and the wording “Defend. Attack. Exploit.” cupping the bottom.

The saying is the heart of the Army’s cyber corps and is a constant reminder to Cyber School students of their ultimate mission.

“One of the unique things about the cyberspace branch is that it’s a maneuver force,” Hersey said. “Our network itself is a weapon system and should be looked at that way. You have to defend your weapon system, and you also have to be able to use your weapon system.”

Staying ahead of the rapid growth of technology and cyber threats can be “daunting to think about,” Hersey added, “which is why we create a very challenging curriculum because that is what graduates are going to see when they join an operational force. We think we do a pretty good job at preparing them to do that.”