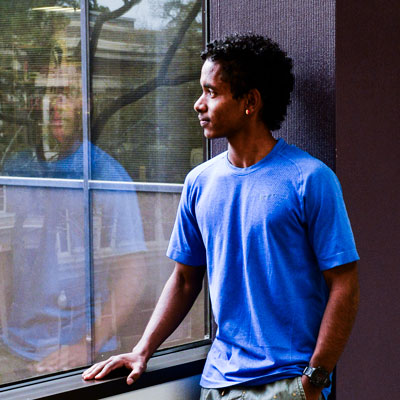 Running for His Life

Eight years ago, SFA student-athlete Awet Beraki was tossed from a truck and left to die in the Sinai Peninsula desert. Held captive for 11 months, he weighed just 40 pounds and lost the use of his limbs after the shackles that bound his wrists and ankles rubbed through his skin and into his bones. After enduring daily torture and believing he would die, Beraki heard voices and approaching vehicles in the distance and had hope.

In 2011, 13-year-old Beraki, the son of a corn and peanut farmer, and his 14-year-old cousin, Ahmed Dirar, were living in their home country of Eritrea in Africa. Beraki and Dirar decided to take a short walk to Eritrea’s second-largest city, Keren, for a day trip to watch the bike races. While there, the pair was approached by a man who offered them work in his garden. The boys, eager for the extra money, agreed to accompany him.

They got in the man’s car and drove to Sawa, a nearby village. The man told them to sit under a tree and wait. Later, another truck carrying two men arrived. The man who had originally dropped them off returned and told them to accompany these men because they would be able to pay the boys much more. The boys, still eager to impress their families with some extra money, got inside the truck.

While driving, the men told the boys how fortunate they were to avoid service in the Eritrean military. For decades, Eritreans have traveled into Sudan to escape conscription, risking imprisonment or execution if caught. However, those en route to Sudan often are kidnapped and held for ransom by Rashaida, a Bedouin Arab tribe known for trafficking humans in Northeast Africa.

The discussion eventually turned to a refugee camp in Khartoum, Sudan, where Beraki and Dirar’s friends from their village of Bogu were now living. The men offered to stop there so the boys could see their friends, and the boys happily agreed.

On the way to Khartoum, the truck stopped in Kassala. The men told the boys someone parked nearby would take them the rest of the way.

“That’s when things started to get crazy,” Beraki said.

After traveling a short distance, the truck stopped outside a brown house. There, a gang of men was shouting in Arabic while brandishing automatic rifles and knives, and the boys began to shake.

“We have nothing,” Beraki told one of the men. Another man stepped closer and pressed the barrel of his gun to Beraki’s face. The man gave him the choice to go or not. “If I said no, I was going to die,” Beraki said.

Another man, gesturing with a knife, walked over to another captive, a 36-year-old ex-military Eritrean who had been caught after crossing the border to escape military duty. The man asked him if he wanted to go to Israel. The captive answered, “No.” As the young cousins watched, one of the men stepped up to the captive and bashed his skull with the butt of a rifle. Two more men beat him with their fists and guns. He collapsed in the dirt.

The men locked the boys in a truck and drove them to a house about 30 minutes away. They dragged Beraki and his cousin inside, where they joined other Eritreans, most of them young, lying on blankets in a circle with their feet tied. With guns pointed at their backs, a man chained them together — 24 boys and three girls.

A week passed with the captives surviving off of rations of bread scraps and a little water until they were packed into the bed of another truck — layering several of the children on the bottom, covering them with a tarp and adding another layer, until all the captives were on board.

For a week, the truck drove through Sudan, only unloading the captives once to feed them. During that week, they drove more than 1,000 miles over difficult terrain.

“When we reached the final destination, we were unloaded,” Beraki said. “The children on the bottom were dead — crushed to death. The men left their bodies in the desert sun.”

After unloading, the captors asked the survivors to identify as either Christian or Muslim, and then separated them into two groups. “They shot the Christians in the head,” Beraki said.

Looking around, he realized they were now at some type of auction. He had attended camel auctions before, and the bustle of the market was familiar to him, but this was different.

The captives were taken to a platform and auctioned. Someone bought Beraki, Dirar and 11 other boys as a group.

The buyer, whom the boys nicknamed Cena, and his men dragged them to a truck and drove through the desert, stopping at a strand of bleak houses. The group was led to a windowless room and chained to six other boys who had been there for six months.

To prove he was serious, Cena took a bolt cutter and cut the chains of one of the captives, dragged him outside and killed him.

Beraki called his father to beg him to pay his ransom. To encourage his father to comply, Cena soaked Beraki’s feet in freezing water and whipped the tops with a metal rod. As Beraki’s family tried to raise the money, his torture continued. Cena hung him by his ankles from the ceiling for an hour each week. He was punched in the mouth, losing three of his teeth and fed little to nothing.

Months passed. Beraki watched the bellies of the women who had been raped by their captors swell. They beat the women and poured molten plastic on their backs. Beraki could no longer walk and was barely breathing.

Eventually, Beraki and Dirar’s families were able to pay the ransom by taking out loans and selling everything they had, but Cena did not release them.

Beraki recalls Cena approaching him in the dark house with a cup in one hand and a gun in the other. He ordered him to stand against the wall. “If you move,” Cena said, while balancing the cup on Beraki’s head, “I’m going to shoot you in the forehead.” Beraki shook with fear, and the cup fell to the floor. Cena put it back on Beraki’s head, and stepped back, while raising his gun. Beraki shut his eyes, trembling. Cena shot the cup.

One night, the captors decided that Beraki, Dirar and some of the other captives were too thin and close to death. They were no longer of any value. So, they loaded them in a truck and drove toward Israel, stopping near the border and dumping them in the desert.

Members of the Egyptian army patrol found the boys and took them to a hospital in Arish. Beraki stayed in the hospital for two months. While there, he met an Eritrean humanitarian worker the Eritreans called Doctor Alganesh. She helped Beraki and his cousin secure money, food, plane tickets and a car ride to Mai-Aini Refugee Camp in Ethiopia. Beraki also was finally able to contact his family and let them know he was alive.

Returning to Eritrea was too dangerous. Even though Beraki and his cousin did not flee the country, the Eritrean military likely would not believe them, and they risked repercussions by returning. It was safer for them to travel to Ethiopia where they could try to come to America.

After the boys had spent a year and eight months at the refugee camp, officials were finally able to get them relocated to the United States. With an uncle living in Virginia, Beraki thought that was where he was headed, but instead, he was sent to Colorado Springs to live with a foster family and attend school for the first time.

The boys had to overcome many obstacles, including not speaking English and being enrolled as freshmen in high school. Eventually, Dirar was able to get housing assistance from a church organization and moved into an apartment. Beraki later joined him.

While living with his foster family, Beraki was encouraged by his foster brother to play football for Palmer High School. “One day, the team ran the Manitou Incline, a trail that gains nearly 2,000 feet in under a mile,” Beraki said. “Before the rest of the team reached the top, I had been there twice.”

The football coach contacted the cross-country coach and told him about Beraki. That season, as a sophomore, Beraki played football and ran cross-country. By his junior year, he was running a 5K in 16 minutes, four seconds and was among the top 100 runners in the country in his age group.

Beraki trained with a group of Kenyan runners, where he met former SFA record-holding distance runner Charles Mathenge, who encouraged him to consider attending SFA. After discussions with the coaches and a visit to the campus, Beraki, who was being recruited by multiple colleges and universities, committed to run for the Lumberjacks.

Wrapping up his freshman year at SFA, Beraki placed fourth at the Arturo Barrios Invitational. As he continues to settle into his life in the United States, he says running has been a way to escape depression and stop thinking about all that has happened to him. “It makes me feel super free and happy,” he said.

Although running is a main focus for Beraki, it is not the ultimate finish line. He is working toward a degree in English and hopes to serve as a translator for the same organization that helped him and Dirar secure housing and pay their expenses while living in Colorado Springs. He says this will enable him to stay in America and still help the Eritrean people, who are escaping human trafficking and coming to the United States.

While watching Beraki interact with his teammates on the track at Homer Bryce Stadium, it’s hard to believe, or understand, all that he’s been through. His gentle voice and kind personality might be two attributes that helped him survive. Many in his position would have given up. But it’s clear that Beraki is a survivor. Even more than that, he is an inspiration.