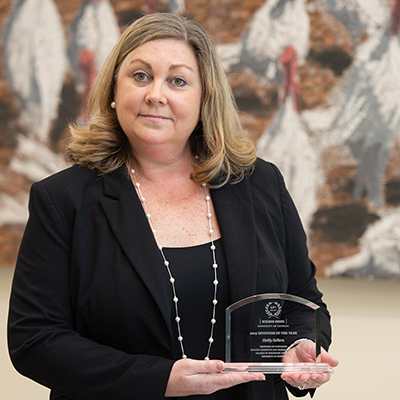 Working to develop lifesaving vaccines isn’t easy, but for Dr. Holly Sellers ’90, professor and researcher at the University of Georgia’s Poultry Diagnostic and Research Center, it’s just a normal part of her day.

Splitting her time between teaching, research and service, Sellers works long hours and juggles various important responsibilities. Despite the difficult nature of the work, she’s known since her first job working in a hatchery at the age of 15 that she would go on to make a difference in the complicated field of avian medicine.

“There’s a lot of science that goes into genetic selection of breeds for food production, veterinary care for poultry health and development of new vaccines for control of important diseases — the whole package,” she said.

Recently recognized for her work by the University of Georgia with the Inventor of the Year award, Sellers is the first woman to receive the honor since 2001. The award celebrates “innovation at the highest level of excellence” and speaks to the type of career she has cultivated.

Sellers got her start when her father, a production manager for a Nacogdoches breeder company, helped her land a job at a local hatchery. While there, she worked hard to learn all she could.

“I remember the first day of work started at 3 a.m.,” she said. “There were many of those days during my summer breaks.”

Sellers eventually moved from the hatchery to the quality control lab.

During her time at the hatchery, SFA also was a vital part of Sellers’ life. She began taking classes at the university while still in high school before later enrolling as an undergraduate and working toward a bachelor’s degree. Though she went through a few different majors, she eventually decided on biology, becoming involved on campus in the Biology Club, as well as the Zeta Tau Alpha sorority. Sellers was particularly influenced by former SFA biology professor Dr. Homer Russell and his approach to teaching.

“His class was, to this day, one of the best classes I’ve ever taken,” she said. “He taught microbiology in a way that delivered the basic information but made it so interesting and relevant to day-to-day life.”

Sellers remembers a field trip the class took to a wastewater treatment plant in Nacogdoches that helped further ignite her passion for the field.

“I was a little skeptical but, upon arrival, Dr. Russell hopped off the bus, and his enthusiasm was pretty contagious,” she said. “We hiked around this place for an hour while he told us, with such animation, about the process of turning wastewater into drinking water. I couldn’t wait for my next microbiology class.”

Sellers sought advice from her supervisor in the lab, a UGA graduate, who encouraged her to take a look at the graduate program in the Department of Medical Microbiology at UGA’s College of Veterinary Medicine. There, Sellers received her master’s and doctoral degrees, completing research for both at the Poultry Diagnostic and Research Center. After graduating, she received a post-doctoral research fellowship at the U.S. Department of Agriculture and Southeast Poultry Research Laboratory, now the National Poultry Research Center.

Sellers then became a professor in the Department of Population Health in UGA’s College of Veterinary Medicine, where she also directs virology services. Her research covers everything from evaluating the pathogenicity of viruses from clinical cases to developing new vaccines. She also focuses on avian reoviruses, which can cause viral arthritis in chickens and turkeys. This virus has exponentially increased since 2012, Sellers said, and the research characterizes new viruses isolated from clinical cases. This helps researchers understand how the viruses are causing diseases so they can develop new vaccines to help control disease.

In her work with the poultry industry, she provides diagnostic services to assist poultry veterinarians in making decisions to provide optimal care. In a typical day, Sellers meets with her lab staff to review clinical case submissions, as well as new cases and the status of in-progress cases. She also communicates with clients regarding laboratory results and assists clients in sample collection and submissions to the lab.

“It’s important to understand as much about diseases that affect poultry as possible to determine the best way to control them,” Sellers said. “The health of poultry is important so that it can continue to be a safe, affordable and readily available source of food.”

“Her contributions to the poultry industry are enormous, and we are very proud of her exceptional achievements,” Jackwood said.

It was this commitment to innovation that led Sellers to being named UGA’s Inventor of the Year. As the first woman in more than a decade to receive the award, Sellers hopes more women will begin to be recognized for the critical role they play in the advancement of science.

“I only recently learned that women are only listed on 12% of U.S. patents,” she said. “However, times are changing, and so many opportunities are now available to help women and underrepresented minorities get involved in innovation. I’m excited to see how this number changes in the near future.”

And though Sellers recognizes the worth of the work she’s done, she is adamant that she’s not reached this achievement alone.

“I have had so much support and help from so many people at UGA and the poultry industry that I really share this award with them all,” Sellers said.

In addition to her research and work in industry, she teaches graduate and professional students avian virology and mentors graduate students.

“I love working with students,” she said. “Their interests, ideas and enthusiasm inspire me and serve as a refresh for all I do.”

Sellers hopes to impart the same love and enthusiasm for the science she first experienced at SFA.

“The time I spent as a student at SFA was life changing,” Sellers said. “I found my true calling as a microbiologist and took classes that prepared me for the opportunities ahead. My time at the university provided a great foundation for my post-graduate studies, and I felt very prepared for graduate school.”

While Sellers’ work pulls her in a lot of different directions, she wouldn’t have it any other way. “No day is the same, and I’m never bored,” she said. “I feel so blessed to have this career.”