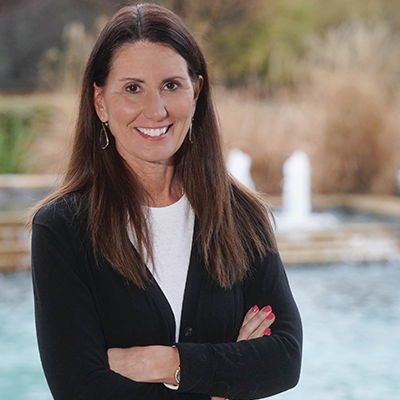 Many teenagers take on babysitting jobs, but for Lori Wendt ’89, her babysitting connections led to a job with Barney, the most-beloved, Emmy Award-winning dinosaur in history.

Wendt was born in Ohio, and her family moved to the Dallas area when she was in sixth grade. When it was time to start college, she appreciated the size of the SFA campus, as well as its proximity to her home.

“I loved the trees; they reminded me of Ohio,” she recalled. “Since I was majoring in education, I knew it was the best university for me. And SFA still maintains that reputation. When my school district hires teachers, or when we work with student teachers from SFA, it is always obvious they have been well-prepared for this career.”

Wendt was fresh from college herself when she had an opportunity to work with Sheryl Leach, the creator of “Barney & Friends,” a series of home videos that became a hit television series nominated for 15 Emmy Awards. Wendt had been a babysitter for Leach’s children.

“I had just graduated from SFA when Sheryl asked me to come work for her on the show,” she explained. “I was excited to get in the classroom, so I declined the offer and accepted a job teaching first grade in Lewisville.”

Wendt subsequently earned a master’s degree and, eight years later, accepted the second offer from Leach to work on the show. It was a major transition for Wendt, who had never been on a television set. Fortunately, her training at SFA was a valuable asset in the career shift.

“The opportunities the students have to work in the Early Childhood Laboratory and in the SFA Charter School classrooms, in addition to student teaching, are major factors in their success,” Wendt said. “Reading about and studying different classroom methodologies is important, but there’s nothing that can take the place of being face-to-face with a child.”

In her role with the producers of “Barney & Friends,” Wendt assisted in creating curriculum to help ensure the purple Tyrannosaurus’ daily activities and excursions were as educational as possible. Field testing was another of Wendt’s job responsibilities that put her early childhood education background to good use.

“To be a successful teacher, it is crucial that material is developmentally appropriate and presented in the right way,” she said. “When we brought in new characters, new music or if we changed sets, I visited day care centers with DVDs to show the children, and I took notes of their reactions to each segment — at what points did they sing or laugh? When did they walk away?”

For Wendt, working for public broadcaster and television program distributor PBS, sometimes referred to as America’s largest classroom, was the perfect job.

“They were all so invested in doing things for the right reasons,” she said. “I loved going to conferences and meeting people like Mr. Rogers and people from ‘Sesame Street,’ whom I grew up with, but meeting them as almost a peer. It seemed surreal — like worlds colliding.”

Wendt also enjoyed working with child actors, such as Selena Gomez and Demi Lovato. But the most influential person she met was Dean Wendt, a voice actor who was the voice of Barney for 10 years.

“We enjoyed working together on the show, and got married during the last year shows were being produced,” she said. “I was living in Allen at the time, and Dean had been living in Addison.”

Since the production of “Barney & Friends” episodes ended, Dean does voiceover work from his in-home recording studio for companies ranging from American Express to Toyota, Nikon and Bulova. Lori returned to full-time teaching, and her time with “Barney & Friends” still plays a valuable role in her work.

“We weren’t tied to state or district educational standards, and limited finances didn’t play a role in the decisions we made,” she said. “So, the sky was pretty much the limit when it came to creativity. But I do find that I try to use that kind of creativity in my teaching — to do whatever I can to make something work.”