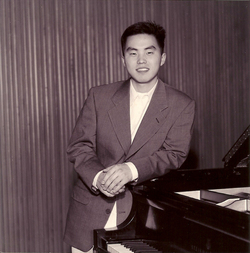 Currently on the piano faculty at Sam Houston State University, Cho was invited to present a recital of classical piano repertoire at SFA, according to Andrew Parr, professor of piano at SFA.

Cho's program contains some lesser-known pieces by J.S. Bach and Joseph Haydn, plus two Nocturnes, Op. 62, of Frédéric Chopin, which were composed near the end of his life, Parr said. The major work on the program is Igor Stravinsky's Three Movements from Petrushka, which Parr described as "a highly colorful and virtuosic piano work based on the composer's ballet of the same title."

"The ballet tells the story of three puppets brought to life only to discover that life can include love, jealousy, anger and hurt," Parr said. "The ballet was premiered by Sergei Diaghilev's famous Ballets Russes with Bronislava Nijinsky as Petrushka."

A pianist from southern California, Cho made his first appearance as the Young Artist's Guild winner where he performed numerous solo and chamber recitals. Cho earned his bachelor's degree from the Oberlin Conservatory of Music, a master's degree from the Peabody Conservatory of Music at Johns Hopkins University and a Doctor of Musical Arts degree in piano performance from the Shepherd School of Music at Rice University.

Cho is often an adjudicator for many piano competitions and presents master classes at music festivals throughout Texas and Louisiana. His students have won scholarships to Montecito International Summer Piano Festival and top prizes in both local and national events, including the TMTA Young Artists Piano State Competition, Forum Competition in Texas and the MasterWorks Festival Concerto Competition in Indiana.