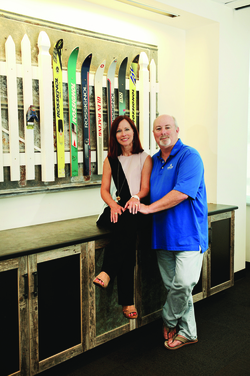 Lynn and Randy Atchison met while both were SFA students in the 1980s.

It's ok that Lynn Atchison '82 spends every day at work thinking about vacation. As chief financial officer of HomeAway, the world leader in vacation rentals with more than 1 million listings worldwide in almost 200 countries, Atchison's accounting degree from SFA led her to her dream job.

When the Duncanville native first applied to attend SFA, she had her heart set on a career as a forest ranger. "I think I had just read a Jack London book or something," she recalled. "When it was finally time to go to Orientation, that dream had faded, but I decided to go anyway. I thought if I still liked SFA, I would stay."

Fortunately, Orientation was a success, and Atchison met the roommate she would live with for the next four years. "I started taking my basics, not really knowing what I wanted to do," she explained. "When I took accounting, it was easy for me. My roommate told me that was not normal, and that I ought to stick with accounting because I would get a good job. So I did."

Atchison became an SFA cheerleader during her sophomore year. She was part of the squad that launched the now-famous "Axe 'em, Jacks" hand sign, and she worked during several summers as a National Cheerleaders Association cheer instructor. After graduating, Atchison worked for a national accounting firm and then began a consulting career, providing senior-level financial advising to smaller companies that did not need a full-time CFO. Many of the companies she worked with were tech companies that were beginning to flourish in Austin in the 1990s.

Atchison was hired as the CFO of Hoovers Online in 1996. "Hoovers started out as a printed publication - Hoovers handbooks - that provided background information about businesses. Previously, the only way to get this information was to go to the library and get a prospectus. We took all that information and put it online and created a subscription-based Internet company to provide proprietary business information to assist in corporate decision making."

As CFO, Atchison had an integral role in the company's initial sale of stock to the public in 1999. "Those years were just so interesting to me because there were so many brilliant ideas in technology businesses that completely failed from an execution standpoint," she said. "There were people who had amazing vision, but they weren't able to 'product-ize' their concepts."

The dot-com crash at the turn of the century didn't destroy the company and instead fueled the infatuation Atchison had for Web-based commerce. "Hoovers survived because we were subscription based and still had revenue coming in. We took the company from losses to profits and sold the business to Dun & Bradstreet in 2003."

Atchison became CFO of HomeAway in 2006. The company had been established the previous year, when the founder realized that finding and booking beach houses and mountain homes was not as easy as reserving a hotel room. Transforming the fragmented vacation rental industry into the world's leading marketplace for online vacation rentals required both vision and numerous acquisitions of other companies.

"We have completed 22 acquisitions and now have offices in 18 countries around the world," Atchison said. "You have to be comfortable with ambiguity and with change. It doesn't mean that you can't expect that things be orderly - credits have to balance here just like they do everywhere else. But if you are too rigid, you wouldn't be happy in an environment like this."

Although her daily work no longer revolves around the basic accounting concepts she learned at SFA, Atchison still credits her degree as the foundation for her success. "Accounting is the language of business. My accounting degree taught me the language and got me in the door to a public accounting firm where I was exposed to how companies operate and make a profit. My education gave me the perfect base for the first eight years of my career, which led to my work with emerging technology companies, and that became my passion."

Atchison is equally passionate about HomeAway and the business of vacation rentals. "It's a growing way to travel, particularly for families and groups. It's not as relevant if you are a business person traveling for one night, but it is ideal if you are looking for the experience, time to spend together with your family and friends. You can have privacy when you want privacy; you can have togetherness when you want togetherness. It's kind of the opposite of a hotel, where there is no privacy and 'togetherness' may mean visits with everyone sitting on the edge of the bed."

Atchison and husband Randy '83 have even purchased vacation rental properties of their own. "We recently bought a house in Angel Fire, New Mexico, but our favorite place is the beach. We have a house in Rockport that we only rent to wintering Texans so that it's open to us in the summer. It's close enough so that we can get away from home for the weekend." And getting away from home is something Atchison always encourages.

HomeAway's corporate offices are decorated with a variety of vacation mementos, including hundreds of snow globes representing cities and countries from all over the world and birdhouses, which also serve as the company's logo.