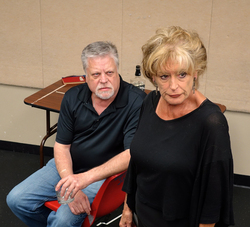 Veteran stage actors Brad Maule and Rhonda Plymate Simmons rehearse a scene from "August: Osage County" by Tracy Letts to be presented by the SFA School of Theatre April 28 through May 2.

Directed by Scott Shattuck and featuring Nacogdoches residents Rhonda Plymate Simmons and Brad Maule, "August: Osage County" focuses on what happens to the Weston family when their patriarch disappears and they hurriedly assemble at the rural Oklahoma home of his hilariously caustic, pill-popping wife. Their outrageous conflicts and lies collide to launch the corrosive comedy that won the 2008 Pulitzer Prize for Drama and became the basis for the hit movie starring Meryl Streep and Julia Roberts.

"August: Osage County" by Tracy Letts will be presented at 7:30 p.m. Tuesday through Saturday, April 28 through May 2, in W.M. Turner Auditorium on the SFA campus. A 2 p.m. Saturday matinee is also scheduled.

When Shattuck, who is director of the SFA School of Theatre, saw "August: Osage County" in its Broadway production, he thought it was the best new American play he had encountered in a long time.

"I knew immediately that our audiences would love the soapy story, the delightfully outrageous characters and the painfully hilarious satire of family life in today's America," he said.

In the ensuing years, Shattuck began talking with long-time SFA's Friends of Theatre president Rhonda Plymate Simmons, who had a successful career as a professional actor before she moved to Nacogdoches and earned her master's degree in theatre at SFA, about her desire to return to the stage in one last great role.

"One night as we were chatting, it all came together in both of our minds," he said. "Rhonda had seen the play and loved it as much as I had, and I wanted to direct it. It has a great ensemble with opportunities for lots of students, including excellent roles for women, but it probably wouldn't work well without a strong, mature female actor in a key role.

One problem that remained was finding an equally strong, mature male actor to play the husband of Simmons's character.

"But I lucked out," Shattuck said. "When I asked Brad Maule, he immediately said yes."

In the play, after Maule's character, a distinguished but aging poet, disappears one August day, his sharp-tongued wife, who is suffering from cancer and has become addicted to her prescription pain medications, calls her three daughters, her sister and their male partners together to await word of his fate at their otherwise nearly empty house. As her drug-fueled candor becomes increasingly raw, the family's secrets begin to crumble, and the last of the tenuous emotional bonds that had held them together come unglued, Shattuck explained.

"As wild as the story gets, what's most unnerving about the play is how realistic it is," Shattuck said. "These people are smart and witty, isolated and tormented, but they're definitely three-dimensional, detailed and all-too-recognizable. For better or worse, most of us will recognize the squirm-inducing undercurrents of a picturesque family gathering.

"So I've asked the actors to go for a very authentic, conversational style - even those whose characters are quite flamboyant," he said. "That seems to make the humor cut all the more deeply."

Shattuck warns that the language and adult situations make this play unsuitable for children and those who may be sensitive to profanity, obscenity, and drug and alcohol abuse. But adults who are up for a "spectacularly entertaining roller-coaster ride into the acidic guts of 21st century life" will not be disappointed.

"I'd love for our audiences to leave with some of the same excitement I felt when I first saw the play," he said, adding he hopes patrons experience "that amazement at the power of dramatic storytelling to involve and enthrall and shock us, even without an all-singing-all-dancing chorus or twirling laser lights.

"I hope we'll make some jaws drop the way mine did," he said.