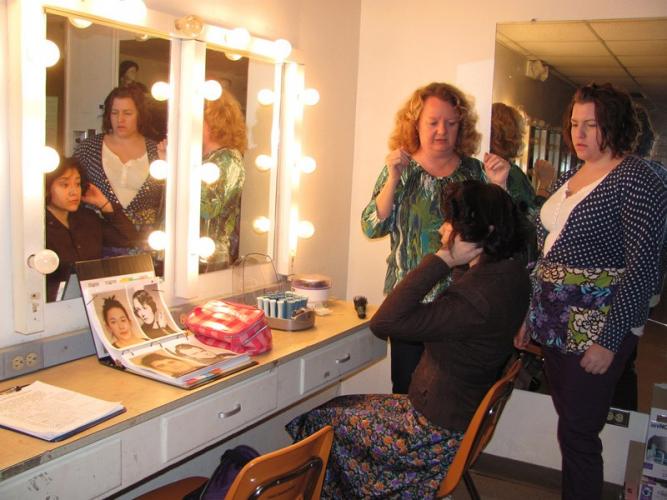 
NACOGDOCHES, Texas - While directing the upcoming SummerStage Festival production of "The Emperor's New Clothes: The Musical," Angela Bacarisse will not just draw from her experiences as an actor and director. She can also rely on her expertise as a designer of costumes, makeup, scenery, lighting and props, as a dancer and choreographer, as a stage manager, grip, stage electrician … the list goes on … to make this musical just as successful as "Spamalot," which she directed last fall.

Bacarisse teaches in the design and management areas for the Stephen F. Austin State University School of Theatre - stage/theatre management and beginning through advanced costume technology, design and makeup courses. But when it comes to theatre, she's done it all.

Originally a dancer, she was cast at 13 in the Voigt Kempson Dancers in New Jersey, cast at 15 in Focus on Dance in Philadelphia and awarded a scholarship at 17 to study at der Tanze Schule in Stuttgart, Germany.

"During that experience, I realized that dance was not going to be a lifelong career," she said. "So I applied to college to study theatre. I had been doing theatre in high school, both acting and stage managing."

As a theatre student at the University of Delaware, she auditioned for the Delaware Dance Company, a professional ballet company. As a full time student, she could not be a full company member, but she danced as a soloist in the Nutcracker for two years and taught third-year ballet, advanced jazz, modern dance and also tap for adults.

"When I decided to pursue an MFA in theatre, I finally had to set dance aside as a performer and work primarily as a lighting designer and sometimes costume designer for Project Motion in Memphis, Tenn.," she said.

She also taught lighting and costume design at her first teaching job for the Department of Theatre and Dance at James Madison University in Harrisonburg, Va. She taught at the College of Charleston and University of North Carolina-Asheville (UNCA) before coming to SFA.

She was a runway model for Macy's/Bamberger's department stores and appeared as Strawberry Shortcake at children's events in the stores. Her varied career also included a stint as a professional cheerleader for the Philadelphia Stars in the former United States Football League.

She was the tailor for the TV series "Elvis: The Early Years," did extras wardrobe on the film "Great Balls of Fire!" and crafted beadwork for the African villagers in "Ace Ventura: When Nature Calls." She designed costumes for music videos produced by Joanne Cash and spent a few summers in San Francisco volunteering at Colossal Studios as a grip (the screen arts' equivalent of a stagehand) and in craft services (catering) while also doing makeup for commercials and music videos before the live action studios closed and became Pixar. She also worked as an electrician and dresser at the Thomas Wolfe Auditorium in Asheville, N.C.

"While teaching at UNCA, I started working summers at the Texas Shakespeare Festival in Kilgore," she said. "Everyone laughed at me for leaving the beautiful mountains where the summer averages in the mid-80s to live in Texas! But I fell in love with East Texas, and my future husband, so I targeted schools in the area, and when a position came open at SFA, I got it."

For the SummerStage Festival, Bacarisse chose to direct the children's favorite "The Emperor's New Clothes: The Musical" by Karen Boettcher-Tate and Bill Francoeur because of its range in styles of music.

"I was looking for a show that would be appropriate for families and tells a good story," she said. "I really want to do the story of young King Arthur, but it was just too soon after 'Spamalot' to tackle that.

"For some reason, I was thinking that 'Emperor' was smaller than 'Spamalot,' but it isn't," she said. "It is shorter but has almost as many cast members. We are having fun, and the students are working hard. Dr. Tod Fish of the School of Music faculty is working with us on the singing. Students are learning a lot about dance and the physical aspects of a musical as well as the presentational style of the play."

Additionally, Bacarisse wants her students to "understand professionalism - caring about the work, no matter how minor the detail." She wants them to have experience in "quick and appropriate problem solving."

"This involves having a lot of specific technical knowledge in theatre, but also having the life skills of leadership and confidence in decision-making," she said. "I want them to be the best at what they do, and if that is sweeping the floor, well, by golly, they will do it better than anyone else."

It's a busy time for Bacarisse. With all her other duties within the School the Theatre, she doesn't often direct. But this summer, she is directing three plays.

"First is 'Emperor's New Clothes,' and then I am directing two non-musicals that will be traveling to Edinburgh, Scotland, to participate in the international Fringe Festival," she said. "I am very excited that I will be working with two new plays - one by SFA playwright-in-residence Jack Heifner and one by SFA graduate Nick Pinelli and senior theatre major Allison Day. I have a great cast lined up as well as student designers to actualize the shows. We will be in Scotland for two weeks performing and seeing all kinds of art and performance."

This year's SummerStage Festival is slated for June 26 through July 17, and in addition to "Emperor," the festival features Tennessee Williams' masterpiece "The Glass Menagerie." 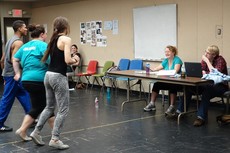 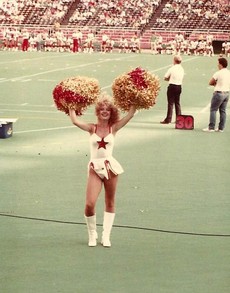