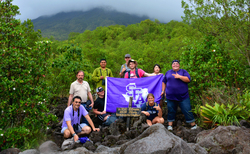 As the morning sun began to peek through the towering walls of vegetation lining Costa Rica's Tortuguero Canals, the air of Tortuguero National Park sprang to life with the reverberating calls of mantled howler monkeys. Deep, guttural and powerful enough to be heard up to three miles away, the calls are a key form of the species' communication. This particular morning, the daybreak interchange between members of the tree-dwelling group filled the ears of six Stephen F. Austin State University students, eliciting exclamations of awe and a myriad of photographs.

Costa Rica's National Institute of Biodiversity reports that although the country accounts for only 0.03 percent of the Earth's surface, it is ranked as one of the most biodiverse countries in the world. The country's ecotourism-based economy is founded upon this immense biodiversity, as well as the nation's efforts to sustain it. Costa Rica has signed 45 international environmental treaties, and in 2007, the government announced a goal to attain carbon neutrality by 2021.

Despite the great advances made by Cost Rica, it, like every other country, faces many challenges as it works to balance the needs of its public with the mission of conservation. Though the country is considered to be the most progressive and developed country in Central America, it still struggles to reduce poverty rates among its citizens.

"This class really opened up a lot of perspectives for me, and not just from the point of view of being in a different country," said Sabrina O'Neal, a senior forest wildlife management major at SFA's Arthur Temple College of Forestry and Agriculture. "I was able to gain a completely different perspective from the other students in the class."

O'Neal explained that the two-week SFA international studies course, Leadership Development and Community Engagement, was comprised of students from a variety of majors, each bringing unique insights to course discussions focused on proposing multifaceted solutions to the challenge of balancing economic development and natural resource conservation.

"There are no easy answers to the problems we are facing, and in order to make progress, we must utilize a variety of ideas from people of different expertise," Scognamillo said.

As a trained wildlife biologist who spent years studying jaguars in South America, Scognamillo's first passion is wildlife. Since 2012, both Scognamillo and Kronrad have facilitated the creation of conservation and economic development projects in Argentina, Brazil, Paraguay and Costa Rica. Scognamillo said that as his career progressed his single-minded focus began to evolve, and he realized that the natural resource in question is only one piece of an expansive, complex puzzle.

To incorporate these varied aspects into the course, students visited multiple economic, municipal and social development programs throughout the country. Additionally, students toured conservation areas and met with leaders of Costa Rica's National System of Conservation Areas to discuss current projects as well as challenges to natural resource management.

"They're facing a lot of the same problems that we are in the U.S.," said Ashley Johnson, a senior forest recreation management major. "It's just on a different scale."

Johnson said the course enabled her to compare and critically assess the conservation and social development efforts taking place in Costa Rica and the United States, providing her with more insight into the complexity of the issues.

Scognamillo said this awareness is precisely why he and Kronrad believe study abroad opportunities are so important to SFA students.

"We are trying to foster the combination of personal and intellectual development and show them how they can use this growth for positive social change," Scognamillo said. 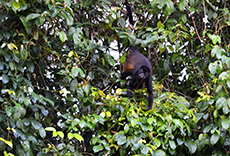 Despite its small landmass, Costa Rica is ranked as one of the most biodiverse countries in the world, making ecotourism a foundation of the economy. Pictured, a mantled howler monkey eats vegetation in Tortuguero National Park. The park, located on the Caribbean Coast of the country, can be accessed only by boat or airplane.