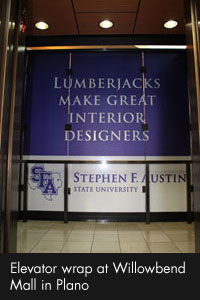 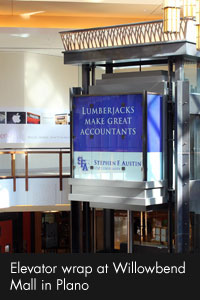 We have completed the first phase of our advertising campaign, and all 24 billboard vinyls have been relocated from their original locations to replace an SFA vinyl on a board at another location. Our reports from Richards/Carlberg show that as of May 8, SFA ads have appeared more than 21.5 million times. We've had nearly 112,000 clicks on these ads, exceeding industry benchmarks. The reporting also shows that we've had over 130,000 visits to the campaign landing page and more than 30,000 visits to other areas of our website, such as our Admissions page, specifically attributed to the marketing campaign. 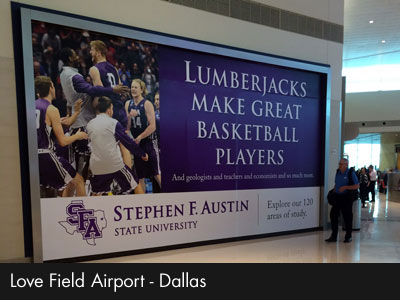 Campaign graphics that were created specifically for use on the SFA Facebook page have been very well received – so far, the most popular has been "Lumberjacks make great teachers," which was shared by 113 people, "liked" by 794 people and commented on by 34 people. "Lumberjacks make great musicians" also was popular, with 31 shares, 299 "likes" and 12 comments. And a "Lumberjacks make great graduates" banner was a very popular feature at our commencement ceremonies this past Saturday.

Some individuals have expressed interest in how the featured professions were selected. There’s no clear-cut formula, but an effort was made to strike a balance between careers for which SFA is known and careers people don’t necessarily associate with SFA. Our marketing team at Richards/Carlberg also selected careers that the majority of high school students would be likely to perceive as being the most enjoyable and worthwhile.

Regents recently approved use of the official SFA logo – the one that has been in use by the university since 2004 – in a one-color version, either purple or black. If the logo is being used on a dark-background, a white version of the logo may be used. These logos are available for download at the University Marketing Communications website.