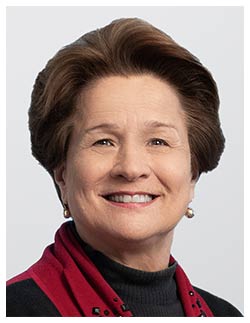 Emily Parker graduated from SFA with a bachelor's degree in economics and finance in 1970. She began as a pre-medicine student before switching to a business degree with a desire to pursue law. After graduating from SFA in three years, she attended Southern Methodist University's Dedman School of Law.

Parker started her law career with Thompson & Knight by becoming its first female attorney and, later, its first female partner. She is a leader in oil and gas tax litigation and has continued to serve the practice for more than 40 years. In addition to oil and gas, she served as acting chief counsel of the IRS from 2003 to 2004. Parker is the only woman to lead the IRS legal team, supervising more than 1,500 attorneys and overseeing all litigation involving the IRS.

Outside of her profession, Parker also is an asset to her community, dedicating time and expertise to serving in various roles to the American Bar Association's Tax Section. She served as the chair of the Dallas Bar Tax Section and served on the Council of the State Bar of Texas Tax Section in the 1980s. Parker is involved with several nonprofit organizations in the Dallas-Fort Worth area, including Court Appointed Special Advocates, or CASA, and serves as a founding member of the Women's Foundation of Dallas.

She created the Emily A. Parker Scholarship to benefit academically high-achieving students pursuing any major at SFA. Students must maintain a 3.0 GPA, be in good standing with the university and exhibit high moral character.

Make a gift today and have an immediate impact on SFA students and programs. Your gift helps create educational opportunities for current and future Lumberjacks and can support academic and athletic programs, research initiatives, and scholarships in perpetuity.