What does Texas' largest manufacturer of landmark signage have in common with health care workers fighting a pandemic? The answer is saving lives.

Until early March, employees at National Signs in Houston were busy building between 50 to 100 major sign projects a month. The 27-year-old company has been responsible for creating some of Houston's most iconic signage, including installations for NRG Stadium, Minute Maid Park, Toyota Center, Gallery Furniture and the Smart Financial Centre in Sugar Land.

When the COVID-19 pandemic began to surface in the United States, and the first confirmed case in Texas was announced March 9, the leadership team at National Signs had already begun discussions regarding what the company might do to help.

Located in a 50,000-square-foot facility in the heart of the Texas Medical Center, National Signs is housed within the perfect proximity to help its neighbors.

“We have awesome engineers, designers and craftsmen,” said Cody Johnson '94, CEO of National Signs. “We knew we had the expertise and resources to help. After Gov. Greg Abbott made his plea for more personal protective equipment, we were immediately ready to assist.” 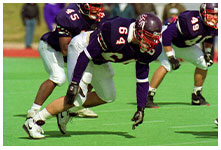 Before his appointment as National Signs’ CEO in December 2019, Johnson founded One World Polymer Products in 1999. He started the engineered rubber products design and outsourcing company with only $2,000 and grew the business to a net worth of $5 million before selling it in 2004.

He then served 14 years as CEO of Core Polymer Moulders, a company that provides engineered rubber products for the oil and gas, aerospace, railroad, truck and trailer, mining, and offshore marine industries.

“After spending 20 years as the CEO for businesses that mainly cater to the oil and gas industry, I was extremely excited for the opportunity to join National Signs,” Johnson said. “As the leading provider of signage and architectural accents and one of the top distributors of LED signs and electronic message centers in the United States, I knew of the employees’ attention to detail and the high-quality products they make. Everyone working here genuinely cares about our customers and our products.”

Julius Lyons, National Signs vice president of operations, said he’s proud of what the employees have been able to accomplish.

“As the pandemic started to unfold in Texas, we were all concerned what the future might hold and if our business would be able to continue operations,” Lyons said. “But after a serious think-tank session, we landed on a couple of ideas we thought could help our country’s immediate needs and started to zero in on which ones we had the capability to produce.”

Working together, employees at National Signs were able to reconfigure the equipment — computerized router tables, vinyl plotters and precision metal-forming machines — to produce face shields and electronic messaging center trailers. They also developed a prototype for a hospital bed that could be used if medical facilities reach bed capacity.

Part of Johnson’s motivation to make face shields was due to a shortage of PPE at New York City's Mount Sinai Hospital, where his brother, physician James Johnson ‘94, ran a COVID-19 intensive care unit.

“As we know, New York was hit especially hard during this pandemic,” Johnson said. “I knew of the struggles health care workers there were dealing with in getting the equipment they needed. I wanted to do what I could to help alleviate that situation in Texas.”

The face shields are lightweight, one-size-fits-most and easily disinfected. The employees at National Signs can manufacture thousands of face shields per day. They are then delivered to various health care facilities, including the University of Texas Medical Branch at Galveston, where Johnson and his team were able to quickly send 8,500 face shields.

“Early on, we ran very short on face shields,” said Dr. Joan Richardson, chair of the Department of Pediatrics and director of neonatology at UTMB. “After a brief conversation with Cody, National Signs quickly began production of plastic face shields for use in our labor and delivery and newborn ICU areas. The employees of National Signs have been amazing in their rapid response and ability to help us protect our health care workers and patients.”

National Signs also has made and delivered face shields to police, fire and sheriff’s departments throughout Texas.

“During the progression of the pandemic, the Galveston County Sheriff’s Office began attempting to purchase PPE for staff members,” said Lt. James Roy of the criminal investigation division of the Galveston County Sheriff’s Office. “It was difficult to get in a timely manner due to nationwide demand. I reached out to Cody, and National Signs was able to deliver 50 face shields to us the same day I called.”

As the United States transitions back to work, National Signs plans to provide PPE to national and state stockpiles, as well as many large American corporations.

“Since the initial crisis began, we have improved our products, pricing and marketing, and we’ve been rewarded with requests for quotes and strong interest for more than 10 million units from the Federal Emergency Management Agency; the state of Texas; Marriott Hotels; United, Delta and American Airlines; the Toronto Transit Authority; and the NFL,” Johnson said.

In addition to face shields, the company is manufacturing electronic messaging center trailers. The EMC trailers allow municipalities, hospitals, restaurants and other businesses to communicate complex messages at maximum social distance using a single- or double-sided digital display mounted on a trailer, which can be towed and set up almost anywhere.

“These devices have multiple communication uses,” Johnson said. “One of the most common is wayfinding. They can be used to help the public navigate entrances and exits for COVID-19 testing. The messages also can be changed remotely, so updates can be posted without having to go outside and further the risk of exposure.”

Acrylic barriers are another product National Signs is making for places where social distancing is not possible. The company designs, fabricates and installs the barriers at checkout counters, reception areas and other locations to help keep people safe. As Texas began to reopen in late April, National Signs installed 60 acrylic barriers at Goodwill stores across Houston and donated 1,000 face shields to help protect its employees and customers.

“I am pleased Cody and his team wanted to help Goodwill’s employees safely return to work,” said Steven P. Lufburrow, president and CEO of Goodwill Houston. “Cody and National Signs’ Vice President of Sales Matthew Nicolay were so kind to offer Goodwill-branded face shields to assist in the safety of our employees and customers. We are blessed with our partnership and the generous gift from them.”

Although it’s difficult to predict where the world will be a year or even a few months from now regarding the pandemic, it’s almost certain COVID-19 will continue to be a threat, and the lifesaving products National Signs produces will stay in demand.

“We’re still making signs,” Johnson said. “That’s the core of our business, but we’re also proud to continue assisting those on the front line fighting this pandemic. It’s rewarding to know the products we make are helping save lives.”

Image Caption: The employees at National Signs in Houston have reconfigured the manufacturing facility in the wake of COVID-19 to produce face shields, emergency messaging center trailers and other lifesaving equipment.