Taking a Page Out of Poage's Book

The pandemic through an emergency room doctor's eyes

Though normally a blur of chaotic movement, the emergency room of Amarillo’s Northwest Emergency at Town Square has, in recent days, become noticeably quieter.

For Dr. Frederick Poage '06, the facility’s medical director, the significant drop in patient visits has been the strangest side effect of the ongoing global pandemic. Out of fear and uncertainty, more patients are pushing the limits on when to seek care for dire medical conditions, and it’s making his job as an ER physician increasingly tricky.

“Patients are delaying coming in for emergencies because they are scared,” Poage said. “I saw a kid who was experiencing abdominal pain for a week end up having severe appendicitis, requiring surgery and hospitalization to receive IV antibiotics. If his family had brought him in the first or second day, he could have most likely gotten an appendectomy and gone home the same day.” 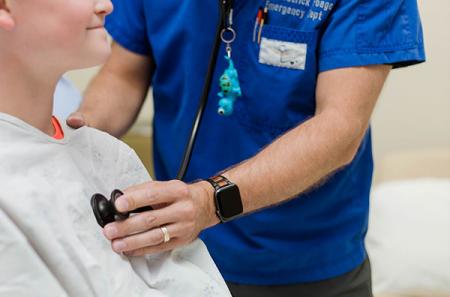 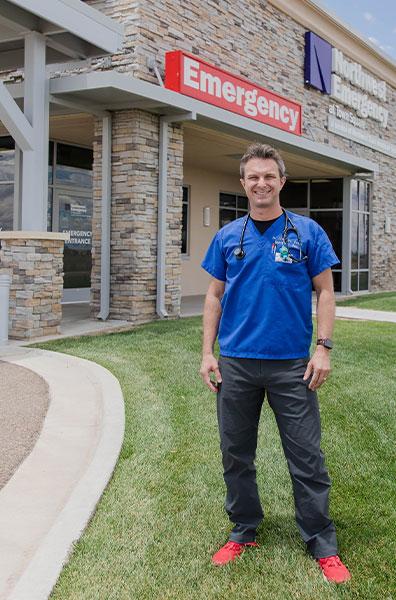 Poage has been one of the many health care workers on the front line in the battle against COVID-19. As an ER physician, medical director and professor at Texas Tech University, he’s in a unique position to witness firsthand the vast array of emotional, local and medical responses to the virus.

While he understands the fears associated with high levels of change and uncertainty, Poage still finds it concerning that people are placing fear over their own health.

“A gentleman called one night reporting chest pain but said, ‘I think it’s just indigestion.’ He checked all the boxes for a heart attack, so I advised him to come in immediately,” Poage said. “He said his wife has stage 4 cancer, and he was scared of bringing COVID-19 back home to her. He finally showed up at 4 a.m. having a full-blown heart attack. Thankfully, we were able to get him to the cath lab immediately for three cardiac stents, but this sort of delay has been the strangest part to me.”

From SFA to residency

Poage is certainly no stranger to the emotional toll health issues can have on people and their families. His first wife, Carla, whom he met while attending SFA, was diagnosed with ovarian cancer in September 2009. She went through six and a half years of chemotherapy, surgeries and hospitalizations before running out of treatment options. She died in December 2015 during his first year in a residency program.

Meeting Carla in January 2003 remains one of Poage’s most important memories from his time at SFA. Some might even say it was the very size of SFA’s campus that brought the couple together.

“I was late and running across campus to another class, walked in [to my human physiology class] and there was a seat open in the front row of the second-tier next to her,” Poage reminisced. “I asked her to coffee after every class for three weeks before she agreed! We got married in July of that year.”

SFA continued to root itself in the couple’s lives in significant ways.

“Organic chemistry with Dr. James Garrett was one of my favorite courses,” Poage added. “I remember Dr. Garrett’s energy and positive approach — he always seemed in a good mood. Dr. Garrett taught both me and Carla, and we named our oldest son after him — Bryton Garrett Poage.”

Just before Carla’s passing, Poage took a leave of absence from his residency program in Amarillo and moved himself, his wife and the couple’s two boys back to his hometown of Lufkin to be near family.

While her death did not redirect his interests in medicine, it did “change the way I viewed patients in general,” he said. “It made me more empathetic. It changed how I interacted with patients. I treat all patients like they are my family, because I’ve been on the receiving end of the bad news. You can’t quite describe how you feel.”

In July 2016, he returned to his residency program in Amarillo but with a catch — he wanted to ensure his two boys could still see family on weekends following the loss of their mother. So how does one handle a nine-hour commute?

“I looked into chartering a private pilot to fly me back and forth, but after assessing the cost, I decided to just become a pilot myself and buy an airplane,” Poage said.

After completing private pilot training in June 2016 at Angelina County Airport, Poage bought his first airplane — a Cessna 172XP — and flew himself, “my two boys and our little Yorkshire terrier to Amarillo for the first time when we moved back a few weeks later.”

Just a few short months later, he met his current wife, Annie, and the couple was married in March 2018.

Poage has been able to put his pilot’s license to use during the pandemic, as well. As a volunteer pilot for Angel Flight South Central, he’s flown patients from the Texas panhandle to Dallas, Houston and Colorado, including a baby with significant birth defects, a man with a brain tumor and a woman with ovarian cancer.

Health care in the COVID-19 era

As one component of a teaching hospital system, the emergency room in which Poage works has played a role in all levels of pandemic response, from on-the-ground emergent care to clinical trials for coronavirus-related treatments.

"I have had to discuss over the phone with the family of a patient having a stroke that it may have been the last time they will see their loved one."

Northwest’s ICU has been part of an ongoing treatment trial studying the most effective ventilator use for COVID-19 patients. Within his specific area — the emergency room — Poage’s own team, for which he serves as lead investigator, is part of a national clinical trial for a new treatment of the virus. Although they are limited on the information they can share, he did explain his emergency room is the first in the Texas panhandle to become involved. 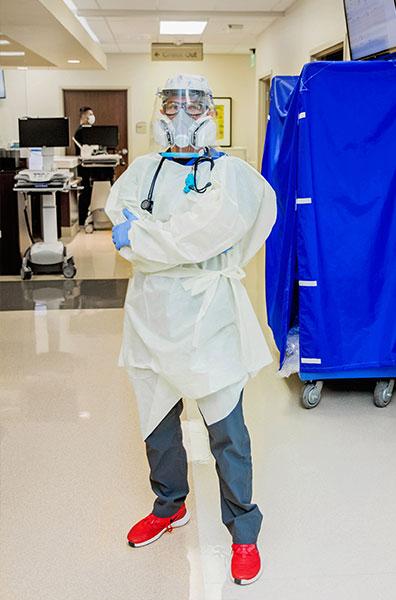 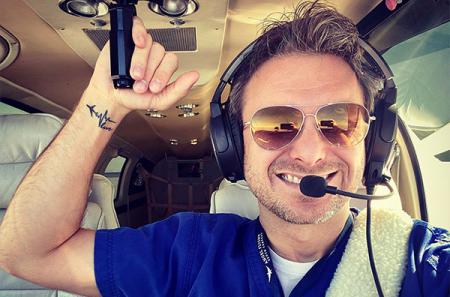 “We are in the Federal Drug Administration’s clinical research phase three out of four, meaning we’re in the human testing phase, so we are able to involve patients from the very beginning in the emergency room on this treatment,” Poage said. “It’s a double-blinded, randomized, controlled clinical trial, which is the gold standard for trials.”

The speed of response Poage said he’s witnessed within the medical community to the virus is a testament to many things.

“A typical drug, from initial discovery to placement on the market, can take about 10 years,” he explained, “so the fact that COVID-19 testing, treatments and trials are being developed so rapidly is a huge testament to the whole science community’s research capabilities and determination.”

Dealing with the present,
Preparing for the future

No one may yet know the extent to which the pandemic will cause lasting economic and cultural change, but its emotional toll has been immediate and far-reaching. Perhaps few know that better than health care workers fighting to keep the virus at bay.

“The hardest part is having to tell patients in the emergency room that their loved ones cannot be present,” Poage said. “I have had to discuss over the phone with the family of a patient having a stroke that it may have been the last time they will see their loved one. I have teared up on a few occasions. This also affects our nursing staff just as hard. Thankfully, my family has been emotionally stable and excellent throughout this.”

As fear and uncertainty about the future of the virus continue to grip the world, Poage offered advice on keeping a healthy body and mind.

“I would advise to wear a mask when out in public and not to go out if experiencing flu-like symptoms, but I also have advocated for people to remain clear minded and not succumb to panic,” he said. “We need to approach this with a focused mindset and remind ourselves this is not just about ‘me’ but about my neighbors, as well. We need to keep animosity and politics out of medicine.”