In August 2020, Hermelinda "Hennii" Céspedes '17 & '21 and her two children, Teddy and Catalina, ages 7 and 2, boarded a flight to Anchorage, Alaska, from Houston for the teaching opportunity of a lifetime.

"I always felt a calling to Alaska," Céspedes said.

Gerald Anthon, a fellow teacher in Nacogdoches, worked for the Bering Strait School District and recommended it to Céspedes. He's now a teacher at Nacogdoches High School.

"He encouraged me to pursue teaching in a remote village, and that really brought my dream to life," she said. 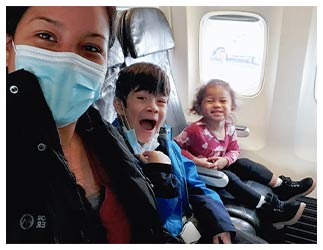 Céspedes accepted a sixth-grade teaching position with the district.

After attending new teacher orientation in Anchorage, retrieving the two months' worth of supplies she mailed herself from Nacogdoches and buying a new cellphone from the only provider that services her destination, Céspedes flew with her children to the village of St. Michael.

Getting her bearings on the Bering Sea

The village is on the east coast of St. Michael Island in the Norton Sound, an inlet of the Bering Sea. It is 125 miles southeast of Nome in the Central Yup'ik region of Alaska. 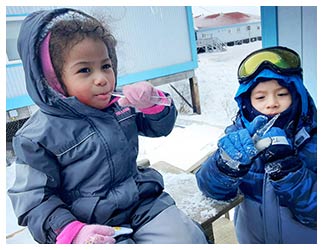 The shortest day of the year offers about four hours of daylight. During December and January, Céspedes and Teddy had to wear headlamps to light the way to and from school. The longest day in June provides a little more than 20 hours of daylight. The temperature varies on average from 1 F to 61 F and is rarely below minus 23 F or above 69 F, though the "wind chill easily drops into the minus 20s F," Céspedes said.

To prepare for winter, which began Sept. 25, 2020, with the first snow, the Céspedes family purchased snow bibs; mukluks, the traditional Yup'ik waterproof boot made from rabbit; and kuspuks, a piece of Yup'ik clothing considered to be the original hoodie.

During ice and snow season, the principal at Anthony A. Andrews School transported teachers and some students to and from school in a van that occasionally got stuck in the snow.

"I've had to swim through snow up to my waist to get to school before," Céspedes said.

Sometimes during her swim to school, Céspedes' braided ponytail froze. So did the tears from her eyes watering in the cold. She often had to tightly hold on to Teddy to keep him from blowing away.

On the worst weather days, the village closed down, so students and teachers didn't have to navigate the big snow hills that blocked the streets or dodge the debris kicked up by the strong winds on the way to school. When temperatures started rising in April, the local bears awoke from hibernation, and the school's assistant principal sent notices like this: "I was told there are four bears roaming the island. The most likely place they might end up is the dump, so please visually scan your surroundings."

During their first year in the village, the Céspedes family adapted to power outages, low water pressure, limited resources and high prices.

"I pay $80 for 7 gigabytes of data a month for Wi-Fi internet," Céspedes said. "This means no streaming videos. We have invested in a lot of DVDs."

Despite these challenges, Céspedes completed her online Master of Education in teaching and learning with an ESL/bilingual concentration from SFA in August 2021.

So far, her biggest personal success is "maintaining a 4.0 in my graduate classes with a small amount of internet data to attend class and complete assignments. This is all while being a full-time teacher and a single parent in a remote Alaskan Native village with no Netflix."

Not teaching in Texas anymore 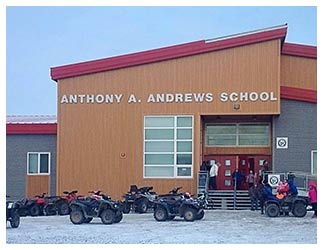 Céspedes also celebrated teaching successes during her first year in the village.

"I helped get one student to sixth-grade reading level," she said. "At the beginning of the year, all my students tested at second- and third-grade reading and math levels, but by the end of the year, six out of 10 showed growth and met their end-of-year goals."

These achievements required the knowledge she gained as an undergraduate at SFA earning her Bachelor of Science in human sciences with a concentration in human development and family studies and a minor in music.

"I learned a lot of patience, love and understanding from many of my music instructors, including Debbie Berry, Dr. Scott LaGraff and Dr. Tod Fish," Céspedes said. "These three were not only amazing professors but also amazing mentors filled with good life advice and God's grace. I want to make an impact on my students' lives like these professors did on mine."

This outlook served her well as she grew accustomed to the students in her new school.

"Some had bottled-up anger, and they would yell; hit walls, desks and themselves; and throw things across the room," Céspedes said. "In Texas, the student gets suspended, or police get involved, but here, we are trained to deal with students who have experienced trauma. I learned my students' triggers and almost completely eliminated these outbursts through patience, love and consistency."

The COVID-19 pandemic also complicated her first year as a teacher in St. Michael. When cases were reported in the vicinity, the school temporarily closed so a COVID testing team could fly in to assess the villagers.

Attendance and parent involvement were challenges, too. On some days, only one or two students came to class, Céspedes said. Four out of 11 parents attended her parent-teacher conferences.

But the year presented some lighter moments, like when Teddy arrived at school in his underwear after forgetting to put on his jeans under his snow bib. And during Teacher Appreciation Week, the school principal ordered Subway sandwiches delivered all the way from Nome to show his thanks.

Céspedes also got to witness and hear about several of her students' "firsts" — visiting a restaurant ("The kids said, ‘There's this store where you can sit down and order whatever you want, and then they bring you what you ordered. The best part is it's cooked and hot!'"); eating grapefruit (Her students bit into them thinking they would taste like oranges, and their faces scrunched at the sour fruit. "They were mad," Céspedes said); and earning awards at the end of the school year.

"One of the things I looked forward to when I was a student in elementary school was the awards ceremony, so I got them some medals and certificates and boosted their self-esteem a little bit," Céspedes said.

Céspedes said she was able to connect with her students during the school year a lot more than she originally anticipated. She's part of the first generation of her family born in the U.S. Her family is originally from Reynosa, Mexico, and her native language is Spanish.

"My students' culture is very rich, and, with me being Hispanic, mine is, too. We got to learn about each other's culture, and we made it fun."

More than 30 years before the U.S. purchased Alaska from Russia in 1867, the Russian-American Company established a fortified trading post called Redoubt St. Michael to trade with the Yup'ik people of western and southwestern Alaska. In 1897, the U.S. military built Fort St. Michael to address the con artists drawn to the area during the gold rush. Some reports state that 10,000 people lived in the village at that time because it provided a pathway to the Yukon River and a chance to strike it rich. Today, the population is slightly more than 400 people, mostly of Yup'ik and Russian descent.

Due to western colonization, the Yup'ik language was almost lost in St. Michael because villagers were physically punished if they spoke it, Céspedes said.

"Currently, only the elders speak it. They didn't teach it to their children for fear they'd be punished in schools," she said. "My new goal is to become proficient in Yup'ik so I can help the mayor, Bobbi Andrews, revive the language in the village."

Yup'ik is still the primary language in some of the region's other villages. The University of Alaska Fairbanks has tapped into this knowledge to offer Yup'ik classes so people like Céspedes can learn it and help preserve the region's culture.

In the meantime, students at the school honor their culture with the annual Alaska Native dance performance for the community in late April. Called Eskimo dancing, this was a form of prayer before Christians brought their religion to the region and forbade villagers from performing their dance.

"The Christians equated it with devil worship," Céspedes said. "So only a handful of elders still know these dances, and only one is willing to teach our students a part of the old culture," she said.

Céspedes wants to stay in St. Michael at least six years before possibly returning to Texas to be near her mom in Mission. This means Teddy and Catalina will have plenty of time to practice the dance, and Céspedes can perfect her Yup'ik.

"I told my sixth graders that I want to stay to see them graduate," said Céspedes, who is the first person in her family to graduate from a university. "Maybe that will encourage them to keep studying and stay in school."