T.J. Maple's backyard aviary is home to more than 200 ducks and other birds, including rare species, such as freckled ducks from Australia and Bernier's teal from Madagascar. Photo by Gabrielle Czapla '20

SFA Spirit Teams coordinator's career, hobby are anything but routine

Gliding across the water, ducks appear confident and unruffled on the surface while paddling nonstop beneath to propel themselves forward. The same applies to members of SFA's Spirit Teams. They make difficult routines look easy to audiences unaware of the months of grueling practices that have helped catapult them to 13 national championships.

As longtime SFA Spirit Teams coordinator and owner of a backyard aviary housing more than 200 ducks and other birds, T.J. Maple '08 & '21 has the well-honed skills and experience it takes to ensure those he manages (both feathered and otherwise) continue to thrive.

"I have the best of both worlds," Maple said of his two seemingly disparate passions, raising ducks and coaching collegiate dancers and cheerleaders. The first of his two loves dates back to when he was just 7 years old and living with his grandparents after his parents divorced.

"The first thing my grandfather did was take me to the feed store to buy some ducklings," he recalled. "That was a difficult time in my life and, although I didn't realize it at the time, taking care of those ducks every day helped me cope. It was a safe space, and the ducks provided a distraction and a positive outlet. They have fascinated me ever since."

Maple's interest in ducks and other birds grew throughout his childhood. He raised show pigeons at one point, and at 16, his hobby expanded to include exotic and migratory species. Around the same time, the Iowa, Louisiana, native began thinking about turning his hobby into a career, and he eventually enrolled at McNeese State University to study wildlife management. But, by then a new interest, and the unexpected talent accompanying it, had started to emerge.

"I would go and watch my cousin's peewee dance team, which was not very good, and I wanted to help," Maple said. "I had absolutely no idea what I was doing, but I was young and confident. I somehow managed to convince the coach to let me hold a summer dance camp and teach them their routines for the upcoming season. That's really what started all this."

Maple's foray into dance and coaching wasn't entirely out of the blue. While working on his high school yearbook, he had been assigned to cover the dance team. He attended all its practices and performances and was intrigued by the choreography and all that goes into learning and rehearsing a dance routine. At home, Maple mimicked the dancers' techniques and combinations, and he found they came naturally to him.

"As a kid growing up in Louisiana, I tried all the usual sports. I played baseball and even ran cross-country, but it wasn't for me," Maple said. "I just didn't have the skills or confidence to do those things. But I could do everything the dance team could do, and my interest was piqued."

For a brief time, Maple pursued both passions simultaneously, taking college classes for his wildlife management degree while spending increasing amounts of his free time choreographing routines for the youth dance team. His beloved ducks officially took a backseat in the late-'90s when he left McNeese to coach and choreograph full time, eventually opening his own studio in Southeast Texas. In 2000, his growing reputation led to a job coaching the Dayton High School Dazzlers drill team.

"Again, I had no business being there. I was a 21-year-old college dropout with no teaching experience, living in a dance studio and sleeping on a futon," Maple said. "But I worked hard, and I figured it out. We won nationals my second year there, and that's when I knew my career was going to be about dancers, not ducks."

While Maple acknowledges he was "blessed with a creative mind," without a degree or any formal dance training, he knew his options would be limited. So, he decided to enroll at McLennan Community College in Waco, and even though he had missed tryouts, the dance coach gave him a spot on the team.

Maple danced for MCC for two years. Then, ready for the next step, he tried out for SFA's pom squad in 2004 but didn't make the team. He stayed on at MCC another year as an assistant dance coach, and when SFA posted an opening for a part-time pom squad coach the following year, he went for it. The rest is SFA history.

In the past 16 years, Maple has guided SFA Spirit Teams to 13 national championships, 11 for dance and two for cheer. To cover their travel and other expenses, the groups raise approximately $100,000 each year by hosting instructional camps and clinics. In addition, the program annually awards more than $60,000 in scholarships to SFA dancers and cheerleaders. Although SFA's national competitive reputation has exponentially grown, Maple said the Spirit Teams' top priority remains supporting the Lumberjack and Ladyjack athletic teams and engaging with fans at games.

"It is definitely a tough-love situation because he wants us to be successful as a team, of course, but also in life," said Ennis senior Emma Howard, one of the current SFA dance team captains. "I think his real genius is how he pulls together all these people with different talents and skill levels and builds on all those individual strengths until, at the end of the year, we are not only ready to compete at the highest level, but we also are a really close family."

In 2008, Maple earned his SFA degree in kinesiology with an art minor and joined the university staff full time. The SFA Spirit Teams program has grown through the years to include all-girl, large and small coed cheer teams; pom dance, team performance dance and hip-hop dance teams; mascots; and student spirit organizations. Along the way, he has built a program culture that prioritizes success both and on and off the performance mat and sidelines.

"I think T.J. was created in a lab to be a great spirit teams coach," said Dr. Michael Preston, former SFA director of student affairs who hired Maple in 2005. He said Maple's passion for dance and eye for talent, coupled with his student-first mentality, made him the perfect fit for the position. "He is awesome with his students, and his routines are so much fun to watch," said Preston, current executive director of the Florida Consortium of Metropolitan Research Universities. "I personally believe he is the best coach in the United States, and I don't think it's really even that close."

Maple admits that around 2019, the day-in, day-out demands of the job started to weigh on him, and he feared burnout was close behind. On a lark, he bought four mallard ducks and built a small habitat in the backyard of his new home near campus. Just as they had when he was a little boy, he said, the ducks renewed his spirit and helped rebalance his life. The initial months of the pandemic provided unexpected time to expand what he calls "a peaceful oasis for both me and the ducks." He cherishes the quiet times spent on his patio, petting his dogs and listening to the waterfowl chatter and splash around in the aviary.

"During their annual eclipse, ducks lose all their colorful feathers, but after a while, the bright plumage comes back, and they're beautiful and confident again," he said. "It's like they're constantly shedding their comfort zone and reinventing themselves, starting fresh and trying something new. I like to think we have that in common." 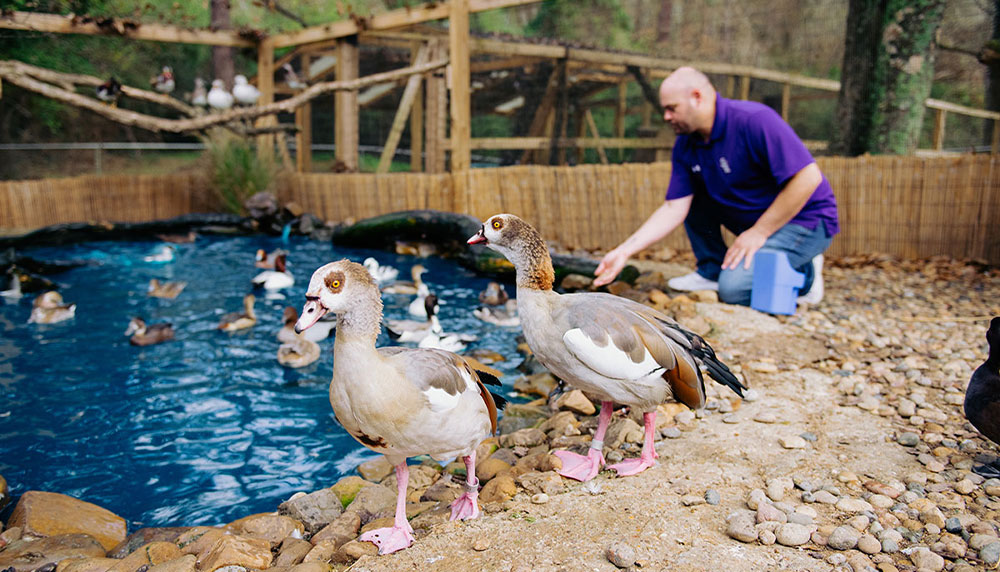 Above image: Maple offers food to one of the ducks enjoying a swim in the aviary while a pair of Egyptian geese takes a stroll around the pond. Photo by Gabrielle Czapla '20