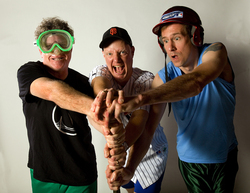 The Reduced Shakespeare Company, known world-wide for its comedic stage shows, will present "The Complete World of Sports (abridged)" at 7:30 p.m. Friday, Jan. 28, in W.M. Turner Auditorium as part of the SFA College of Fine Arts' University Series.

NACOGDOCHES, TEXAS - "It'll be a marathon of madness and mayhem as the world's greatest sporting events are shrunk down to theatrical size" is one of the promotional taglines for "The Complete World of Sports (abridged)," which will be presented at 7:30 p.m. Friday, Jan. 28, in W.M. Turner Auditorium. The show is part of the Stephen F. Austin State University College of Fine Arts' University Series.

The newest comedy by The Reduced Shakespeare Company, described by The Boston Globe as "A mad dash through every sport ever played," has received rave reviews. The New York Times called it "Intellectual vaudeville . . . as loony as it is beautiful," and The Lowell Sun (in Lowell, Mass.), described it as "A triumph of speed, endurance, comic timing, (and) high-scoring word-play . . . ."

"Many East Texans may have seen an enactment of one of The Reduced Shakespeare Company's other six shows, such as 'The Complete Works of William Shakespeare (abridged)' or 'The Complete History of America (abridged),'" said Sylvia Bierschenk, director of Arts Information at SFA. "But here's a chance to see the originators of these works performing their own comic genius."

Founded in 1981, The Reduced Shakespeare Company has performed in venues across the globe, won the Shorty Award in New York, the Delft Audience Award in Holland, and has been nominated for an Olivier Award in London and two Helen Hayes Awards in Washington, D.C. The troupe has been heard on National Public Radio, the British Broadcasting Corporation and Public Radio International./p>

"We're looking forward to bringing this company to East Texas," said Bierschenk. "It will appeal to everyone who loves sports, who hates sports, or who just likes to laugh!"

Visit www.reducedshakespeare.com to learn more about the troupe.

Prior to the performance, Professor Scott Shattuck, director of the SFA School of Theatre, will give an informative talk about the company at 7 p.m. in Griffith Gallery, across the hall from Turner Auditorium. The audience is invited back to the gallery after the show for a reception honoring the event's corporate sponsor, Commercial Bank of Texas.