SFA's A Cappella Choir to present 'Tempest and Harmony' 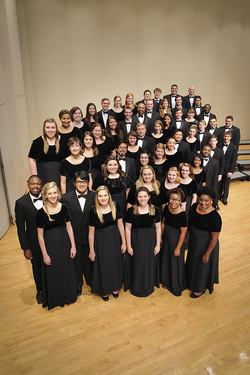 SFA's A Cappella Choir will perform "Tempest and Harmony" at 7:30 p.m. Thursday, Oct. 24, in Cole Concert Hall on the SFA campus.

NACOGDOCHES, TEXAS - The Stephen F. Austin State University College of Fine Arts and School of Music will present the A Cappella Choir performing "Tempest and Harmony" at 7:30 p.m. Thursday, Oct. 24, in Cole Concert Hall on the SFA campus.

The concert title was selected because of the multitude of emotions music can evoke, according to Dr. Tim King, director of choral activities for the School of Music.

"Whether it is the text or storyline, a composer's personal circumstances, or simply the musical language itself, music is dramatic," King said. "Yet in the presence of this drama, music has the beautiful ability to resolve conflict."

The opening number - a setting of Psalm 24 - is composed by Martha de Luna of the Dominican Republic, an SFA graduate student in piano and a member of the A Cappella Choir.

Among the other works to be performed is William Byrd's "Ave Verum Corpus." Byrd (1540-1623) is considered by many to be England's first master composer, according to King.

"A Catholic in Protestant England, Byrd composed the 'Ave Verum Corpus,' his best-known work, as part of a set of songs for the entire church liturgical year," King explained.

"This piece is dedicated to the memory of those who perished in the shipwreck of the Estonia on Sept. 28, 1994," King explained. "'Canticum' uses texts from Nuntii Latini, the weekly news broadcasts in Latin by the Finnish Broadcasting Company, and texts from the book of Psalms and the Requiem Mass."

Schaffe in mir, Gott, ein rein Herz, (Create in me, O God, a pure heart) Op. 29 by Johannes Brahms (1833-1897), which is "probably the most often performed work of Brahms' motet genre," King said, will also be performed.

Pianist Dr. Ron Petti, director of accompanying at SFA, will be featured in "The Sounding Sea" by Eric Barnum.