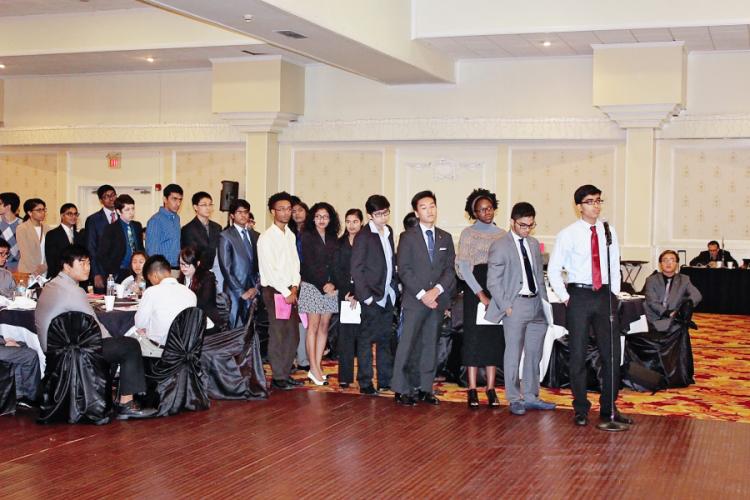 Fort Bend ISD high school seniors await their turn to ask panelists a question during the 2016 Global Citizenship Series. Now in its sixth year, the conference, organized by the Stephen F. Austin State University College of Liberal and Applied Arts, focused on various dimensions of violence and intolerance both in the U.S. and abroad. The 2016 event was hosted at Safari Texas Ranch in Houston.


NACOGDOCHES, Texas — How does the government define extremism and is that definition fair? And what is the difference between terrorism and self-defense?

Hundreds of Fort Bend ISD seniors gathered at Safari Texas Ranch this month to posit these and other probing questions to academic and federal officials during the 2016 Global Citizenship Series. This year’s conference, held Oct. 7, was titled “Intolerance and Violence: A Global Perspective.”

“The topics of discussion are great and really fit into what’s going on today: terrorism and things the kids might perceive as domestic terrorism,” said Melissa Smith, a Fort Bend ISD teacher at Hightower High School in Missouri City, Texas. “We are a very diverse district. So when these topics come up, a lot of these kids are well versed in the topic. They follow it themselves.”

The annual conference, organized by the Stephen F. Austin State University College of Liberal and Applied Arts and sponsored by the Office of the Provost, included one morning and two afternoon panels.

The two morning panels touched on concepts, forms and responses to violence as well as violence in the United States. The afternoon panel opened a discussion about international violence. Panelists included professors from SFA, Houston and New York universities, and also personnel from the FBI and Drug Enforcement Administration.

Six-time former U.S. Ambassador Ryan Crocker served as a lunch-time guest speaker where he discussed his 37-year career in the U.S. Foreign Service and time spent in some of the more turbulent Middle Eastern countries.

“Terror is a tactic,” Crocker explained. “It’s not a philosophy. It’s also known as asymmetrical warfare. I know a lot about this because (as an ambassador) I’ve had some pretty close calls. One of (my predecessors) in Lebanon was assassinated by a group called the Popular Front for Liberation of Palestine. I mention this because the leader of the group and his theology surprised a few people. It was headed by George Habash (who) was not a Muslim. He was a Christian, as was the leader of the Democratic Front for the Liberation of Palestine.

“The ideology of both groups, such as it was, was not based on any theology whatsoever. They were communist. So decades later when we hear this awful commentary that Islam and Muslims inherently gravitate toward violence and terror, it is just wrong,” Crocker added.

This is the sixth year for the Global Citizenship Series. For the first five years, the conference focused on specific geographic regions, including Europe, Asia, the Middle East and Latin America. The series was developed as a means for SFA to bring high-quality academic programs that improve international understanding to Texas students and residents.