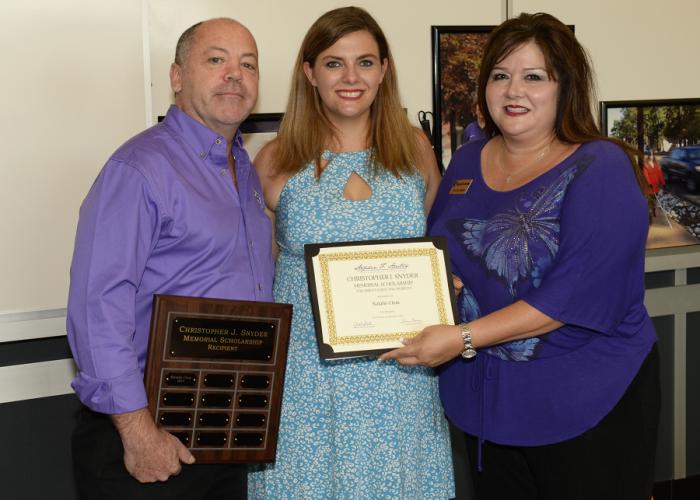 
NACOGDOCHES, Texas — With tears still welling at the corner of her eyes, Natalie Clem of Memphis, Tennessee, offered her sincere gratitude for being named the first recipient of the Christopher J. Snyder Memorial Scholarship, which was recently endowed at Stephen F. Austin State University.

“Orientation and mobility is my passion,” Clem told the crowd gathered in the Human Services Building third-floor conference room, her voice cracking slightly with emotion. “Christopher J. Snyder is an inspiration to me because he made it from Chicago to Nacogdoches in 1997 to do something that I love and I’m passionate about as well. To be able to follow in his passion and love for orientation and mobility is an honor.”

Snyder was a two-time SFA graduate and a certified orientation and mobility specialist.

Snyder moved to Nacogdoches from Chicago in 1997 to pursue a bachelor’s degree in orientation and mobility, and he graduated in 1999. He returned to Illinois to work with visually impaired students, teaching them how to travel safely in different environments.  In 2001, Snyder and Nacogdoches native Kim Luna were married, and they lived in the Chicago area until 2004.

“He arranged a trip for his seniors to Wrigley Field, and their assignment was to be able to plan the route, get on the bus, get on the train and get to their seat in the stadium,” Luna said during the scholarship ceremony. “I met them at the train station, and it was very touching and gave me a real admiration for those of you who are helping and working with others, especially the blind. Your profession does make a difference in the world. It impacts students every day.”

Snyder served each summer as an instructor for a six-week SFA course teaching other teachers orientation and mobility skills to better assist their visually impaired students.

In 2005, he earned his Master of Education in special education with an emphasis in serious emotional disorders and autism. He began working for Nacogdoches ISD that year as an assistive technology teacher and orientation and mobility specialist, working with special-needs students and their teachers throughout the district.

Snyder passed away in January after being diagnosed with cancer in August 2016. To honor his memory, Snyder’s family worked to create a scholarship for orientation and mobility students. Enough donations were received from family, students and friends to establish the permanently endowed Christopher J. Snyder Memorial Scholarship.

The scholarship’s endowment will allow “the memory of Chris to continue through each and every scholarship recipient,” Luna said. “I think it takes very special people to be in this field, and Chris was very passionate about his profession. Until his very last day, he was very much a part of education and the orientation and mobility community.”