With fourth generation on the horizon, Zola Avery’s SFA legacy is aging gracefully 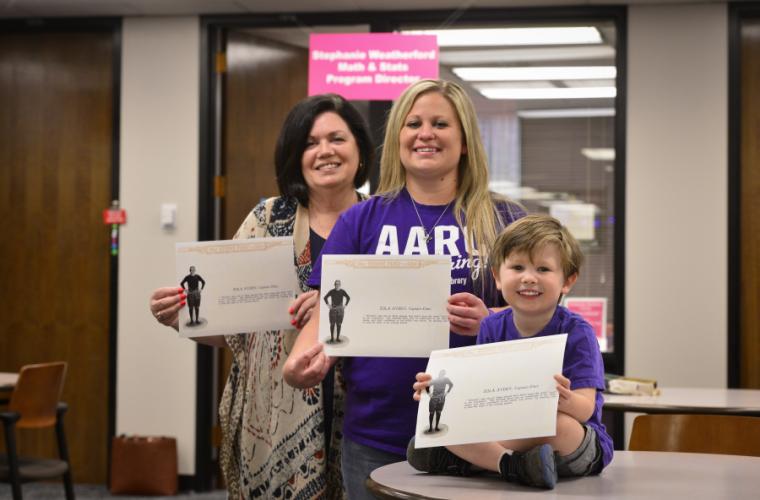 More than 40 years after his death, the legacy of Zola Emile Avery, a member of SFA’s inaugural 1923 class, is alive and well. Holding a yearbook photo of Avery in his football uniform are, from left: Avery’s granddaughter, Maggie Brown, great-granddaughter Stephanie Weatherford ’08 and ’11, and great-great grandson JT Weatherford.


NACOGDOCHES, Texas — Zola Emile Avery is kind of like a founding father. He was part of the inaugural 1923 class at what was then Stephen F. Austin State Teachers College, played for the university’s first football team, and was a charter member of a campus literary society. Known as Zoomie for his skill on the gridiron and the basketball court, he graduated in 1927 with a degree in agriculture.

If those were the only accolades he’d accumulated, then they would be enough. As SFA approaches its 100-year anniversary, people like Avery, those who helped establish the university, will get their second 15 minutes of fame. But with Avery, his influence goes well beyond what he did in sports and in the classroom.

Over four decades after his death in 1977, Avery’s imprint endures as three generations of his descendants – and more than likely a fourth in the coming years ¬– have gone to SFA for their education. Two of them, granddaughter Maggie Brown at the Early Childhood Lab, and great-granddaughter Stephanie Weatherford ’08 and ’11, at the Academic Assistance and Resource Center, are still on campus.

Avery’s only daughter, Nacogdoches-born Betty Avery, passed away in April. The emotions and recollections caused by her death sparked a renewed interest in family history and, in particular, the history of her father. Stephanie Weatherford, who had never met her great-grandfather, started asking around and digging into records. With help from SFA staff, she found photos and old yearbook listings. More importantly, she found a kinship dating back to the 19th Century, to Avery’s father, patriarch Joseph Avery.

“The best part about all this is that I feel a greater connection to my family,” Weatherford said. “Learning that education was so important to my family as far back as my great-great-grandfather made me proud. Education is my passion. It’s who I am and it’s why I work for SFA.”

Born in Nacogdoches on Sept. 12, 1902, Avery was among the youngest of 12 siblings. Grounded by the encouragement of father Joseph, all of them earned college degrees. It was this culture of learning and education that was probably behind Avery being named after French writer Émile Zola. In a twist, at some point Avery rearranged his name to Zola Emile so that he didn’t have the initials E.Z. Avery, of course, could not escape the Zoomie nickname.

Avery’s college career includes being a captain and coach of the football team, which during his era played opponents like Center High, Beaumont Junior College, and Hillsborough Junior College; a member of the basketball team; two years with the President Press Club; one year as business manager of Pine Log; and three years as a charter member of the Thomas J. Rusk Literary Society, formed in 1923 to foster public speaking and debate.

After graduation Avery went to work for Social Security until mandatory retirement at age 65. He and wife Rena, who met while students at SFA, had one child, Betty, a graduate of Baylor University. Though Avery and his wife eventually settled in Dallas and lived there for the rest of their lives, important family ties remained in Nacogdoches. Rena was related to J.E. Kingham, founder of the J.E. Kingham construction company, which built a big portion of the SFA campus.

Maggie Brown remembers her grandparents as a “second set of parents” and went with them for visits to Nacogdoches throughout her childhood. When it came time for college, SFA was a natural choice. When Avery passed in December 1977, Brown was taking her finals. The family waited until after she had finished to tell her the news.

Brown said she has plenty of memories of her grandfather, but one stands out from the rest.

“He always had his head in a book,” Brown said. “You knew education was important to him and his family. We are his legacy. We’re still here after all these years.”