While the onset of COVID-19 changed those plans, NAC has found a way to celebrate this anniversary safely and virtually. By recording living history videos and livestreaming readings, NAC was able to bring history to life.

The fight for the right to vote was a long struggle that officially began in 1848 with the Seneca Falls convention, which was attended by some 300 men and women. During the conference, Elizabeth Cady Stanton wrote the Declaration of Sentiments, which outlined the rationale for women's suffrage and was based upon the Declaration of Independence. Stanton's document was signed by 100 people, including 68 women and 32 men. 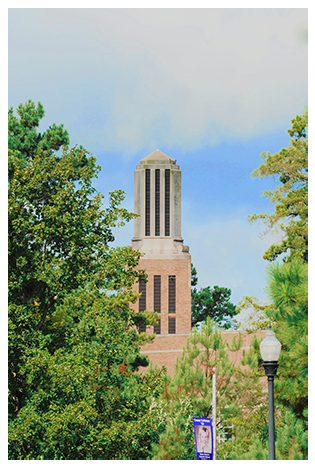 The 19th Amendment states the right of citizens of the United States to vote shall not be denied or abridged by the United States or by any State on account of sex. It was passed by Congress on June 4, 1919, ratified on Aug. 18 then certified on Aug. 26 of 1920, formally adding it to the U.S. Constitution and providing suffrage to all citizens.

Spearheaded by Carolyn Spears, director of SFA’s Stone Fort Museum, mass communication, theatre and history students collaborated on an oral history project about important suffragettes in October. Theatre students performed monologues of the women’s remarks, speeches and writings, which history students had researched. Mass communication students recorded and edited the videos, which are available to view below.

Amelia Bloomer (1818-1894)
Excerpts from “The Lily,” 1848, and her essay “Woman’s Right to the Ballot,” 1895
Bloomer believed those who willfully surrendered to authority should not concurrently have the right to a voice in political matters. Using her superb writing skills, Bloomer fought restrictions against women participating in politics. From 1849 to 1853, she published the newspaper, The Lily, which she described as the first paper “devoted to the interests of women.” Bloomer also advocated for change in women’s clothing. While she did not invent the loose trousers that became popular for women in 1859, the outfit became known as “bloomers” in her honor.
Performed by Kitty Hall
Research prepared by Angel J. Peralta

Minnie Fisher Cunningham (1882-1964)
Letter to Honorable Harry H. Dale, U.S. Representative from New York, 1916
Born March 19, 1882, in Texas, Cunningham was a women’s rights activist who worked especially hard for equal pay and women’s suffrage. Cunningham worked to alleviate poverty through the New Deal programs of the 1930s. She helped found the League of Women Voters and The Texas Observer. Additionally, she ran for the office of U.S. senator and later governor of Texas. She served in many state and federal capacities until her death in 1964.
Performed by Ashley N. Johnson
Research prepared by Elena Quintana

Mariana T. Folsom (1845-1909)
Speech, “What is Feminine,” 1898
Thompson was raised in Northumberland County, Pennsylvania, before moving to New York to attend St. Lawrence University. She earned a degree through the Universalist theological program and became one of the first women in the U.S. to be ordained as a Universalist minister. As a women’s rights suffragist, Folsom spoke to crowds in Texas, New York, Nebraska and Iowa throughout the 1880s. She and her husband, Alan Perez Folsom, settled in Texas in 1884 where she led the suffrage movement and became a major player in many women’s organizations, including the National American Woman Suffrage Association. Folsom died in 1909, leaving behind a legacy of hard work, wit and humor.
Performed by Grace Baker
Research prepared by Alissa Clark

Ida B. Wells-Barnett
Excerpt from “How Enfranchisement Stops Lynching,” Original Rights Magazine, June 1910
Wells-Barnett was an African American woman who advocated for both racial justice and women’s suffrage. She never backed down from a fight; no effort was too great. She marched alongside her white colleagues in the Illinois section of the 1913 parade for women’s suffrage when she was told to march in the back with other African American women. A prolific writer, she co-owned an African American newspaper, and founded the Alpha Suffrage Club in 1913.
Performed by Desiree Quinoes
Research prepared by Jayden Franke