In the 2014 - 2015 academic year, we graduated our largest class ever, sending another 2,690 Lumberjack alumni into the world. 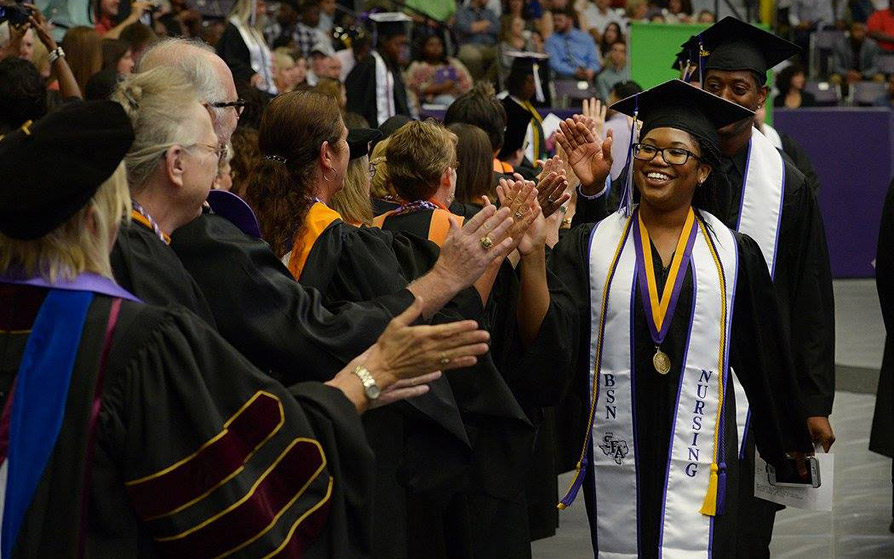 We’ve graduated thousands upon thousands of Lumberjacks since 1923. Today, SFA alumni make up a network of more than 100,000 individuals who are using their education to make an impact on the world. This impact spreads across the nation and around the world where SFA graduates live and work, making a name for themselves in business, sports, politics, entertainment, military and more.

Nancy Dickey (1972) is just one example of an SFA graduate making an impact. She was the first female to be elected president of the American Medical Association in 1997. And now she serves as the president of Texas A&M University’s Health Science Center.

Bill Owens (1973), the governor of Colorado from 1999-2007, is another SFA alum. So is songwriter Will Jennings (1965 and 1967), winner of the 1983 Academy Award and Golden Globe for his song Up Where We Belong from the movie An Officer and a Gentleman and winner of the 1997 Academy Award, Golden Globe and Grammy for the song My Heart Will Go On from the movie Titanic.

And don’t forget our scientists like Dr. Virginia Burkett (1997), who won the Nobel Prize for her work in climate change, and Joseph W. Kennedy (1935), the co-discoverer of plutonium in 1940.

A sample of our successful alumni

It would be impossible to list all the positive impacts from Lumberjack graduates. Here’s a small sample of some of our most notable successes.

Want to Network with Other Alums?