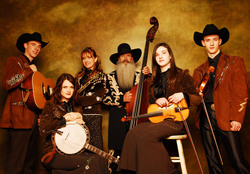 Cherryholmes, the International Bluegrass Music Association's 2005 Entertainer of the Year and regular performers on the "Grand Ole Opry," will present a Christmas concert at 7:30 p.m. Tuesday, Nov. 25, in W.M. Turner Auditorium as part of the SFA College of Fine Arts' University Series.

The six-member family began performing less than 10 years ago, as a therapeutic means of dealing with the death of the family's oldest daughter, Shelly, who died in her sleep at the age of 20.

Within that short span of years, they have received two Grammy nominations, been named the International Bluegrass Music Association's 2005 Entertainer of the Year and become regular performers on the "Grand Ole Opry."

All six musicians contribute to the creativity behind their distinctive style, taking turns singing lead and showcasing their individual talents.

For several years the band played weekend gigs and entered local contests, but by 2003 they had made their first appearance on the "Grand Ole Opry," Ernest Tubb's "Midnight Jamboree," the Country Music Association's Music Fest and the International Music Association's FanFest.

In 2005, Ricky Skaggs signed Cherryholmes to his Skaggs Family Records label, and the group's first two albums, "Cherryholmes" and "CherryholmesII: Black and White," both received Grammy nominations. In September, the group released "Cherryholmes III: Don't Believe." Visit www.cherryholmes.musiccitynetworks.com to learn more about the group and hear samples of its music.

"This promises to be a great concert," said John W. Goodall, associate dean of the SFA College of Fine Arts, "one we are excited to be able to bring to East Texas."

Prior to the concert Herb Midgley, SFA lecturer of music, and Tyler senior Lacie Carpenter will give an informative talk and demonstration on bluegrasss music at 7 p.m. in Griffith Gallery across the hall from Turner Auditorium.

The audience is invited back to the gallery after the performance for a reception honoring the event's corporate sponsor, Nacogdoches Medical Center.