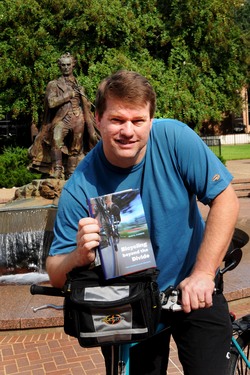 Daryl Farmer, assistant professor of English at SFA, shows off his new book "Bicycling Beyond the Divide," now available at barnesandnoble.com.

When Daryl Farmer first stumbled upon an article about bicycle touring in his high school library, little did he know how the next years of his life would change. After dropping out of college twice, the shy 20-year-old who had rarely left his home state of Colorado was ready for an adventure out west.

During the summer of 1985, Farmer bicycled more than 5,000 miles along the Great Divide and back with only minimal supplies and wanderlust. Although each day consisted of long hours of seemingly endless bicycling, every day was different, from where he stayed and whom he met to the ever-changing weather conditions.

"During the course of that summer, the temperature ranged from a low of 17 degrees in Colorado to 103 degrees in California," said Farmer, who recently joined the SFA faculty in the Department of English and Philosophy.

Farmer's encounters with the beauty of nature and its creatures inspired him along the way. He witnessed breathtaking sunsets, encountered bears and elk, and kayaked just feet away from Orca whales in San Juan. "Before the trip, I had never seen the ocean. When I got to the West Coast, I just took it all in."

Upon his return, Farmer had a newfound confidence and was in the best shape of his life. "Before the trip, I was so lost, and I came back focused and immediately started college. The bike trip also made me much more interested in physical fitness, which became my major," he said.

Twenty years later, he set out to do it all over again-same path, same bicycle but a completely different person.

"The second trip was harder physically but easier mentally. I was more mature and didn't have the extreme highs and lows. During the first trip, I would have moments of ecstasy where everything was new and fresh, and low moments of loneliness and depression," he said.

But even the second time around, the journey was unpredictable. "Everyone always asks-'Where did you sleep?' I slept wherever I could: in a tent on the side of the road, campgrounds, sometimes a motel and even a football field," he said laughing.

"Sleeping on the football field actually got me into trouble because my bike was stolen," he said. The bicycle was later recovered, but through the detour, he met one of the most interesting people who shared his own "spiritual journey."

Keeping a daily journal of his experiences during his first trip got Farmer interested in writing. "On the first trip, I had no idea I wanted to be a writer. I kept a journal to record and remember the experience for later but never had the intention of sharing it with anyone but close friends," he said.

"I realized how much writing enhanced the trip, being able to look back on days past and reflect on my feelings and experiences."

The stories in his journals eventually became the topic of his new book, "Bicycling Beyond the Divide," which recently received a Barnes & Noble: Discover Great New Writers Award.

More than 23 years and thousands of miles later, Farmer resides in Nacogdoches and teaches creative non-fiction writings classes at SFA. "After interviewing with the English department, we just clicked and [SFA] had a good feel to it," he said.

With his unique philosophy on teaching, frequently combining nature and human experience, Farmer teaches his students to think creatively.

"Language is a joy for me, like an artist's medium. Like a potter works with clay, I like to shape the language to recreate the experience in a way that I hope will connect with people. That is the real challenge for a writer," he said.

Farmer will help in directing a new reading series on the SFA campus in which famous writers and poets share their work. On Nov. 6, award-winning poet B.H. Fairchild will visit the campus as a guest of the series.

Farmer's current writing projects include a novel and a non-fiction book, both inspired by his love of travel.

One of the biggest life lessons he learned while traveling is the importance of always searching for the good in people. "It is so easy to surround ourselves with TV and Internet, and it tends to make you cynical about the world. But if you go out into the world, you find that people are almost always good, helpful and nice," he said.

"Everyone has a story. As a writer, I love finding out about peoples' stories and retelling them to an audience."