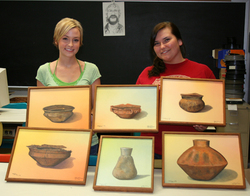 SFA students Andrea Locke (left) and Kate Robinson display some of the 23 paintings of sacred Caddo burying vessels that will be included in an exhibit opening Oct. 23 at the Mission Dolores Visitors Center and Museum in San Augustine. A sketch of the late Dr. James E. Corbin, an anthropology professor at SFA who excavated the original vessels in 1985, is shown in the background.

An exhibit that pays tribute to the Caddo culture through paintings of sacred burial vessels and informational panels will be on display beginning next week at the Mission Dolores Visitors Center and Museum in San Augustine.

The vessels were originally excavated in 1985 at the Washington Square site in Nacogdoches by the late Dr. James E. Corbin, an anthropology professor at Stephen F. Austin State University. The vessels were painted by Lufkin artist Charlie Becker in 1993 and 1996, and the artwork is being shown with permission from the Caddo Nation.

Information about both the professor and the artist also will be included in the exhibit, along with informational panels on Caddo pottery vessels, excavations at Washington Square, and the Native American Graves Protection and Repatriation Act.

"Remembering the Caddo: A Look into the Past," will open at 4:30 p.m. Thursday, Oct. 23. At the opening, representatives of the Caddo Nation will share their perspective on the sacred vessels with visitors. The exhibit will remain on display through February.

Locke and Robinson also recently volunteered at the Caddo Mounds Archaeology Fair in Alto, where they observed traditional Caddo dances. The students will be interviewed about the exhibit at 8:30 a.m. Friday, Oct. 17, on 92.5 KCOT and KQSI.