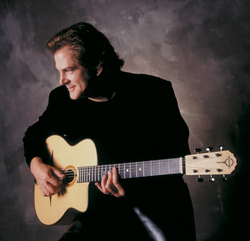 "Jorgenson, known as one of the pioneers of the American gypsy jazz movement, and his band of world-class musicians infused Turner Auditorium with incredible energy and music two years ago," explained John W. Goodall, associate dean of the SFA College of Fine Arts." We are truly excited to bring the group back to Nacogdoches so that even more East Texans can experience the musical genre inspired by Django Reinhardt."

Jorgenson has long been regarded as an accomplished and talented guitarist by rock, pop, country, classical and bluegrass musicians. A former member of the award-winning Desert Rose Band, The Hellecasters and the Elton John Band, Jorgenson has also recorded and performed with such diverse artists as Sting, Bonnie Raitt, Luciano Pavarotti, Barbra Streisand and Peter Frampton, with whom he shares a 2007 Grammy.

Dave McCarty of "Flatpicking Guitar Magazine" wrote that Jorgenson "executes seemingly impossible licks and runs not just without flaw, but with the passion and grace only the most talented and devoted musicians ever achieve."

"The audience will be amazed by John's dazzling guitar work, but also by his searing clarinet playing, his vocal talent and his original compositions," Goodall said.

Joining Jorgenson on stage will be Kevin Nolan on rhythm guitar, Jason Anick on violin, Charlie Chadwick on double bass and Rick Reed on percussion.

The quintet was originally assembled to promote the 2004 release "Franco-American Swing," explained the group's agent. "Since then, the quintet has evolved into a commanding concert act, thrilling audiences at such prestigious and diverse international venues as the Montreal Jazz Festival, Merlefest, Winnipeg Folk Festival and Lincoln Center, and is the only American act to have headlined the Django Reinhardt Memorial Festival in France."

To hear samples of the group's music, visit www.johnjorgenson.com.

Prior to the concert, Herb Midgley, SFA lecturer who teaches applied guitar, history of jazz and history of rock and roll, will deliver a short lecture at 7 p.m. in Griffith Gallery, across the hall from Turner Auditorium. The audience is invited back to the gallery after the concert to meet the musicians and honor the event's corporate sponsor, Cataract, Glaucoma & Retina Consultants of East Texas.

W.M. Turner Auditorium and Griffith Gallery are located in the Griffith Fine Arts Building, 2222 Alumni Dr. on the SFA campus.