Nacogdoches native graduates from SFA at 19 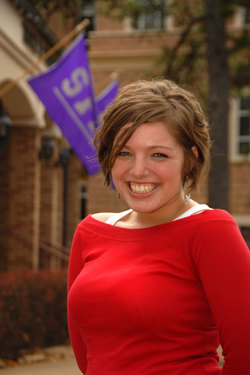 Passion for learning, a drive to succeed and careful planning have led one Stephen F. Austin State University student to graduate at the age of 19.

Nacogdoches native Jackie Pierce will receive her bachelor's degree in special education at Saturday's commencement ceremony after only two and a half years at SFA. According to university records, fewer than a dozen students have graduated from SFA at the age of 19 in the last two decades.

Pierce began auditing classes at SFA when she was only 14 and later took dual-credit courses while being home-schooled. While at SFA, she took between 18 and 19 credit hours per semester and 15 hours each summer. Not only did she take on a full-load of college courses, but she also supported herself with a full-time job.

The honor graduate credits her success to staying organized and planning exactly which classes to take from the beginning, as well as having a good relationship with her adviser. The aspiring special education teacher said she was driven to complete school so quickly because of the anticipation of having her own classroom and children to teach.

"I love special education. There is just something amazing about those kids," Pierce said. She is currently working on a math certification so that she can specialize in teaching math skills.

Another driving factor for her success has been her mother, M.E. McWilliams, who Pierce calls "her backbone." McWilliams is the director of SFA's award-winning Academic Assistance and Resource Center.

"She has always believed in me and supported me through all the ups and downs in my life," Pierce said. "I couldn't have done it without her."

In what little spare time she has, Pierce enjoys clogging, scrapbooking and photography. She considers herself "just a normal girl" and a "social butterfly."